The Golden State Warriors are coming off the best regular season in the history of the NBA, knocking off the famed Jordan-era Bulls squad with 73 wins.

Warriors' guard Stephen Curry has won the NBA MVP award two years in a row, including the first ever unanimous vote this past season. He is joined on the team by Klay Thompson, who is coming off the third best three point shooting season all time (Curry holds the first two spots) and also holds the NBA record for most points scored in a single quarter; Draymond Green, who is the reigning defensive player of the year; and Andre Iguodala, who was the front man for the 76ers for years, and has been an impressive spark both as a starter and off the bench for Golden State.

And now they're adding another former MVP winner, a perennial athletic powerhouse, and arguably the best all-around scorer in the NBA: Kevin Durant. 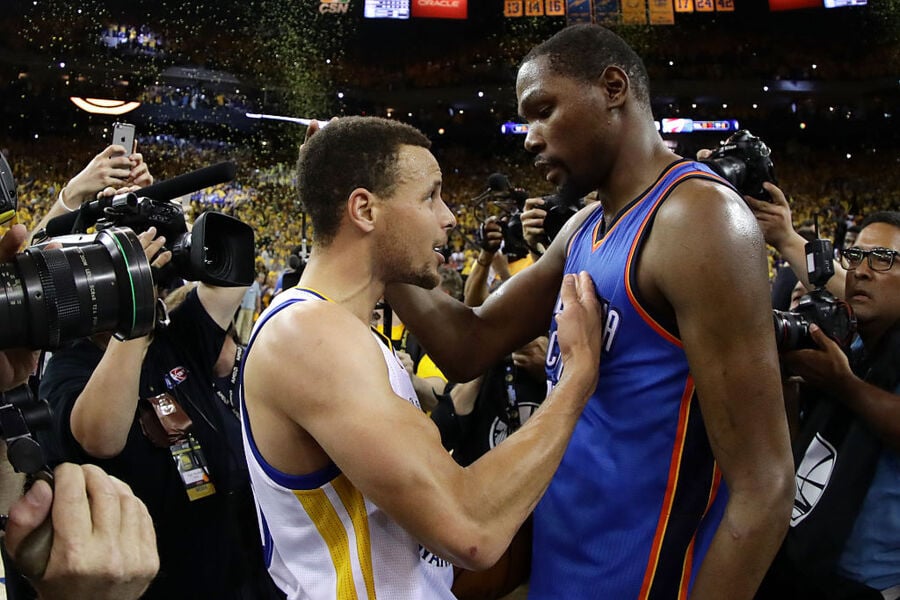 Durant won the NBA MVP award in 2014. This past season, he led his Oklahoma City Thunder squad within one game of the NBA Finals, losing to his new team in Game 7 of the Western Conference Finals. On the season, he averaged 28.2 points, 8.2 rebounds, and 5 assists. In his official statement of intent to join the Warriors, he gave some compelling reasons for his decision:

"The primary mandate I had for myself in making this decision was to have it based on the potential for my growth as a player—as that has always steered me in the right direction. But I am also at a point in my life where it is of equal importance to find an opportunity that encourages my evolution as a man: moving out of my comfort zone to a new city and community which offers the greatest potential for my contribution and personal growth."

In his search for a home, he met with the Warriors, Thunder, Clippers, Heat, Spurs, and Celtics, finally coming to rest in Golden State. In order to rein in the 27 year old superstar, the Warriors will reportedly sign him to a two-year deal worth about $54 million. The contract is expected to be finalized on July 7.

But there's one nagging question: how were the Warriors able to build a team this stacked with talent? It's not often that a team wins a championship one season, sets an NBA record for wins in the next season, then signs a new superstar that offseason. How could this happen?

First of all, the NBA salary cap jumped by over $20 million from last season to this season. Each team has about $94 million to spend. That freed up room for everyone to take a few big steps toward building a winning squad.

Second, Steph Curry is making pennies compared to his superstar counterparts. In 2012, the Warriors locked Curry in to a four year contract worth $44 million. The man who has won two consecutive MVP awards isn't even in the top 50 NBA players in terms of salary. With Durant added, he'll be the fourth highest paid player on the team after Durant, Thompson, and Green. At the end of this season, he'll be an unrestricted free agent; but for now he's not making nearly what he's worth, allowing for the Warriors to make a big offer to Durant.

Third, the Warriors will lose some of their supporting talent. The most impactful of those players is the young and gifted Harrison Barnes, who spent much of the season in the starting lineup. He will likely play for the Mavericks this season. In addition to Barnes, the Warriors will probably part ways with Andrew Bogut, Festus Ezeli, and potentially Shaun Livingston.

But there is one more question on the minds of the basketball purists out there: what about team chemistry? Historically, the downfall of the "dream team" has been an inflation of ego leading to a lack of team unity. Thus far, it seems like the Warriors have been immune to this syndrome, and only time will tell if they stay that way.

One thing is for sure, though: the Warriors are the team to beat.