Oklahoma City Thunder is going to have a long off-season. Not only did they lose their Western Conference Finals series against the Golden State Warriors after taking a commanding 3-1 series lead, they now have to deal with the possibility that Kevin Durant will bolt for another team. Losing a series hurts, but losing a former MVP? That stings.

Fortunately, unless Durant is crazy, he's going to stay in Oklahoma City, at least for one more season. He'd be crazy not to – not just because he likely would be joining a team that's worse than the Thunder, but also because he'd be saying goodbye to a huge amount of money.

Thanks to the way NBA contracts work, Durant's current team, the Thunder, can offer him more than any other team. The Thunder can offer Durant a five-year contract, starting at $25 million annually, with 7.5 percent annual raises. Meanwhile, if he jumps to another team, he can only sign a four-year contract for $25 million annually, and his yearly raises will only be 4.5 percent.

Already, that's a big advantage for the Thunder: Durant would make $149 million over five years if he re-upped with Oklahoma City. If he signed with any of his other potential suitors, he'd make a projected $111 million in a four-year contract. 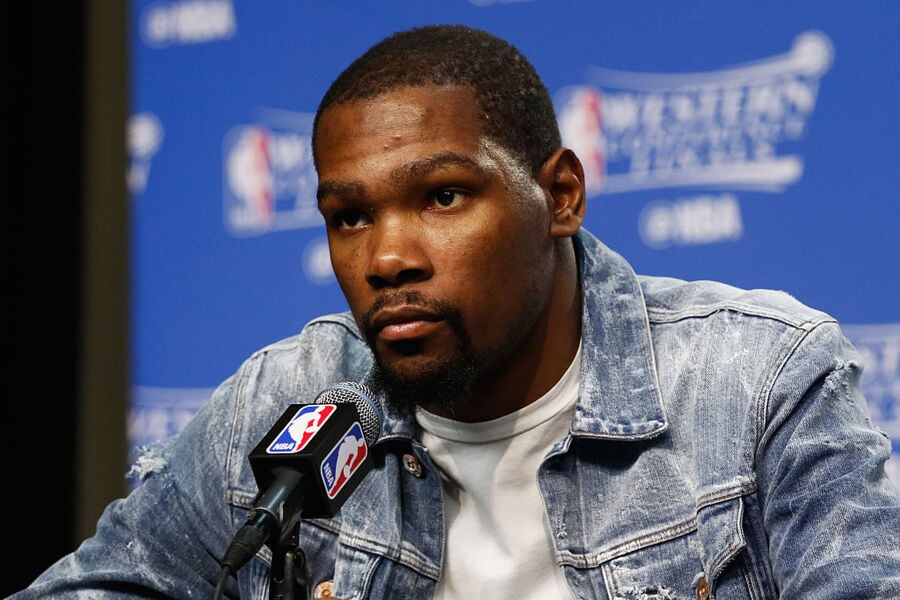 However, Durant actually has a better option than signing a long-term deal now. If he goes the "LeBron" route, he stands to make significantly more money, especially as the salary cap is set to balloon after next season.

Since returning to Cleveland, LeBron James has signed a pair of two-year deals, opting out after the first season last year, and likely doing the same after this season. It doesn't necessarily mean he's leaving the Cavaliers, he's just simply maximizing his earnings. Durant would be wise to do the same.

If KD signs what is essentially a one-year deal, he'll make $25.9 million next season. Then, the Thunder could offer him a max deal starting at $35.1 million in 2017-18 and reaching $45.7 million in 2021-22. That would net him in the neighborhood of $228 million over the next six years. Durant would be saying goodbye to about $52 million by signing with anyone else besides by the Thunder.

There are a couple of other reasons that it's in Durant's best interests to sign a smaller deal. First, once a player has been in the league for 10 years, they're eligible to make 35 percent of the salary cap – that's a max deal. Durant just finished his ninth season in the league, so a max contract for him currently is just 30 percent. The projected salary cap for next year is $92 million, and it's expected to jump up to $107 million by 2017-2018. By waiting an extra year, Durant can earn an extra five percent of an already larger amount of money, which is a win-win.

The other reason it makes sense, is purely from a basketball perspective. Durant's All-Star teammate, Russell Westbrook, is entering free agency after next season. If Durant signs a long-term deal now and then Westbrook leaves, Durant has essentially handcuffed himself to an average (or even worse) team for several years. By agreeing to a deal that lets him opt out after a season, Durant can give it one more go with this great Thunder roster, then assess the league landscape in 2017.

Whatever he decides to do, Durant is going to make a lot of money. But if he really wants to maximize his earnings, he should keep his mind set on the short term.