When a player who's just won the Super Bowl gets interviewed, they might say "I'm going to Disneyland!" The Kansas Jayhawks men's basketball team won this year's NCAA Tournament, but they're not going to Disneyland — instead, they're just headed across the state to Wichita.

After a thrilling 72-69 comeback victory over the North Carolina Tar Heels, Kansas is cashing in. The players are joining a Barnstorming Tour. The tour is presented by 6th Man Strategies, and it's taking advantage of the NCAA's recent rule that allows players to profit off their name, image, and likeness (NIL).

This is the first year the March Madness champions can earn money. That means fans can meet the Jayhawks' starting five of Christian Bruan, David McCormick, Ochai Agbaji, Dajuan Harris, Jr., and Jalen Wilson. Head coach Bill Self is not expected to attend, giving the players a chance to shine. 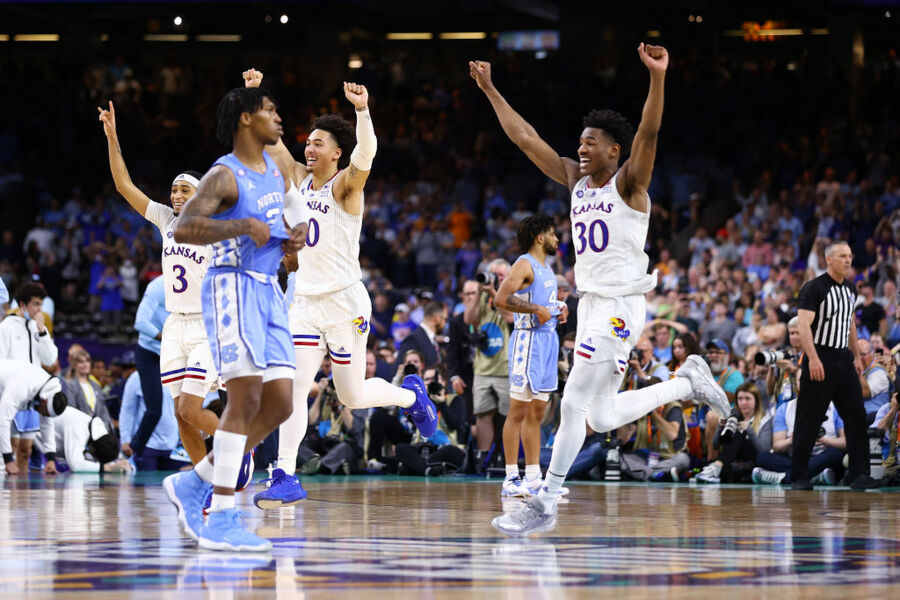 Tickets to the April 23 event start at $30, which include autograph signings, an interactive player camp, a Q&A session, a silent auction, and an exhibition game. Other tickets cost between $75 and $125 and include better seats for the game and a VIP dinner with the players.

Though there's only one date on the tour so far, 6th Man Strategies has hinted there could be additional stops in Topeka, Dodge City, Kansas City, and other locations.

Tickets for the UNC event are limited to 200 seats per stop, at $100 per ticket. The Tar Heels sold out the opening location in Gastonia, NC.

Let's do a little quick math here: those 200 seats selling for $100 means $20,000 for the initial UNC event. It's not out of the realm of possibilities that the Tar Heels could draw a similar (or larger) crowd in additional cities. But all things remaining equal, even just a five-stop tour would equal $100,000.

Of course, the players won't earn 100% of these earnings, and the totals are nowhere near what someone could make in the NBA, or even overseas. But not everyone is graduating or pursuing pro ball — and a year ago, the most they could have made was zero dollars.

It's great the NCAA is finally letting them earn money from their performances on the court. Now, they get to keep those stars shining as they head out on tour.