Thanks to the Washington Redskins, he will be.

Carolina was hoping to hold on to Norman. By putting the franchise tag on him, the team guaranteed him a pretty hefty pay raise (from $1.5 million in 2015 to roughly $14 million next season) and gave the front office more time to negotiate a long-term deal. However, according to the rumor mill, the two sides were never close. Carolina made one offer in the $11 million-a-season range, while Norman wanted $14-16 million. When it became clear to Panthers General Manager Dave Gettleman that a deal wasn't going to happen, he decided to let Norman go now, rather than wait until after next season.

They could have used him next season, but they could also use the salary cap flexibility that rescinding his franchise tag would create. So Gettleman pulled the tag – and within hours, Norman's agent was contacted by numerous teams with several rumored to have a serious interest.

With the draft coming up, Norman wanted to have a deal done soon, so he wasted no time sifting through his suitors. By Friday afternoon, the rumor mill had the New Orleans Saints and Washington Redskins as the front runners. 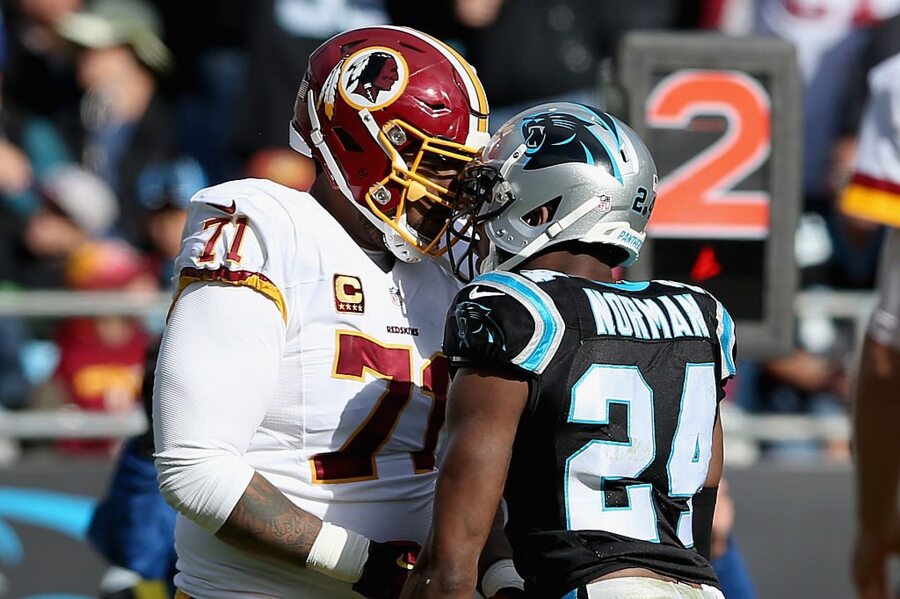 Early Friday evening, the news spread that he had agreed to a deal with the Washington Redskins! "It came out of nowhere. It really did," Norman told "Redskins Nation" Friday night. "I got sideswiped – I didn't see it coming."

The terms of the deal were exactly what he was looking for, five years for $75 million, with $50 million guaranteed. With a per-season average of $15 million, he edges out Patrick Peterson to become the highest-paid cornerback in the NFL. No other defensive player has ever had as high a percentage of his contract guaranteed, either (66.7 percent).

Of course, the immediate concern for Redskins fans will be whether this is going to be another expensive free agent bust for their team, or a real playmaker. Washington Owner Dan Snyder has been known to overpay for talent in the past. Did he do it again? Maybe. There has to be a reason why the Panthers were willing to let him walk. Could it be because they were concerned about his age (he'll turn 29 during next season), or is it something more fundamental? Then again, the Redskins front office was smart enough to work a little protection for the team into the deal. The contract includes a team option that will allow them to cut Norman and his hefty salary loose after the 2017 season.

What that essentially means, is that the contract is really a two-year deal, with $36.5 million guaranteed. Should they decided to pick up his option by March 2018, another $13.5 million (his salary for the 2018 season) becomes guaranteed, and the final three years of the contract become active.

It appears that the Washington Redskins may have actually learned from past mistakes (Albert Haynesworth), and with good reason. Norman was not very good as a rookie. He was inactive for five games during his sophomore season and played in only seven. In spite of losing two cornerbacks in free agency prior to the 2014 season, he began the year as a back-up. It wasn't until week eight that he became a starter again.

So Norman has not been a starter for long (just a season and a half). There is no telling if his dominance will continue. If it doesn't, he wouldn't be the first high-priced defensive back to switch teams and turn out to be a complete flash in the pan (right, Nnamdi Asomugha?). He will get the chance to prove he's worth his hefty contract right out of the gate next season. During the first three weeks, he'll face Antonio Brown, Dez Bryant, and his old "friend," Odell Beckham Jr.