Could Jim Harbaugh Be The Next Coach Of The Los Angeles Rams?

With the playoffs looming, there are very few things that are certain in the NFL these days. Here are a couple of things that are certain: The Browns will get another great draft pick (and probably squander it), the Patriots have a great shot at winning another Super Bowl, and the Los Angeles Rams desperately need a change – and fast.

The Rams started on the path to change by firing head coach Jeff Fisher, who was obviously leading them down every wrong path he could find. The franchise, fresh off a move to L.A. from St. Louis, has made some decent draft choices, has a franchise running back and a great defense, and appears poised for success… but they're missing one extremely important piece of the puzzle: a good coach.

Sure, there are a lot of coaches out there. For instance, there's Hue Jackson, the Bengals' Offensive Coordinator. Or, they could go with either one of the Coordinators from the Patriots, Josh McDaniels or Matt Patricia (I mean, they have to be good after a few years under Belichick, right?), or Todd Haley, Offensive Coordinator of the Steelers. But none of those guys is time-tested. They simply don't have the head coaching experience – the proven ability to win – that the Rams need to see in their dire situation.

There is one guy who stands out: Jim Harbaugh.

Pros: Harbaugh is a proven winner at every level. He's hard-working, he cares about his players, and he loves to win.

Harbaugh stepped in to coach the San Diego University team back in 2004. At the time, he had zero head coaching experience. He stayed with the squad for three years, posting a 15-1 conference record with two conference titles, putting him on the shortlist for best coach of all time at the school. 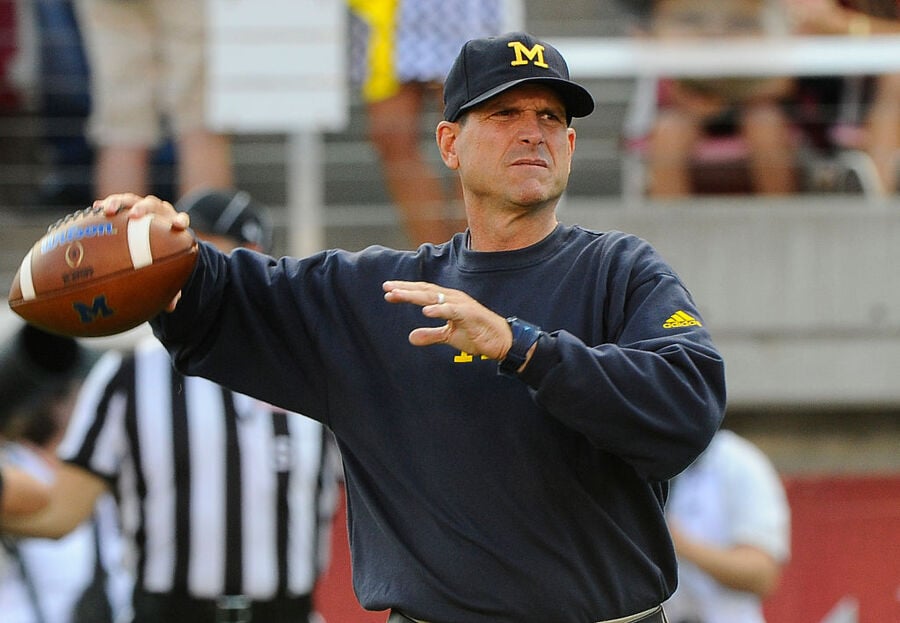 He then moved on to Stanford University. The two guys before him had gone a combined 16-40 in the past four seasons. Harbaugh came up huge, improving the team's record each season, and culminating his Cardinal career with a 12-1 record in 2010, with a victory in the Orange Bowl to cap it off. All told, he was 29-21 at Stanford. Outside of current coach David Shaw, that's the best winning percentage for a Stanford coach since the 60s.

After that, he took over an awful 49ers team that had gone 6-10 the year before he arrived, and hadn't had a winning season in 8 years. What did he do? Took them to three straight conference championships and one Super Bowl. After one tumultuous season where disagreements between the coach and the front office reflected poorly on the team's record, the 49ers inexplicably gave him the boot.

Now he's at Michigan, where he's the highest paid coach in college football, and for good reason. The year before he arrived, the Wolverines were 5-7. In his first two years with the team, he's taken them to a 20-5 record, and they'll be competing this season in the Orange Bowl.

Cons: Well, there's really only one. It's uncertain whether or not he'll actually want to come back to the NFL (even though he definitely prefers the NFL to college). It's estimated that, to get him to L.A., it would take a contract worth between $10 million and $15 million per year! That would make him the highest paid football coach at any level.

So, is it worth that much money for the Rams? Absolutely.

One major issue is that the Rams need a change right now. It's highly likely that the Chargers will be headed to L.A. from San Diego, and about 25% of the Chargers' season-ticket holders already live in L.A. Honestly, right now, given the choice between a Rams game and a Chargers game, which would you rather see? Yeah, that's what I thought.

The Rams need dynamic change, and they need it right now. Harbaugh is almost certain to give them that.

The team's owner, Stan Kroenke, is worth almost $8 billion, and he's pouring a huge amount (over $2 billion) into the Rams' new stadium. For that investment to make any sense, he needs to hire a coach who will direct a team that will fill the seats. The price tag is unimportant.

The question is: how long will it take before Kroenke heads out to Michigan to make an offer? And when that day comes, will Harbaugh take the bait?