When Did J.J. Watt Become The Most Valuable Player In The NFL (Financially And Athletically)?

Even if you're just a casual fan of football, you probably recognize the name J.J. Watt. After all, the Texans' defensive lineman is now one of the best players in the league – the best, in fact, according to NFL Network's poll of NFL players. And ESPN recently asked 71 NFL reporters and analysts their opinions on which players they rank as the best. Once again, Watt came out on top, just beating out Packers QB Aaron Rodgers.

Watt's success on the field has translated to endorsements off of it, too: he's done commercials for Gatorade, Papa John's and Reebok, and is the biggest star of HBO's Hard Knocks, the reality show that follows an NFL team around before the regular season. Thanks to Watt's presence, the show has had its best ratings in years. 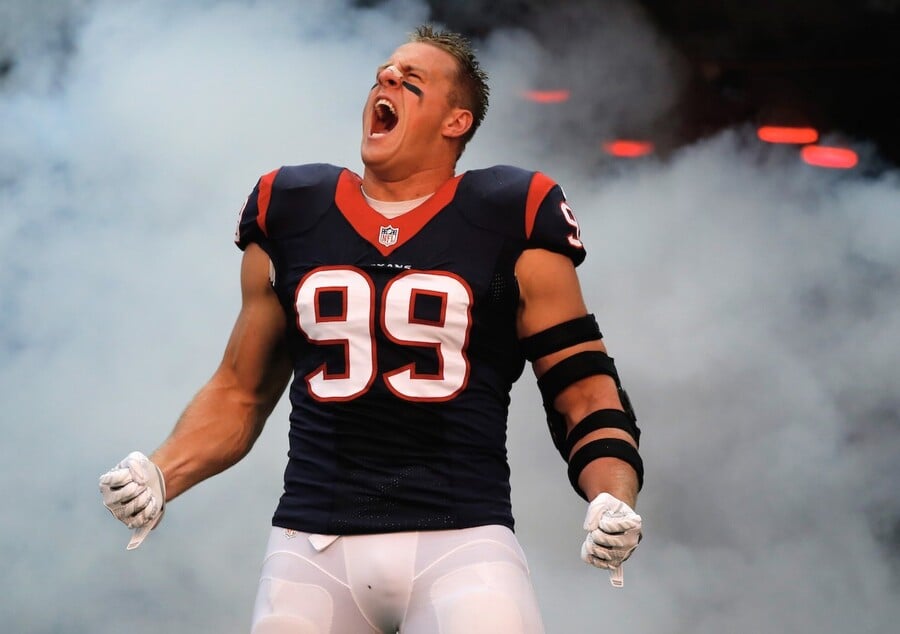 But it wasn't always this way. When he first entered the league out of Wisconsin, Watt was mostly an unknown commodity. How has he built himself into a top – if not THE top – brand in all of football, with a net worth of $10 million?

Really, it all started back in 2012. Watt appeared with two other teammates in a commercial for HEB, a Texas grocery chain. He wasn't mentioned by name, but did have a line commenting that a burger was "looking 100 percent delicious." The same year, during an airing of an "NFL Honors" show that aired before the Super Bowl, a game microphone caught Watt telling then-Ravens running back Ray Rice, "I've eaten burritos bigger than you."

That line caught the attention of Jeff and Jackie Schaffer, creators of the show The League on FXX. The show is all about fantasy football, and they asked Watt to appear in a 2013 episode. It certainly helped that he had just won the Defensive Player of the Year award, too. He nailed his role, and it only exposed more people to the Texans' star. Though what Watt has done away from the cameras is even more impressive.

During his rookie season in 2011, three kids in the Houston area became orphans after their parents were killed in a car crash. The Texans were contacted and asked if they could send a player to visit them; though the team apologized and said they couldn't, Watt went on his own to help console the children, and still visits them to this day.

Watt is a big supporter of other Houston sports, too. He supported and befriended Craig Biggio, the Astros' first Hall of Famer, and welcomed Astros star prospect Carlos Correa to the city via text when the 2012 first overall pick was called up to the majors. Watt complained about referees during a Rockets playoff game this past year, echoing the sentiments of other basketball fans.

Watt's charm and genuine interest in other people have led to requests for appearances at all kinds of events. He's been asked to make appearances at graduations and bar Mitzvahs, officiate weddings, and give commencement speeches at high schools, colleges and nursing schools. Between his own JJ Watt foundation, Creative Artists Agency (who represents Watt), the Texans' PR staff, social media and fan interaction with the Texans' community relations and marketing departments, Watt receives roughly 450 requests per week for appearances, autographs, charity visits, endorsements, media requests and other favors. Along with his mother, Connie Watt, and others in his foundation, J.J. works diligently during the off-season to see which requests he can grant. His foundation typically supports middle school athletics in Wisconsin and Texas, and Watt had special guests at all six Texans training camp practices that were open to the public this year.

Of course, Watt's propensity for helping others has led to a barrage of attention, not all of it good. Fans will camp out on his lawn or gather around his car in a parking lot, and people have been vocal in their criticism that Watt is doing all of these good deeds simply for attention. Because of that, Watt has started declining requests to cover his visits with fans, and asks reporters to refrain from reporting on stories of his good will.

Watt, 26, earns between $2.5 million and $3 million a year in endorsement money – not nearly at the level of some of the top quarterbacks in the game, but quite high for a defensive player. In fact, it's estimated that Watt has more deals than any defender in NFL history. And he does it all without selling space on his Twitter feed for endorsed or sponsored posts. All of this is without ever making it to an AFC championship game, let alone the Super Bowl.

Though he's always maintained that he'd like to retire from the limelight after his playing days are done – Watt's ideal post-season scenario would be returning to Wisconsin to coach high school football – his rising star may not allow for that. In addition to his comfort in front of a camera, quick wit, sharp business acumen and overall likability, at 6'5″ and 288 pounds, he's simply a very large and noticeable man. It's going to be hard for the public to let go of Watt, and it's going to be even harder for him to just blend in with the crowd.

On top of his appearance in The League and a slew of commercials, he's also cameoed in New Girl and an upcoming film directed by Oscar-winner Ang Lee. That film role is the only one yet where he hasn't played himself. He finished shooting in just one day. The rest of his parts don't require a ton of creative flexibility, since it's just him, appearing as J.J. Watt, but he still accomplished all of those in just a few days. He's a man who gets things done quickly.

Regardless of what happens on the field, it looks like there's more in store for Watt outside of football. Thanks to his CAA connections and a video of his teammates doing impressions, he scored a meeting with Arnold Schwarzenegger. Meetings like that only further grow Watt's brand.

Could we possibly see J.J. Watt in the next installment of the Terminator franchise? It's not too far-fetched. Besides, Watt is nearly as strong as a machine already.