Inside Matt Rhule's Massive Contract With The Carolina Panthers

Matt Rhule has a history of turning teams around. At Temple, he took the Owls from a 2-10 record to back-to-back 10-win seasons in just four years. Then at Baylor, he inherited a one-win squad, the laughingstock of the Big 12. Two years later, the Bears finished 11-3, making an appearance in the Sugar Bowl this season.

The Carolina Panthers are hoping Rhule can work that same kind of magic at the NFL level. And they're paying him a ton of money to do so. The Panthers offered Rhule a seven-year, $60 million contract, with incentives that could possibly bump the deal up to $70 million.

Rhule made $4.1 million this year at Baylor. The Panthers paid a $6 million buyout simply to hire Rhule away from the university. 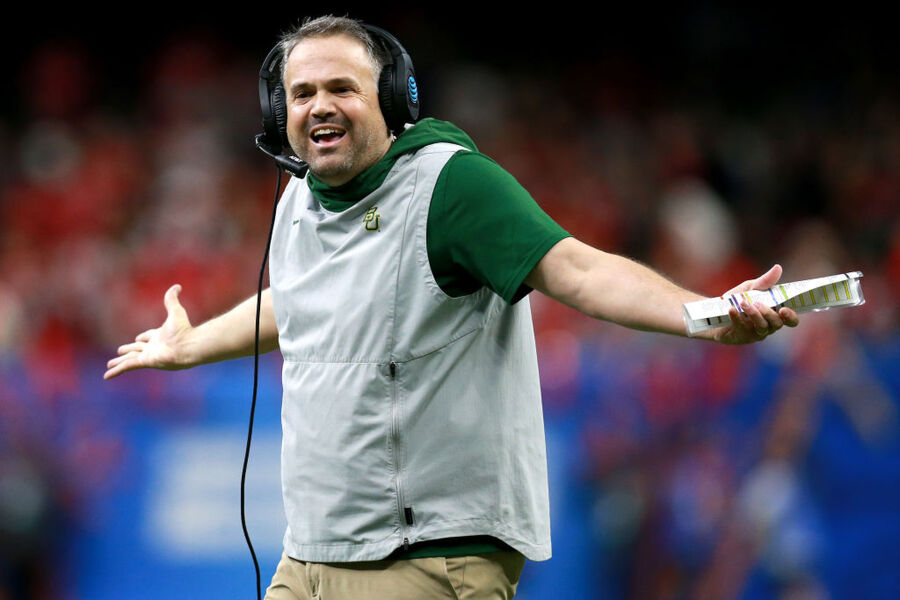 Panthers owner David Tepper said he appreciated Rhule's enthusiasm for sports science. He also joked that both men dress terribly, so it's a natural fit.

And Carolina has also struggled since making the Super Bowl in the 2015 season. The team finished 5-11 this year, its third losing season in four years.

The Panthers have never hired a collegiate coach before Rhule. All the other candidates they considered are currently employed by NFL teams. Rhule spent one season as an offensive line assistant coach with the New York Giants in 2012 before heading to Temple.

Rhule takes over for Ron Rivera, who was fired during the season. Rivera is the winningest coach in Panthers history, amassing a record of 76-63-1 since 2011. The Washington Redskins named Rivera their head coach in late December.

As for Rhule, he brings an offensive mindset to the Panthers, particularly the run-pass option. It's the latest trend in the NFL, but Rhule may not know who will be running it. Franchise quarterback Cam Newton is rehabbing from Lisfranc surgery on his left foot. He missed all but two games last season, and there's no timetable on his return. Making matters even more complicated, Newton is a free agent after this upcoming season.

But Rhule has never met a challenge he didn't want to take. If he can get the Panthers back to the Super Bowl, it'll be his greatest turnaround effort yet.