I am not a hockey fan, or generally a fan of live events, but I have been to several Pittsburgh Penguins games because I have family in the area and they periodically get incredible tickets. Watching a professional hockey game is SO MUCH FUN. Hockey is hands down the best in-person professional sport to watch live. In a single game a few years back I saw two fights, drank three beers and threw my hat on the ice with a thousand other fans after Sidney Crosby pulled off a hat-trick. It was amazing.

As you may know, the most-famous Pittsburgh Penguin player of all time is Mario Lemieux. And sure, Mario's professional stats – which include two consecutive Stanley Cups (1991 and 1992) – are impressive. But to me, the editor of CelebrityNetWorth, Mario's most accomplishment is the story of how he became the majority team owner… 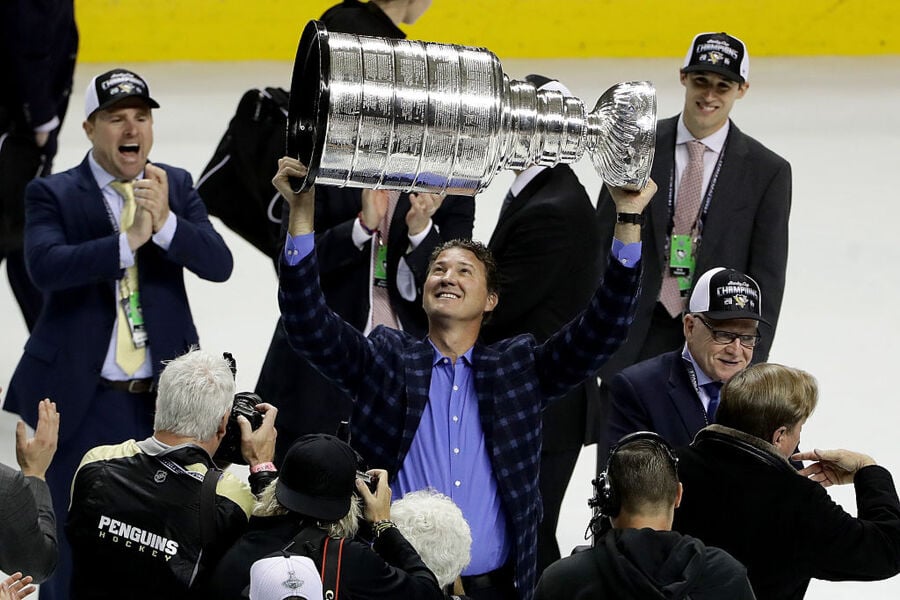 An Offer They Couldn't Refuse

The late 1990s were an extremely tough period for the Pittsburgh Penguins. Throughout the early 1990s the team spent way beyond its means. By 1998, the team's owners Howard Baldwin and Morris Belzberg had wracked up $90 million in debt to a variety of creditors.

In November of 1998 the team was forced to declare bankruptcy. And who was the team's biggest creditor?

As it turned out, during his playing days Mario had been deferring millions of dollars from his contracts to be paid in retirement, Bobby Bonilla-style.

At the time of the bankruptcy filing the Penguins owed Mario…

Mario knew that forcing the team to honor that debt was likely a losing proposition for two main reasons: First, the team might be able to skate from the debt entirely through the bankruptcy filing. And secondly, seeking full payment would force a team sale to new owners, and that would likely mean moving to another city. Mario couldn't let that happen.

So Mario went to trustees overseeing the team's bankruptcy with an offer.

Mario offered to convert $20 million of the debt into team equity PLUS he asked for $5 million in cash for operating expenses.

He also wanted the opportunity to put together a new team of investors to buy out the entire franchise. He also promised to keep the team in Pittsburgh.

The United States bankruptcy court agreed to the terms and the NHL gave its stamp of approval in September 1999.

Next, Mario went out and got a group of investors, led billionaire Ron Burkle who chip in $20 million, to buy the Penguins for…

A year before the sale the Penguins were valued at $132 million. So they got a good deal right out of the gate.

In exchange for converting his $20 million compensation and putting the deal together, Mario Lemieux came out of the negotiations with a 25% ownership stake in Penguins. Burkle had 19% and the rest was divvied up between a few dozen different smaller investors.

Over time Lemieux's stake was increased to around 40% and Burkle jumped to 25%.

Mario was the very first retired NHL player to become majority owner of a team.

Over the next two decades, the team's fortunes shot way back up. The year before he took over, the Penguins lost $16 million. In his first year as owner the Penguins posted a $47,000 profit. In recent years the team has earned over $160 million in revenue.

The team still owed $60 million to various other creditors. Mario and the team could have used the bankruptcy proceeding to negotiate the debts down to pennies on the dollar.

Mario insisted the organization pay every penny it owed. Dollar on the dollar.

By 2005 all pre-sale debts had been cleared.

Even after COVID delivered a brutal blow to Hockey franchise revenue in the 2019-2020 season, the Penguin's minimum book value today is $600 million.

And that's the minimum book value.

Earlier this week it was confirmed that Mario was in advanced sale talks with Fenway Sports Group LLC, the company that owns the Boston Red Sox, Liverpool F.C. and a NASCAR team.

The deal is not done and the terms have not been announced, but most outlets are estimating a sale price of…

If that happens, Mario's 40% stake will turn into a $360 million windfall.

Not a bad trade for $20 million twenty years ago!

Congrats to Mario Lemieux and the entire Penguins organization. I look forward to attending more games in the future!

Oh, and before you go, Mario isn't the only professional athlete who thought about converting deferred salary into team ownership in the late 1990s. Back in 1998, NFL quarterback John Elway was given the option to convert $21 million in deferred salary plus $15 million in cash into a 25% stake in the Denver Broncos. At the time the Broncos were valued at $180 million.

Today the Broncos are worth $3.75 billion.

So had John accepted the deal, today his 25% ownership stake would be worth $937.5 million 🙁