Super Bowl weekend is upon us, and we're all set up for a fantastic matchup. Patrick Mahomes and Andy Reid will try to lead the Kansas City Chiefs to a second consecutive Super Bowl victory, while Tom Brady is hoping to win his seventh Super Bowl—and his first with his new team, the Tampa Bay Buccaneers, led by head coach Bruce Arians.

Beyond the championship glory, there are some hefty incentives on the line, too. For example, if the Buccaneers win, Brady will earn an extra $500,000. And every player from the winning team will take home $130,000. The losing team still earns $65,000 per player, but that's not nearly as nice.

This game will be important for the owners of each franchise, as well. Sure, owning an NFL franchise is a big deal even if your team barely wins any games. Even the least valuable franchise is still worth about $2 billion. But a Super Bowl title brings prestige, which in turn leads to more fan interest, media coverage, and dollars.

The Bucs and Chiefs are both owned by families that are no strangers to success. Here's how these families have made their fortunes and gotten involved with their respective teams. 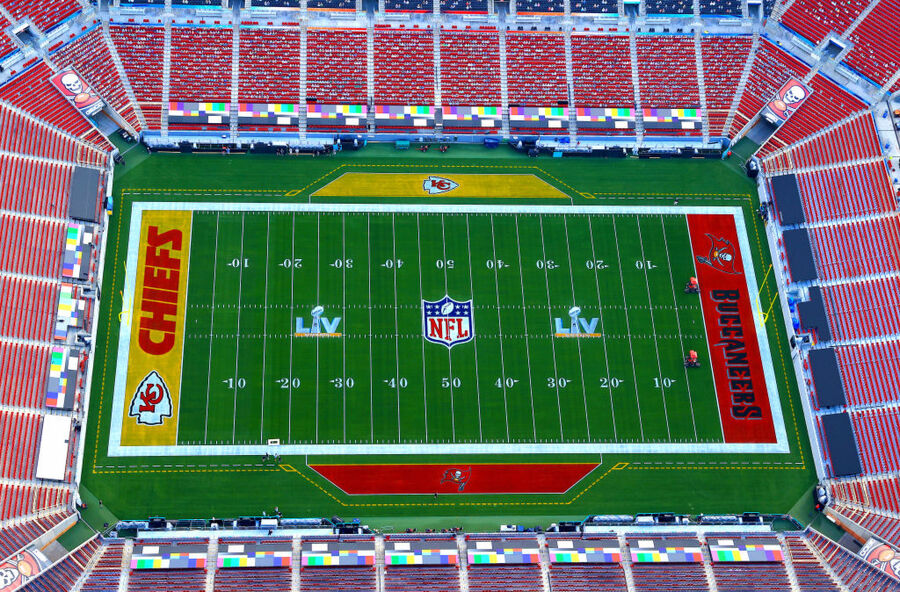 The family that owns the Tampa Bay Buccaneers is fairly reclusive. Joel Glazer made a brief appearance after the team punched its ticket to the Super Bowl, but otherwise, the family typically tries to stay out of the limelight. They certainly have been making impressive moves, however.

Joel's father, Malcolm Glazer, was born in Rochester, one of seven children. He started working his father's watch parts business when he was eight years old. His father died when Malcolm was only 15, and that pushed the teenager fully into the business world. Malcolm began selling watches door to door to support his family.

As he became an adult, Glazer continued working in watches, this time at the Sampson Air Force Base, repairing watches for soldiers and civilians. After the base closed in 1956, Glazer turned toward real estate, investing in single-family homes, duplexes, and commercial buildings. He started locally in Rochester but eventually owned properties throughout America.

After adding health care facilities, television stations, and a bank to his holdings, Glazer founded First Allied Corporation in 1984. He served as president and chief executive officer and invested in numerous companies, including Formica, Harley-Davidson, Tonka Toys, and Zapata Corporation.

Malcolm Glazer bought the Buccaneers in 1995 for a reported $192 million—a league record at the time. The team won the Super Bowl in 2002 but missed the playoffs from 2008 to 2020. In fact, the Buccaneers still have the lowest all-time winning percentage of any team in NFL history.

Yet Glazer's purchase 26 years ago has turned out to be a great investment. Today, the team is worth $2.3 billion. He also worked to make the team more fan-friendly, introducing activities and increasing community relations and events. Malcolm's son Joel Glazer serves as the franchise's representation in all league meetings and most NFL matters, though Malcolm's children all play a part in the franchise.

In addition to the Bucs, the Glazers also own the Manchester United soccer team. Malcolm Glazer gradually acquired ownership of the club by spending more than $1.018 billion to buy out shareholders from 2003 to 2005. The move was viewed as controversial by many Man U fans, but the family still owned 90% of the team when Malcolm Glazer died in 2014.

And much like the Bucs, Man U is enjoying a renaissance this year. The team is currently second in the Premier League standings and a legitimate title contender. It's possible the Glazers get a double dose of championships this year.

Coming off their victory in Super Bowl LIV, the Chiefs will look to make it two in a row with a win in Super Bowl LV. The team's CEO and Chairman, Clark Hunt, leads the Hunt family's ownership group. The family's fortune starts with Clark's grandfather, oil tycoon H.L. Hunt.

H.L. loved to gamble and reportedly turned his final $100 into $100,000 in winnings. He took that money and purchased various properties, which led him to discover the East Texas Oil Field, one of the largest oil deposits in the world.

H.L.'s son (and Clark's dad) Lamar Hunt was a businessman and co-founder of the American Football League. Hunt is also the namesake of the AFC Championship. Lamar founded the Dallas Texans in 1960. In 1963, he had moved the team to Kansas City, changing the name to the Chiefs.

Clark was born just two years after the Chiefs moved to Kansas City (though Clark called Dallas home). After graduating from Southern Methodist University, he worked at Goldman Sachs as an investment banker.

Fun fact: Lamar is the person who coined the term "Super Bowl", which he suggested to the league after seeing his kids playing with a Super Ball. Lamar said the name could probably be improved upon—though clearly, it's had a lasting impact.

He soon followed in his dad's footsteps, and the two worked together up until Lamar's death in 2006. The previous year, Lamar gave Clark control of the Hunt Sports Group. Not a bad 40th birthday present!

Just like the Glazer family, the Hunts have ties to both forms of football. Lamar created Major League Soccer and the North American Soccer League. And because two sports aren't enough, Lamar Hunt co-founded World Championship Tennis, too. The Hunt Sports Group currently owns FC Dallas, and previously had stakes in the Chicago Bulls and Columbus Crew.

In total, the family's entire empire is worth $15.3 billion. The Chiefs account for about $2.5 billion of that portfolio.

Win or lose, these owners won't be hurting for money. But a Super Bowl victory could lead to even more lucrative opportunities down the road. Plus, a championship ring is a nice fashion accessory.