How Much Money Could Dak Prescott's Injury Cost Him?

During the Dallas Cowboys Week 5 win over the New York Giants, Dallas quarterback Dak Prescott suffered a horrific injury. Prescott's compound fracture and dislocation of his right angle will end his season. Prior to the injury, Prescott had been putting up MVP-caliber numbers.

Prescott has gone through a lot since playing at Mississippi State and joining the Cowboys. His mom died from cancer while he was in college. His brother died by suicide earlier this year. And last month, Prescott received some criticism — though thankfully, a lot of support, as well — when he admitted he experienced depression and anxiety.

Knowing all of that, it was especially tough to see Prescott being carted off the field, crying through multiple forms of pain. His timeline for recovery is four to six months.

There's also the matter of Prescott's contract. He doesn't have one after this season, which opens up a lot of questions. 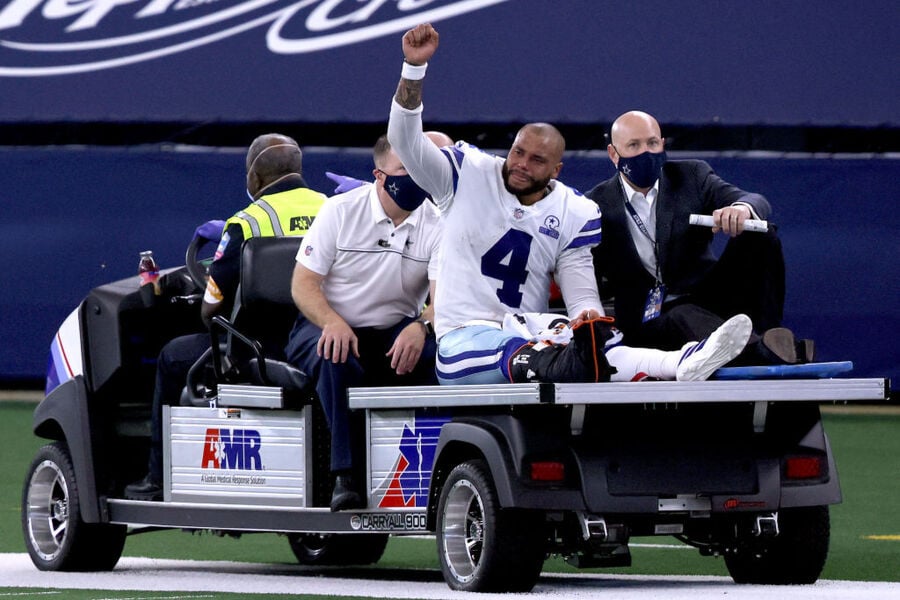 The Cowboys and Prescott tried to come to a deal this past offseason, but couldn't agree on the terms. Dallas offered around $110 million guaranteed, with a $50 signing bonus, over five years. Prescott only wanted four years — likely so he could sign another big contract after this one — and the deal never happened.

Instead, Dallas slapped the franchise tag on Prescott, so he'll make $31.4 million this year. They also restructured contracts of Cowboys teammates Tyron Smith, Zack Martin, and DeMarcus Lawrence, to create about $27 million in cap room that will carry into next year.

The Cowboys have said Prescott is their future and his injury doesn't change things. However, with the COVID-19 pandemic likely decreasing the 2021 salary cap, the Cowboys may very well place the franchise tag on Prescott once more. In that scenario, he'd make $37.7 million in 2021, but still wouldn't have a long-term deal.

A second franchise tag instead of a long-term contract means Prescott would miss out on about $73.3 million in guaranteed money. And he'd be coming back next year as a 28-year-old quarterback playing on a one-year "prove it" deal.

We've seen athletes bet on themselves before and win. Prescott might have to do a similar thing to score a huge pay day. He has a long road to recovery, but as one of the toughest players in the sport, it would be foolish to count him out.