How Much Is LeBron Worth To The Cavs – And The City Of Cleveland?

When LeBron James returned to the Cleveland Cavaliers in the summer of 2014, he had one goal in mind: bring the city a championship. He accomplished that goal in 2016, ending a 52-year championship drought in the city. He came close three other times, leading Cleveland to the NBA Finals in 2015, 2017, and 2018.

It's anyone's guess where LeBron will end up next season. If he does decide to leave Cleveland, the city will take a substantial hit of more than $300 million.

Right now, the Cavs are worth about $1.3 billion, largely thanks to James. He regularly sits atop the most purchased player jerseys; he brings immense talent to the basketball court, helping with attendance numbers; and his presence has been so dominant that Quicken Loans is able to undergo a $140 million renovation project.

This wouldn't be the first time LeBron left the Cavs, but the economic impact this time around would be felt a lot more. When James headed to Miami in 2010, the Cavs' franchise value dropped from $476 million to $355 million in just one season. A similar 25 percent decrease this time around would do nearly three times the damage. 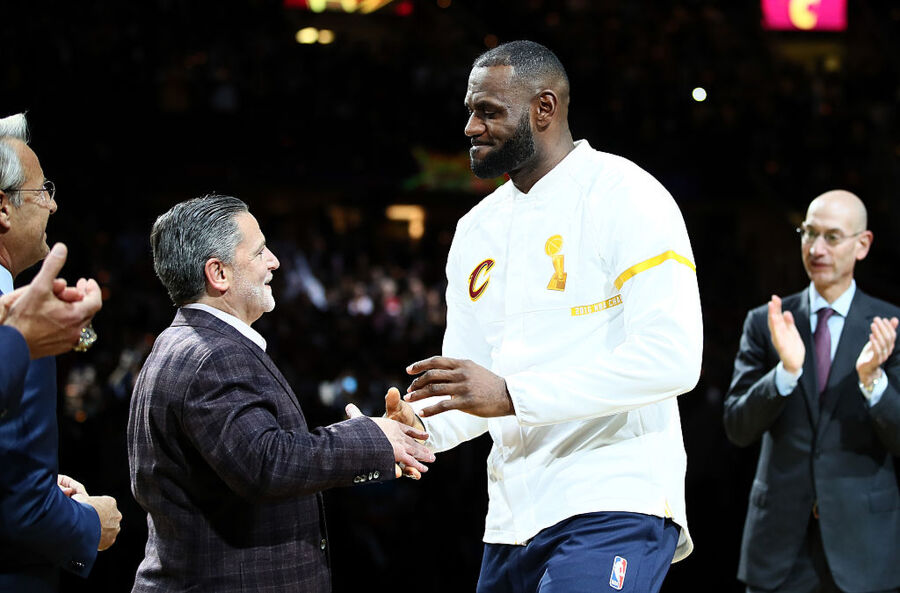 Just take a look at the Cavs' average attendance numbers with LeBron on the roster. The team averaged 20,042 people per game during LeBron's first and second stints, and managed only 17,390 per game during the four years he was in Miami.

Of course, while it's impossible to completely measure LeBron's value to Cleveland, there are a ton of projects that likely don't happen without his involvement in the city.

Cleveland hosted the 2016 Republican National Convention. A $465 million convention center was brainstormed and developed before James left for Miami, finally opening in 2013. And the city has been a top-30 city for booking events over the past two years. It's never even made the top 50 before.

Harvard and Case Western University professor Daniel Shoag developed a research paper looking into the effect of LeBron's presence in both Cleveland and Miami. While with the Heat, there was no noticeable uptick for businesses within a mile radius of American Airlines Arena. In the mile radius of Quicken Loans Arena, 13 percent more business for food and drink establishments, and 24 percent more employment.

However, businesses have to prepare for the very real possibility that LeBron may not be in a Cavs uniform next season. That starts with Cavs owner Dan Gilbert.

From 2019 through 2022, the most valuable seats in his Quicken Loans Arena were sold on a three-year minimum. And if LeBron doesn't re-sign in Cleveland? There's no discount.

Life without LeBron will no doubt have an impact on the city. But both the Cavs and other businesses throughout town have been here before. They're hoping this time around, they're ready to withstand the blow.