How Much Do WWE Wrestlers Make?

No event is bigger for wrestlers than WrestleMania. The 32nd edition hits Arlington, TX in April, and last year brought out all the stops: 20-year WWE veteran Triple H defeated Sting, who's wrestled in three different decades, but never on a WWE stage prior to last year's event. The Undertaker, a name even casual fans have heard, returned to avenge his loss to Brock Lesnar last year, and the former UFC star Lesnar, who just signed a big WWE contract, was the main event, attempting to defend his WWE World Heavyweight Championship.

In the end, Seth Rollins cashed in his "Money in the Bank" contract to join the Lesnar and Roman Reigns match, winning the title in a triple threat match.

WWE claims the average wrestler on its main roster makes $500,000 per year, while some of the big names earn seven figures annually. Rumors abound about how much a certain wrestler makes, though the only one where exact figures exist, is Paul Michael Levesque, better known as Triple H. That's because Levesque is also a WWE executive; he earned $1.1 million for his exec duties plus incentives, and another $1.65 million for his in-ring performances. That amounts to about $2.8 million last year, making Levesque the highest-paid executive, beating Vince McMahon, who made $2.4 million in 2014.

For other wrestlers, they're paid a base salary and then a portion of other sales, like gate receipts and merchandise. Forbes obtained roughly a dozen booking contracts over the years and is able to make a relatively close estimate – it is something like Mike Sanders' three-year contract back in 2001, starting with a base salary of $52,000, while both Brock Lesnar's 2003 contract and Triple H's 2012 deal started with base salaries of $1 million.

Of course, injuries are a part of wrestling, and if a wrestler suffers an in-ring injury that'll keep him or her sidelined for six or more weeks, it can end up being costly, too. Many wrestlers have contracts stipulating that if they miss a house show or TV taping, their base salary will be reduced by 0.5%. For every PPV event missed after that six-week period, the wrestler's base pay will be reduced by an amount equal to the average of the previous three PPV events he or she appeared in. Fortunately, WWE takes care of any rehab and treatment costs, so the blow from a pay cut is softened a bit.

In addition to base salary, a wrestler can earn some extra money from various incentives. For starters, participating in live events certainly helps. Each performer gets a share of gate receipts for house shows. Main event performers will earn more than preliminary or mid-card, though the actual amount varies by venue and event. Talent also receives bonuses for TV tapings and PPV events that aren't directly related to gate sales.

Naturally, specific shares of earnings aren't readily available, so, again, we have to resort to guesswork. A 1991 offer letter from Vince McMahon to the Ultimate Warrior offered a 4 to 5 percent share of house show net earnings, and a payout sheet from the SummerSlam that same year gives a look at how PPV bonuses are structured, or at least were back then.

That SummerSlam payout sheet describes "talent net" as just under $725,000. Hulk Hogan earned the most, with $90,000, or about 12.5% of the total net figure. Other wrestlers took home anywhere between $25,000 and $75,000, or about 3.5 to 10.5 percent of the total. It's safe to assume pay-per-view bonus payouts are similarly structured nowadays, with top performers earning the most money. In that case, John Cena and Randy Orton would be 2014's biggest earners, as they faced off in a title match at the 2014 Royal Rumble, and appeared in at least five other PPV main events throughout the year.

Last year, WWE made $108.5 million at its live events, with an operating income of $27 million. So, the remaining $81.5 million of that total went to wrestlers in some capacity, though it could be anywhere from a few hundred thousand dollars to multiple millions.

Besides base salary and fees for live event appearances, wrestlers can earn money from non-wrestling events and merchandise. In each case, the performer earns a portion of all merchandise and event receipts, with a payout structure that's just as vague as the live events. But again, the biggest names take home the biggest paychecks, a revelation that should be a surprise to nobody. 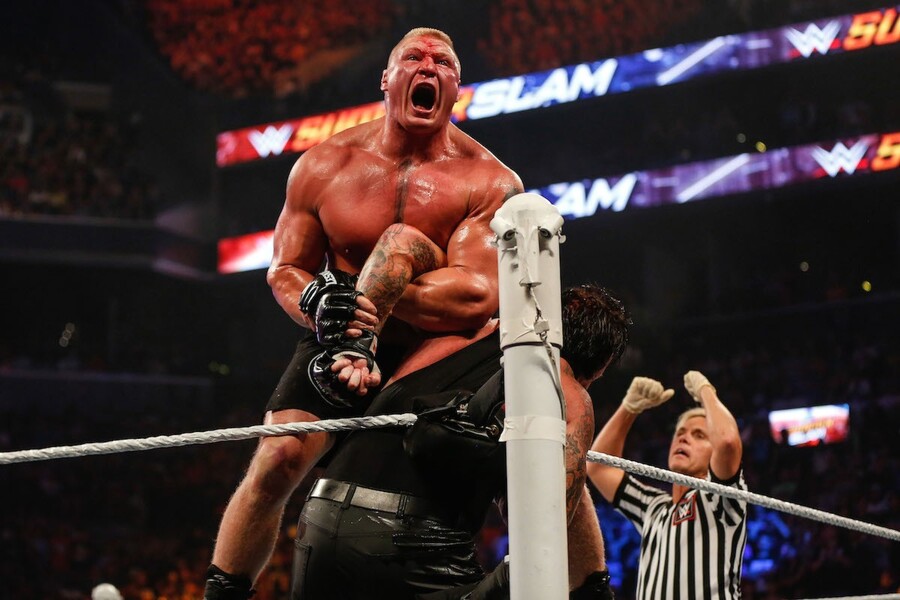 Within the royalties portion of a wrestler's earnings, there are two categories: merchandise and video sales. Merchandise is further broken down into licensing and direct sales. Wrestlers typically receive 25 percent of the net earnings of licensed merchandise that featured only that particular wrestler. If the licensed merchandise includes other wrestlers, that 25 percent is split amongst the entire group. And again, certain wrestlers in the past have earned more than that 25 percent–Brock Lesnar made a 30% share in his 2003 contract, while Jim Hellwig (better known as the Ultimate Warrior) took home a 35% merchandise royalty share, plus a standard licensing rate.

In 2014, WWE made $38.6 million from licensing, while direct sales–licensed products distributed or sold directly by WWE, to which a five percent share goes to wrestlers–netted another $40 million. Of that, nearly $80 million total, a little less than $40 million went to the cost of sales, though it's nearly impossible to tell how much wrestlers made out of that $40 million figure.

Meanwhile, there are certain things that wrestlers must do, that don't pay royalties. Commentary, voice-over work, or any other post-event production is considered work for hire, not an additional royalty. And though they make money for licensed products, wrestlers do not receive royalties for appearing on WWE's website or in its magazine.

They also don't get anything from TV licensing or internet fees, like subscriptions or video-on-demand. That's a big share of revenue performers are missing out on, as the WWE pushes its online-only network platform.

WWE is often secretive about its contracts, but using some of this information from these older contracts gives us a good idea of how much wrestlers make. If nothing else, it should encourage them to keep putting on a great show.