You may have noticed that the Golden State Warriors are in the midst of a record-breaking season. The team has won more games than any other team in NBA history, Steph Curry has made more threes than any other player ever has, and even when it looks like they're about to stumble, the Warriors find a way to win. They're heading towards the playoffs feeling pretty good about themselves.

Of course, they're not the only ones feeling good about their success. Under Armour, which signed Curry to a deal in 2013, is happy anytime Curry and the Warriors win. After all, Steph's success has a direct impact on Under Armour's pockets. Case and point: Last month, a Morgan Stanley analyst estimated that Curry brings as much as $14 billion in value to Under Armour. Let me repeat that. $14 billion.

Reading that $14 billion estimate must be very painful for executives at Steph's former endorsement company, Nike. Especially when you hear the absolutely insane and simple way Nike lost Steph Curry to Under Armour. 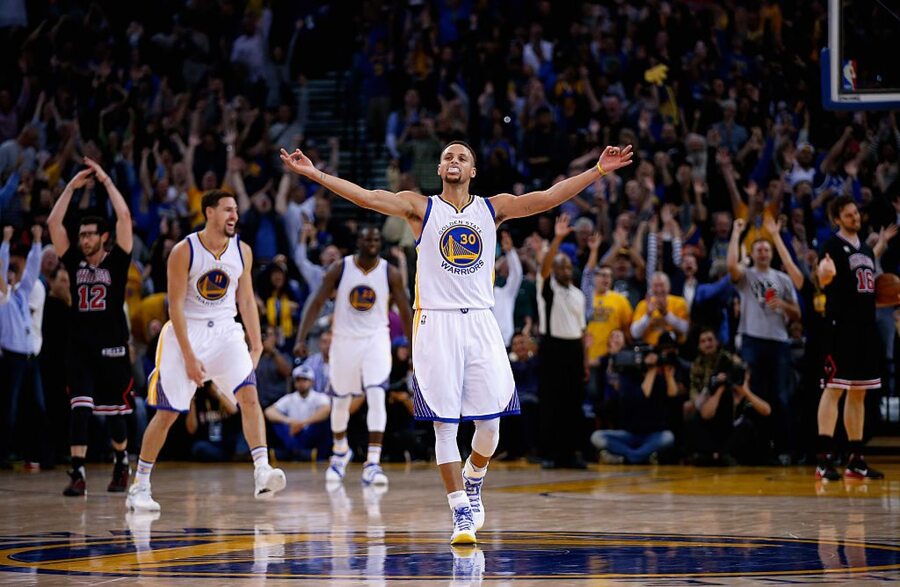 Let's hop back to 2013. The upstart Warriors had just reached the Western Conference semifinals, and Curry, who had experienced injury issues his first few years in the league, played a very durable 78 games. Curry had not only worn Nike shoes since entering the NBA, he also wore them as a kid, as his godfather worked for the company.

Nike had a massive advantage in the shoe department, as well. They've signed 68 percent of NBA players, and more than 74 percent if you include Jordan Brand as part of the company. And 95.5 percent of the consumer basketball sneaker market was claimed by Nike in 2014.

Perhaps because of their enormous clout within the industry, Nike may not have taken their re-negotiations with Curry as seriously as they should have. For starters, they merely sent a marketing director to speak with him, rather than someone with a bit more power… like the CEO. Nike also wasn't sure if they'd let Curry lead a Nike-sponsored camp for up-and-coming players. Curry really wanted to run a camp, mainly because he participated in one led by Chris Paul growing up. The experience helped mold Curry into the person and player he is today.

That summer, both Kyrie Irving and Anthony Davis got camps. Curry didn't.

Things didn't get much better from there. Dell Curry, Steph's dad, was in the meeting and was disappointed that one Nike official kept calling Curry "Steph-on," (like the cool version of Steve Urkel) rather than "Steph-en." Dell was more discouraged by the lack of a correction, rather than the mispronunciation itself. To top it all off, Nike's PowerPoint presentation featured Kevin Durant's name on a slide, indicating they were simply recycling. Dell had had enough by then, and he told his son: "Don't be afraid to try something new."

For Steph, this was the same old song – he had been doubted and underestimated his entire career. He desperately wanted to play for Virginia Tech like his father. V-Tech told Steph that they didn't think he was ready to play in the ACC. So Steph attended Davidson instead and excelled.

Under Armour Makes The Steal

Under Armour can thank undrafted guard Kent Bazemore for its investment in Curry. As a rookie in 2012, Bazemore's agent pitched the idea of having a West Coast guy as part of the UA team. Since the biggest player at the time was Brandon Jennings, Under Armour liked the idea, since it meant getting closer to Curry and Klay Thompson, both of whom had shoe deals soon to expire.

To get the Under Armour name in front of the other Warriors, the company sent Bazemore shoes and gear – lots of shoes and gear. Bazemore estimates they sent "19 boxes in the first shipment" to his apartment, and a total of 60 for the entire season. Players and staff were wearing the free gear, too, and Curry and company took notice.

Bazemore, who was spending late nights in the gym simply to make the league, bonded with Curry, who also would shoot well into the night after the arena lights went dim. The two both grew up in North Carolina, and had similar work ethics. It didn't hurt that Bazemore has a relentless, friendly personality, with a welcoming smile and a fondness of going on 40-mile bicycle rides.

While shooting around, Bazemore was slowly selling Curry on the idea of having his own shoe. He was making promises without actually contacting anyone at Under Armour, telling Curry to picture being the star for a company and being the face of the game, instead of just another rung on the ladder at Nike. 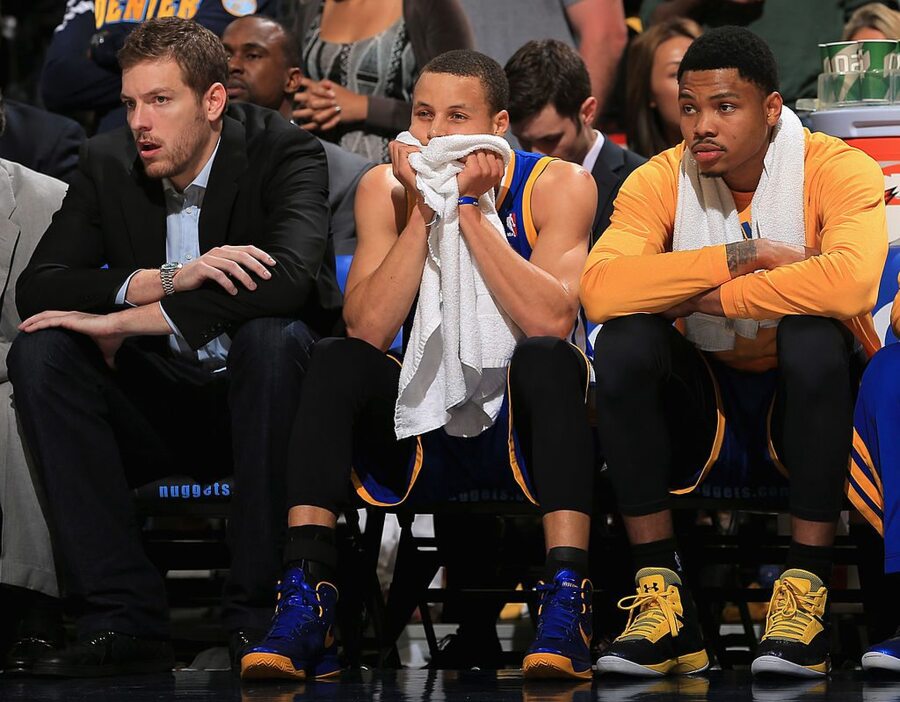 Bazemore wasn't just being used by Under Armour, either. He regularly makes six figures every year after signing a new deal with the company, which came after a season where he only averaged 6.0 points per game. His alma mater, Old Dominion, is now also an Under Armour school, and Bazemore built a new practice facility and granted the largest donation by an athlete in school history.

But signing Steph away from Nike wasn't a slam dunk. Even after all these insults, Nike reserved the right to match any offer Steph received. Under Armour offered $4 million per season, which nearly doubled Nike's offer. The difference was literal pennies for a company like Nike. Why wouldn't they fish around in their couch cushions for a few million measly dollars?

Nike passed. And Steph Curry became an Under Armour man.

Curry signed with Under Armour for any number of reasons, but the one involving his daughter Riley is probably the cutest. When she was just one-year-old, he laid out a Nike shoe, an Adidas shoe, and an Under Armour shoe in front of her, and told her to pick one. She tossed the Nike and Adidas shoes over her shoulder, and brought the Under Armour sneaker, an Anatomix Spawn, right to her dad's hands. "I knew right then," Steph said of the moment.

Nike, much like the rest of the world, didn't see the Curry explosion coming. And Nike's bread and butter had always been with big, athletic wings, like Michael Jordan, Kobe Bryant and LeBron James (who has a lifetime deal with Nike valued at a minimum of $500 million). Long story short, the company had seen a lot of success with players people could only dream of looking and playing like.

Yet that's exactly why Curry has become so popular. Not everyone can relate to dunking so hard that the rim bends or the backboard shakes. But everyone can imagine pulling up 28 feet away from the basket and hitting the game winning shot. We all practice that in our driveways growing up. Counting down the clock in our heads, arcing the ball so high to get over that imaginary defender… we've all been there. Curry isn't the typical Nike athlete, but he's the typical human, and that's made him both relatable and extremely popular.

And Curry has an extreme loyalty to Under Armour, much like LeBron does with Nike and Jordan does with his own Jordan Brand. After all, the company is paying all of them more than their respective teams did, have, or ever will. Both LeBron and Curry will keep receiving checks from shoe companies after they're retired; Jordan left the game more than a decade ago and still makes $80 million per year from his shoes.

In September 2015, Steph extended his Under Armour deal through 2024. His extension reportedly increased his annual shoe deal to $10 million. It also came with a sizable equity stake in Under Armour, something Nike never dreamed of offering.

So what's the lesson here? There are a few. #1) Believe in yourself. If you think you're worth more than what someone is offering, go out and get more from someone else. #2) Don't bet against the underdog (that applies to Steph Curry and Under Armour). #3) Steph Curry is probably not human, and that helps if you want to succeed in professional sports.