Every family experiences a little bit of tension. Think about yours—maybe you and your parents don't always see eye to eye on things. Or perhaps you've got an aunt or uncle that posts a little too regularly on Facebook.

Those disagreements may lead to some awkward moments, but chances are they've never snowballed into a massive family feud.

For two families back in the 1920s, though? A major disagreement led not only to a massive family feud, but to the creation of two separate multi-billion-dollar companies. 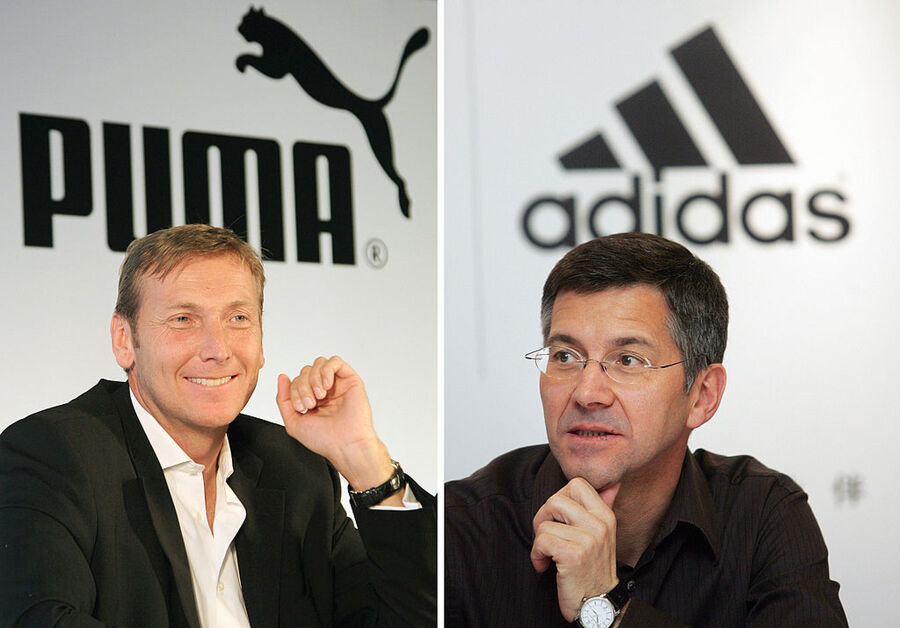 A Shoe Empire Is Born In A Laundry Room

In 1924, brothers Adolf ("Adi") and Rudolf ("Rudi") Dassler started a shoe company in their mother's laundry room. They named their show company Gebrüder Dassler, Sportschuhfabrik. Which just rolls off the tongue and is German for "Dassler Brothers Sports Shoe Factory".

The pair worked well together. Adi crafted the shoes, and the more charismatic Rudi sold them.

Over time the shoes began selling very well in Germany. Then Adi created something that would propel the company to international fame: spikes that screwed into the bottom of the shoe.

The brothers befriended a German track and field coach named Josef Waitzer, who started giving them access to German athletes.

In 1936, the brothers headed to the Summer Olympics in Berlin. Adi approached several athletes, including American sprinter Jesse Owens, with a suitcase full of those spiked shoes. He convinced all of those athletes to compete with them. Owens won four gold medals in the 1936 Olympics in Dassler shoes. Athletes wearing Dassler shoes won a total of seven golds, five silvers, and one bronze medal.

After the Olympics, the duo were selling nearly 200,000 pairs a year. They looked poised for enormous success until World War II.

During the war, several factories were limited or shut down entirely as many workers were being drafted to serve in the military. As he grew more power-hungry, Rudolf sought control of the company. He denied employment to his sister Marie's sons; both ended up going into the military and were killed during the war. Rudolf's decision started building up tension, as both men's wives also began feuding with each other.

Adi was drafted in 1940 but was soon able to return home, with the Dassler Brothers Sports Shoe Factory listed as an essential business during the war. At one point in 1943, Adi and his family took refuge in a bomb shelter. Rudolf and his family were already inside the shelter. Adi, likely commenting about the Allied war planes above them, said, "Here are the bloody bastards again." Rudolf thought his brother was talking about him and his family, and that led to additional insecurity between the two.

Rudolf was drafted later that year and thought Adi was the one who sent him off. He attempted to escape but was arrested by the Gestapo. While in detention, his rage continued to grow as his brother controlled the business.

After the war, Rudolf was detained by American soldiers, who were still trying to identify people that had supported the Nazi party. Rudolf believed Adi set him up for this, as well, despite having no real evidence to support the claim. Adi was also classified as a "belasteter" (someone who was incriminated of a crime), related to the payment of taxes. This designation put him up for potential jail time. Rudolf took this opportunity to try and regain control of the company, devising a scheme to make him look innocent while implicating his brother, but ultimately failed to do so.

By 1948, tensions were so high that the brothers decided to split the company in two. All assets and employees were divided, with one brother on either side of the Aurach River. Those negotiations were the last time the brothers ever spoke to each other.

Adi kept the Dassler shoe factory and two-thirds of its employees. Rudolf headed south of the river to set up his new company. Both looked to change their company names and start fresh.

For Adi, the name came naturally. "Adidas" was a combination of his first and last names: Adolf and Dassler.

Rudolf tried to do the same, but "Ruda" didn't have as nice a ring to it. Instead, Rudolf chose Puma as his new company name, as he felt it still sounded athletic and intimidating.

The rivalry extended beyond the brothers. Their hometown of Herzogenaurach became "the town of bent necks," since the first thing everyone did when meeting someone was to look at what shoes they were wearing. You were either an Adidas or a Puma supporter, and the rivalry encompassed all aspects of life, from businesses to dating. A marriage between a Puma and Adidas family would be on par with mingling between the Capulets and the Montagues from Romeo and Juliet. The two sides simply did not mix.

Rudolf and Adi died in 1974 and 1978, respectively, leaving each of their companies to their sons. The sons kept up the feud and even asked to be buried as far away as possible from each other in the same cemetery.

However, by 2009, the two sides had started to reconcile, participating in a soccer match against each other to bury the hatchet once and for all. Today, they're both celebrated in the same town, though you still may find an occasional butcher or barber that won't allow customers to wear the other brand in their shop.

They're also both still selling plenty of merchandise. Adidas generated $22.7 billion in revenue in 2021. The company has strong sponsorship deals with players like Aaron Rodgers and Alvin Kamara and produces kits for multiple soccer leagues. The company also has shoe lines with non-athletes. Its "Yeezy" line with Kanye West generates billions in revenue.