The "Holy Grail" Of Baseball Cards Is Up For Sale, And Could Go For A Record Amount!

The "Holy Grail" of baseball card collecting (a name coined when the card first went to auction in 1974) is officially up for sale! If you follow card collecting at all, you'll know exactly what card I'm talking about.

So what makes this card so special? Oh so many factors.

#1 – There were only about 200 printed, and only about 50 of them are known to exist at this time. Most of those are in very poor condition. Wagner reportedly asked that the company stop printing these cards with him on them, as they had advertisements for the American Tobacco Company on the back and were sold in cigarette packs. According to Ken Goldin of Goldin Auctions, the host of this card's latest auction, "On the back of the card was a big ad that said 'tobacco.' He didn't want to promote tobacco." 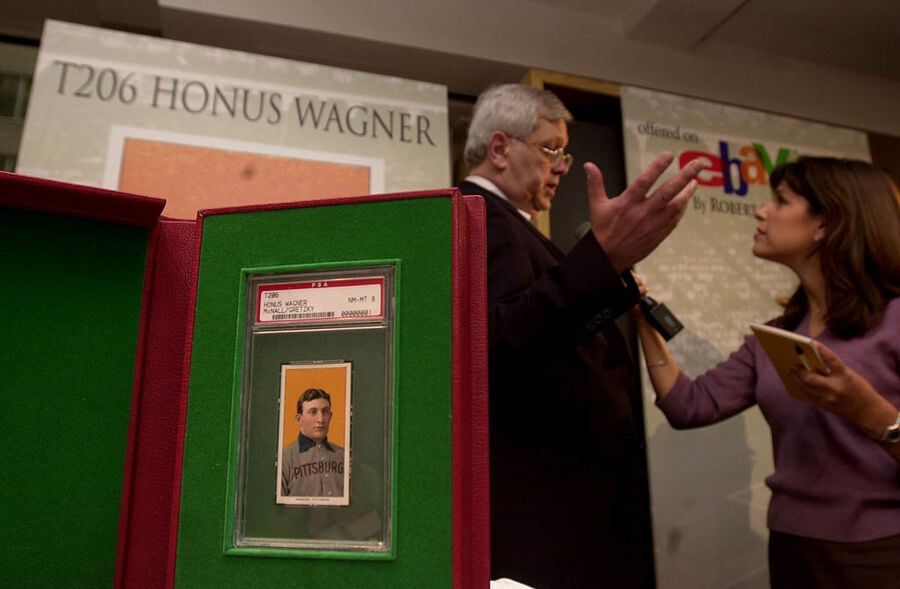 #2 – This card in particular rates a 5 on the 10-point PSA scale. For a card of this age, a 5 is about as good as you can get. This is known to be one of the two best versions of this particular card still in existence.

#3 – It's called "Jumbo" because it was originally cut larger than all the others in the series. At this time, the cards would have been cut by hand. This human error has added to the appeal of this T206 Wagner.

#4 – The origins of this card can be traced all the way back to its original purchase, which is an extreme rarity for a card of this age. It belonged to a single family all the way until 1974, and has only changed hands a handful of times since then.

#5 – Finally, when you combine all of these elements with the age of the card and the caliber of the player on the card, it becomes the most valuable baseball card in existence. Honus Wagner is widely recognized as the best shortstop of all time, and this 100+ year old card will fetch a fortune.

In fact, the starting bid for the auction, which ends on October 1, was $1 million. Ken Goldin believes that the card will go for about $5 million, which would make it the single most expensive piece of sports memorabilia in history!

There's no way I could describe the card as beautifully as the Goldin Auctions website:

"This is the artifact that continues to be the ultimate goal of every enthusiast, and which singlehandedly acts as a figurehead for our hobby in the estimation of the masses. Honus Wagner's presence elevates any collection like no other force on the planet, but so lamentably few of the avocation's finest assemblies have the opportunity to attain the resultant, ultra-elite status thus afforded. This special card, with faint signs of natural handling and admiration displayed proudly and its unique manners of character and size showcased boldly, represents the cherished essence of the innumerable, rewarding lifetimes spent in pursuit of collecting fulfillment."