Here's Why So Many NBA Players Don't Have Shoe Deals

When Michael Jordan first launched his Air Jordans, sneaker culture suddenly became a global interest. It was cool to wear the same shoes your favorite player did, and it seemed like every player had their own signature line. The sneaker game in the NBA showed no signs of slowing down.

Nearly four decades later, Air Jordans are still the best-selling shoes in the world. But not everything is the same — in fact, the number of players with shoe deals is dwindling.

The Undefeated did a deep dive into the changing landscape of NBA shoe deals and made some fascinating discoveries. Here are a few of the highlights.

There are 450 players in the league. A few years ago, they all would have had some form of a shoe deal, even if it was a modest one. Today, there's a bit of a hierarchy among players.

Out of those 450, only 18 have signature shoe deals. They receive a huge base salary, plus royalties on their shoe sales. This group includes players like LeBron James, Steph Curry, Kevin Durant, James Harden, and Kyrie Irving. They all earn more than $10 million per year, with a 5% royalty (or even higher in foreign countries) on the sale of each shoe or branded apparel item.

These players can also score different bonuses for on-court performance or off-court initiatives. Making the All-Star Game or All-NBA teams, winning league MVP, and advancing in the playoffs can all add a nice chunk of change to these deals. Some players also negotiate for money toward their nonprofit, or to sponsor programs or donate gear to a school. In total, a signature shoe deal can often reach $20 million or more every year.

For these 18 players, the signature shoe deal is a lucrative opportunity. But what about the other 96 percent of the league? 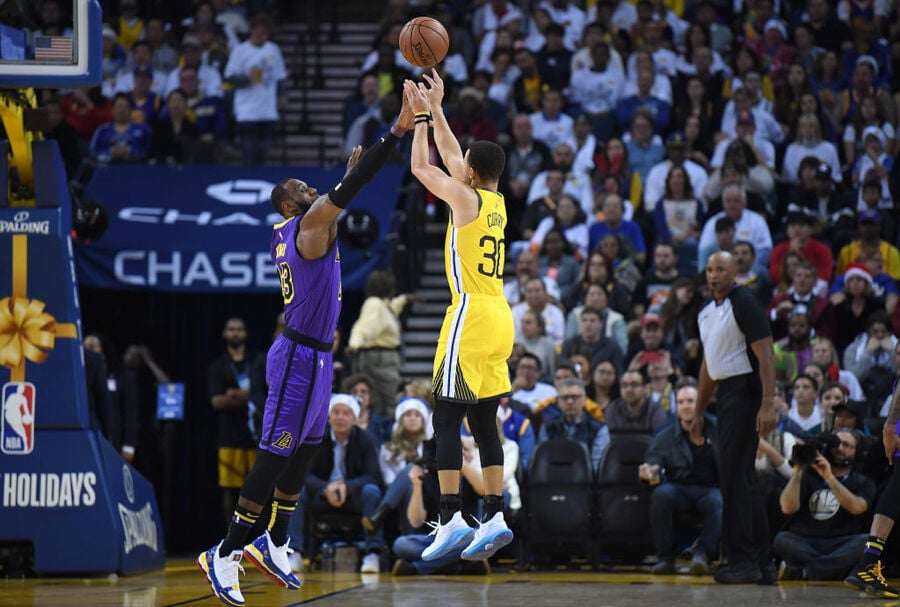 About 225 players have cash deals, ranging from $50,000 to $4 million. This tier includes guys like Anthony Davis (Nike), Jayson Tatum (Jordan Brand), and Kristaps Porzingis (Adidas). While they don't have their own signature shoe, they can provide input into shoe designs, such as a unique colorway. Companies prefer the bulk of these deals to go to guards in larger markets, since they're playing more nationally televised games and often have the ball in their hands more frequently.

The final type of deal is the one that's been hit the hardest during the pandemic. Merch deals typically involve a player receiving a set amount of credit to use in purchasing shoes or other merchandise. Typically, that credit is about $15,000 to $25,000, but it can only be used to buy company product. No cash changes hands, and outside of the essentially free products, there aren't any other incentives. These deals are often year-to-year and don't roll over. Players with leftover credit often have to buy in bulk toward the end of the agreement.

On his podcast, NBA writer Ric Bucher said that about 150 players have a paid shoe deal of some kind — and about half are expiring and won't be renewed. That leads players to bounce around companies on a game-by-game basis. One game, a non-superstar player may rock a pair of Adidas, only to wear Nike the next game and Under Armour the following night. At least 100 players won't have a shoe deal this season, and that number could creep as high as 175 — or nearly 39 percent of the entire league.

Rookies are no longer a sure bet

In the past, companies would offer most first-round draft picks a deal. Much like a stock portfolio, they believed that even if two or three picks missed the mark, having one reach All-Star level — even a mid-round pick like Donovan Mitchell, Giannis Antetokounmpo, or Kawhi Leonard — would more than make up for it.

That approach has changed. After a few seasons of being burned, shoe companies are now generally content to wait and see who pans out before offering a deal. They may still end up signing a player that fizzles out after only a few seasons, but they'd rather make sure he has some on-court success first. To use another stock market analogy: if you invested in Google in 2007 after they had some initial success, instead of when they first went public in 2004, you're probably not kicking yourself too much. Shoe companies are taking a similar strategy.

This season, LaMelo Ball was the only player from the 2020 NBA Draft class to receive a shoe deal. He signed a multi-year contract with Puma worth $100 million. Ball has already become the youngest player to ever record a triple-double, and thanks in part to his father Lavar and brother Lonzo, he's already part of an established, recognized family. We all remember when Big Baller Brand burst onto the scene, right?

Compare that to 2019. R.J. Hampton, the 24th pick in the NBA Draft, who received a multi-year deal from Li-Ning worth millions. Those types of deals simply aren't there for this draft class, including the top two picks, Anthony Edwards and James Wiseman.

There will always be a place for retro sales in any business. Record players and turntables still have interested buyers. Classic video game titles can be introduced to new generations — the recent remastering of the first two Tony Hawk Pro Skater games being a prime example. Basketball fans will shell out money for a retro Jordan or Kobe shoe.

Signature shoes won't go away, but as we start another year, the landscape is certainly changing. The next time you tune in to watch your favorite player take the court, pay attention to his kicks. They could be earning him millions — or nothing at all.