Here's Why No One Wants To Sign Colin Kaepernick

NFL free agency is well underway and teams are picking up key pieces to help themselves for the upcoming season. We've seen many players switch teams, but there's one quarterback who can't seem to find a new home: Colin Kaepernick.

Kaepernick was set to make $16.5 million this year but opted out of the final year of his contract with the San Francisco 49ers. The team later said they were planning to release him anyway. And now Kaepernick is in this sort of limbo, with no team jumping at the chance to sign him. 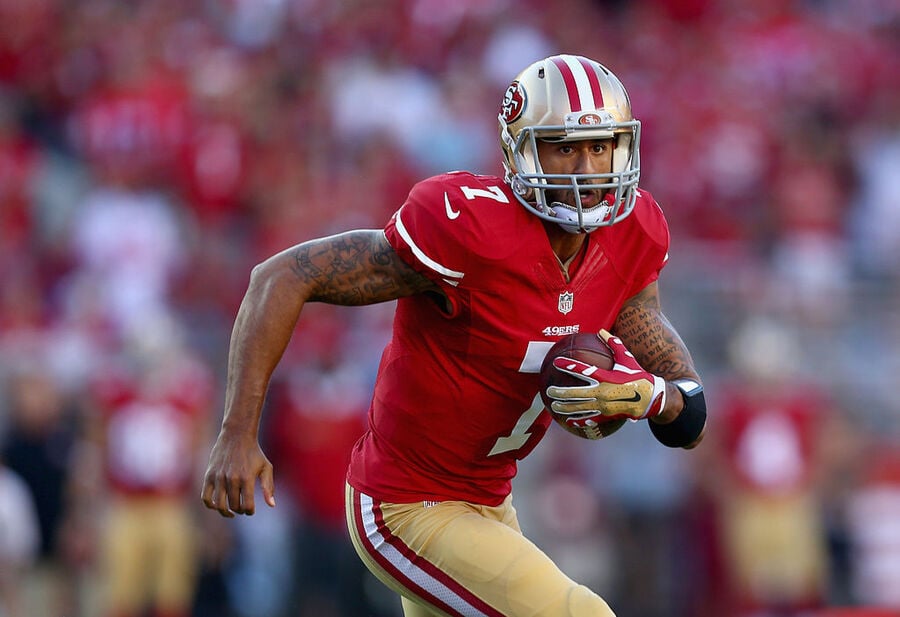 According to reports from around the NFL, teams are low on Kaepernick for two reasons: they don't want to deal with the additional drama he brings – some teams still disagree with his kneeling during the National Anthem – while others believe he simply can't play anymore. Said one AFC GM:

"First, some teams genuinely believe that he can't play. They think he's shot. I'd put that number around 20 percent.

"Second, some teams fear the backlash from fans after getting him. They think there might be protests or [President Donald] Trump will tweet about the team. I'd say that number is around 10 percent. Then there's another 10 percent that has a mix of those feelings.

"Third, the rest genuinely hate him and can't stand what he did [kneeling for the national anthem]. They want nothing to do with him. They won't move on. They think showing no interest is a form of punishment. I think some teams also want to use Kaepernick as a cautionary tale to stop other players in the future from doing what he did."

During this past season, the Niners and Kaepernick restructured his contract so he could opt out and become a free agent. But so far, the market just hasn't been there for him. Director Spike Lee believes that's "fishy," posting on Instagram that he can't believe one of 32 teams wouldn't take a chance on him.

Just Had Brunch With My Brother Colin @Kaepernick7 . How Is It That There Are 32 NFL Teams And Kap Is Still A Free Agent? WTF. Smells MAD Fishy To Me,Stinks To The High Heavens. The New York J-E-T-S Need A Quarterback. Who Is The J-E-T-S Quarterback? Is My Man Joe Willie Namath Coming Back? Crazy Times We Live In. The Question Remains What Owner And GM Is Going To Step Up And Sign Colin So Their Team Has A Better Chance To WIN? What Crime Has Colin Committed? Look At The QB's Of All 32 Teams. This Is Some Straight Up Shenanigans,Subterfuge, Skullduggery And BS. Ya-Dig? Sho-Nuff. By Any Means Necessary. And Dat's Da NoFunLeague Truth,Ruth.

Kaepernick went 3-16 as a starter his last two seasons in San Francisco. Of course, some of that is the putrid team he had surrounding him – the Niners' offensive line, receiving corps and defense were all among the worst in the league. He did throw for 16 touchdowns and just four interceptions last season, but completed fewer than 60 percent of his passes and fumbled nine times in 11 starts.

Even Donald Trump, who previously has called Kaepernick "disrespectful" for kneeling to protest racial injustices, took a shot at the former Niners quarterback.

"There was an article today … that NFL owners don't want to pick him up because they don't want to get a nasty tweet from Donald Trump," the president said at a rally in Kentucky. "Do you believe that? I said, 'If I remember that one, I'm gonna report it to the people of Kentucky because they like it when people actually stand for the American flag.'"

As part of Kaepernick's protests, he's pledged $1 million to a variety of charities and causes. Thus far, he's donated $500,000, with the most recent donations going to Meals on Wheels and Love Army for Somalia.

While some teams will certainly avoid picking up Kaepernick because of his past off-the-field moves, it's hard to believe every team has a better option at quarterback. Kaepernick even had a better QB rating than established veterans like Alex Smith, Joe Flacco, Philip Rivers, Cam Newton, and Eli Manning. Perhaps in the right system, he could return to a form near his peak in 2012 and 2013, which included a trip to the Super Bowl.

Other teams might be waiting until Tony Romo finds a new home or decides to stay with Dallas before looking at alternative quarterback options. But if Mike Glennon, who hasn't started a game since 2014, can get a three-year, $44 million deal, you'd think Kaepernick could at least receive a similar offer. For now, though, he'll just have to continue to wait for a call.

And if he does sign on with a new team, he's said he'll stand for the anthem next season.