Carson Wentz signed a massive four-year, $128 million deal before the 2019 season. At the time, the deal was defensible. Wentz had played well the previous two seasons, with a total of 54 touchdowns and 14 interceptions. He led the Eagles to an 11-2 record in 2017 before getting hurt; Nick Foles replaced him and led the team to a Super Bowl victory. The following season, the Eagles started off only 5-6, but Wentz was putting up solid numbers before he again got hurt.

For the first year of his new deal, Wentz delivered. He led the injury-riddled Eagles to an improbable NFC East title, setting new career-highs in completions, pass attempts, and yards.

In 2020, though, Wentz has regressed. The Eagles are still injury-riddled, but Wentz doesn't look as sharp in either his reads or progressions. As a result, he led the league in interceptions thrown (15), turnovers (19), and sacks taken (50) in only 12 games.

With Wentz struggling, the team turned to backup Jalen Hurts. Hurts played quarterback in college, but initially entered the league as a wide receiver. However, he gave the Eagles a boost offensively, throwing for 338 yards and three touchdowns.

It looks like the team is going to keep Hurts as the starter. Wentz has already expressed his displeasure with sitting on the bench, which means the Eagles may look to move him. If they do, they would owe him a ton of money. 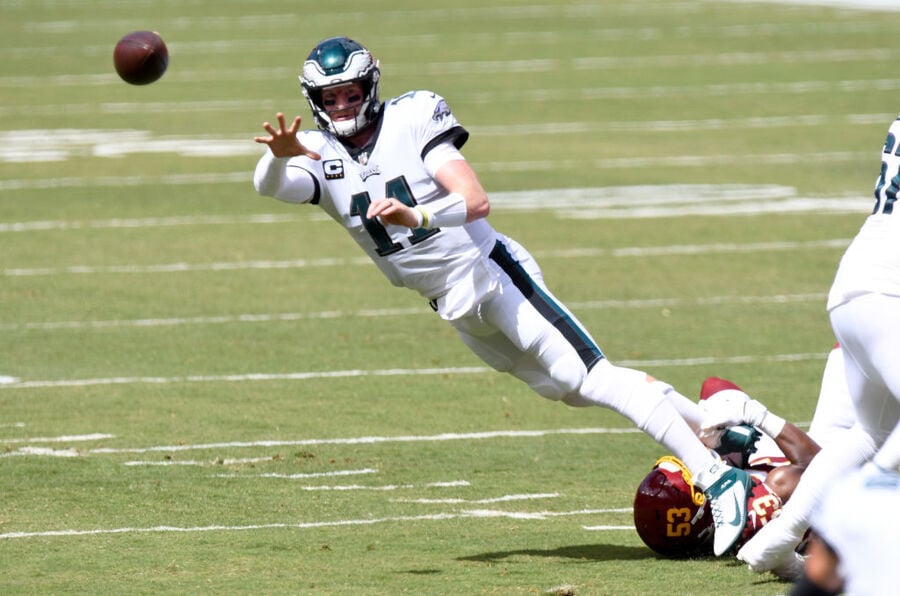 Wentz was paid $66.47 million of his contract at signing and has $107.97 million guaranteed throughout the contract's duration. He's only making $1.383 million in base salary this year, but he's owed $15.4 million in 2021 and at least $20 million every year after that. And his cap hit and dead cap money numbers are staggering.

The Eagles may be best served to keep Wentz under contract for one more season and look to move him in 2022. If they release him before June 1, 2022, the Eagles would spend more than $24.5 million in dead money but save about $6.72 million in cap space. However, if they wait until after June 1, the cap savings would be $22 million – equal to Wentz's base salary for the 2022 season.

The dead money number drops further in 2023 and 2024, so the Eagles could wait until then to release Wentz. If the team doesn't plan on starting him, though, it makes little sense to hang onto him. They should at least try to get something of value back for Wentz, a player the team traded up twice to grab at No. 2 in the 2016 draft.

And who knows? Maybe Wentz becomes the starter again in 2021 and both the player and team can put this situation behind them. But a more likely scenario is that Wentz wants a change of scenery, and the Eagles will have to pay for him to play elsewhere.