How Much Is Winning The Heisman Trophy Worth To The Player?

Saturday night, the latest college football player was anointed as the best in the land, as the most recent winner of the Heisman trophy. Derrick Henry became the second player from Alabama to win the award and the first running back since Mark Ingram became the first Alabama player to win back in 2009.

The trophy will not likely have an effect on where he goes in the draft. He is expected to be the second running back taken behind Ezekiel Elliot (assuming both do declare for the draft), and is slated by CBS Sports to be picked late in the first round or early in the second. 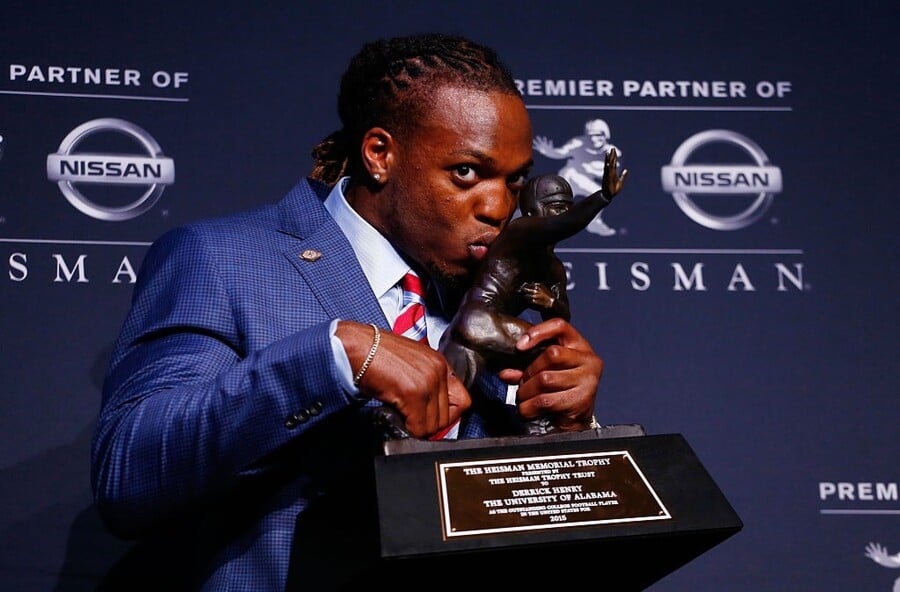 Should that be the case, he will likely make anywhere from $8.5 million (pick No. 28) to $5.6 million (pick No. 40). So he will not exactly be hurting for money, but thanks to his Heisman trophy he will have the opportunity to make as much as $400,000 before he even steps foot on an NFL practice field, and even more after he does (which has proven useful to several past winners who flamed out in the NFL).

Apparel companies like to sign the popular players before someone else does, but they will not sign just anyone before they play a down in the NFL. If Nike, Adidas, or Under Armour are going to pay up before a player earns his due in the NFL he needs to have some established celebrity power.

Being a Heisman trophy winner certainly gives a player that. It helped Tim Tebow sign a $300,000/year deal with Nike even though he was not projected to do well in the NFL. Reggie Bush (Adidas), Cam Newton (Under Armour), and Johnny Manziel (Nike) also got pretty nice deals from their respective companies right out of the gate. In general, according to marketers, the Heisman can add up to $100,000 a year over the course of a four-year deal.

As a Heisman winner, the demand for your autograph goes up quite a bit the second you pick the trophy up (just ask Johnny Manziel about that). Even if you don't work out in the NFL, the value of your signature will maintain longer than other college players, simply due to winning the Heisman. Over time, this could add up to more than a $200,000 bump.

As a celebrity, Heisman trophy winners get asked to make appearances and give speeches all the time, and often long after their playing days are done, making them as much as an additional $200,000 over the years (if not more).

This, of course, is only true if you are comfortable with making appearances and giving speeches, but even if you are not, it can still help. Eric Crouch won the Heisman in 2001 and saw his NFL career go down in flames rather quickly, but being a former Heisman trophy winner has been good for business in Omaha and has kept him in demand for public appearances (although living in the state where he played college football probably helps).

In the week leading up to the announcement of the winner, LSU running back Leonard Fournette was asked repeatedly about being left off the list of finalists. He acted like he was okay with it, and mentioned how winning the Heisman doesn't always equate to success in the NFL.

He's right. Since 2000, six winners are already out of the league, and the book is still out on six others (Sam Bradford, Mark Ingram, Robert Griffin III, Johnny Manziel, Jameis Winston, and Marcus Marriotta). Only Cam Newton and Carson Palmer have achieved elite status.

However, while Chris Weinke, Eric Crouch, Jason White, and Matt Leinart may be out of the league their future earning potential is a lot higher thanks to the Heisman. So don't be so nonchalant about it Fournette. There is no guarantee you'll make it in the NFL either.