The Bay Area is known as a hotbed of innovative giants, so perhaps it's only fitting that the Golden State Warriors are jumping onboard the tech rain.

The Warriors signed an advertising badge deal with the Japanese tech company Rakuten, whose North American headquarters is in San Francisco. The deal is worth $20 million per year over three seasons. That's about twice as much as the second-highest deal, signed by the Cleveland Cavaliers.

What a surprise – even in advertising space, the Warriors and Cavs are duking it out for supremacy.

The Warriors will wear a patch (or a badge, as they're calling it) featuring Rakuten's red and black logo on their home white jerseys and a white version of the logo on their road blue uniforms.

One of the most popular companies in Japan, Rakuten owns cash-back site Ebates, messaging app Viper, and Kobo, a brand that distributes e-books. Factoring in TV, social media, video games, and jersey sales, the company's logo is expected to generate about $32 to $37 million in equivalent advertising this upcoming season. 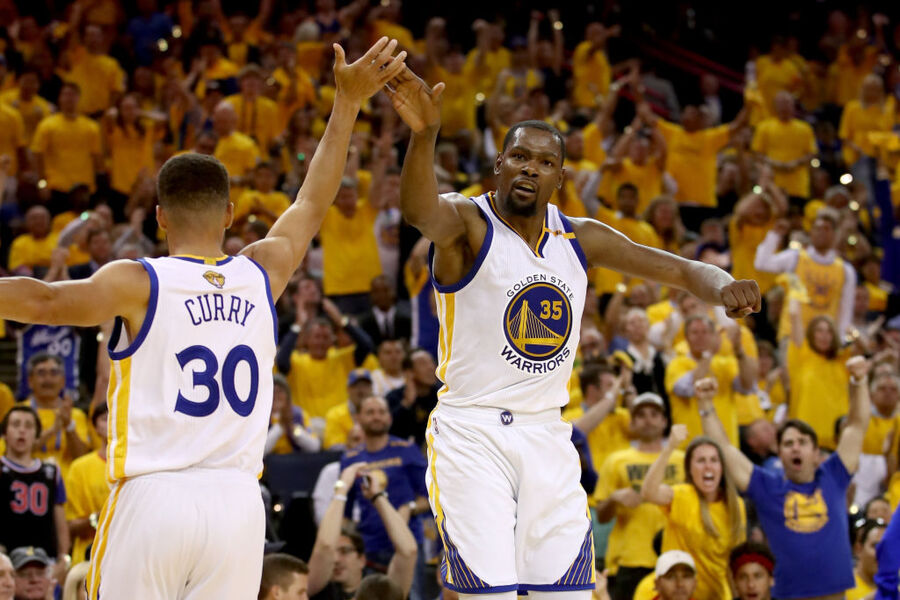 Rakuten partnered with FC Barcelona in July and now appears on the club's kit. That deal is a bit more expensive: $262 million over four years. In addition to these partnerships, the company owns a pro soccer team in Kobe, Japan, and baseball team, the Tohoku Rakuten Golden Eagles.

On top of the badge deal with the Warriors, Rakuten gets naming rights to the team's practice facility, as well as a handful of other perks that will last longer than three years. The company will serve as the team's official e-commerce, video-on-demand, and affiliate marketing partner.

Warriors chief marketing officer Chip Bowers said the deal was not the largest offer the team received, but that it was important to partner with a global brand.

Rakuten founder and CEO Hiroshi Mikitani, meanwhile, is excited about the exposure the brand will get in North America with stars like Steph Curry and Kevin Durant rocking his logo. His company brought in $7 billion in revenue in 2016 but isn't as well known in the United States. In an interview, Mikitani said the goal for Rakuten is to become a household name like Facebook or Google.

It's the biggest patch partnership yet. So far, 14 NBA teams have done advertising deals. How many additional squads will join them before the season tips off in about a month?