There are few things in life that are better than your favorite team starting off the college football season with a win. Your hated rival could lose. You could get your pizza for free because the delivery guy was late. Your buddy that likes to yell at the television after every play will drink too much and pass out early. The list could go on and on, but the best thing that could happen, other than a win on opening weekend, is winning money from that win (or your hated rival's loss). Since the betting lines for some games can be a little crazy, you can win money even when your team loses. How's that for awesome? You can win even when you lose (God bless America)! 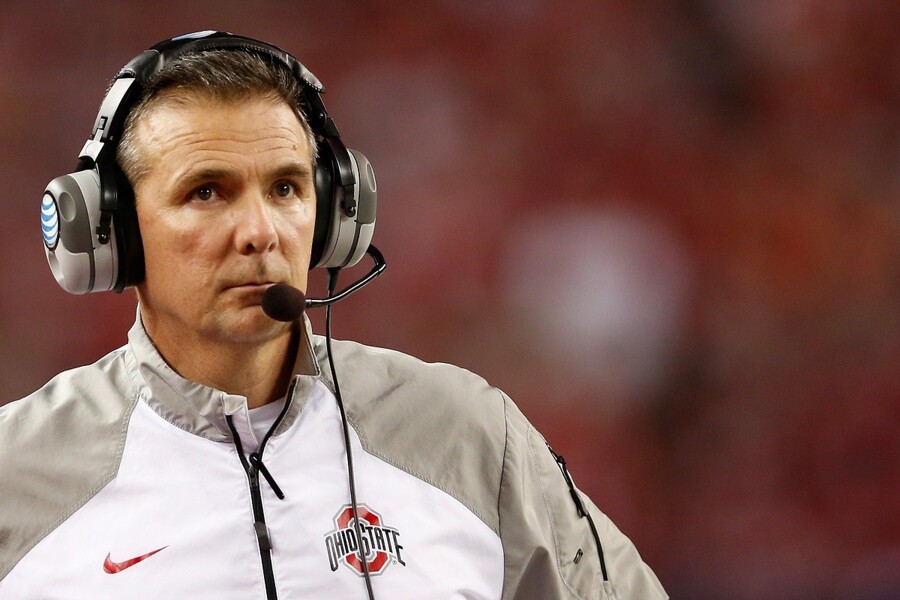 There is only one game between ranked opponents, but there are several games that should be interesting and a number of really big spreads.

Will Michigan rise again? Who will play quarterback for Ohio State? Will TCU and Baylor remain on top of the Big 12? By Tuesday morning those questions and more should be answered!

The world is anxiously awaiting the return of the man in khakis to the college football sideline. Will Jim Harbaugh return the once proud Wolverines to glory? He certainly has fans hopeful again, but whether he has the talent to do it this season remains to be seen.

The Horned Frogs are going to be without two defenders, but head coach Gary Patterson has not let it spill which two. Trevone Boykin's Heisman bid could get off to a fast start against the Golden Gophers defense who may end up on the field a lot if the new offensive play makers can't step up.

This is one of those games that should never be scheduled. No team should ever be a 31 point favorite over another. It is not a matter of whether this game is going to be bad, but a matter of how bad. If Arizona doesn't cover the spread they deserve to lose.

Connor Cook and the Spartans were one of the better offenses in college football last season, and there is little reason to think they will not be this season. The trick will be to see how the defense does now that former defensive coordinator Pat Narduzzi is heading up the Pitt program.

This one may be close at the half, but the Spartans should run away with it in the second half.

The Bears have been one of the most exciting teams in college football for the last few years. Baylor lost some offensive talent to the draft last season, but they replaced it with some guys that could be even better. Whether they cover the spread is not in question, but rather how many quarters it will take to do so.

The Razorbacks started looking like real competitors last season. Brett Bielema has managed to construct one of the best offensive lines in college football, and has some pretty good running backs chomping at the bit to run behind it.

It has been a long time since Arkansas has started a season ranked, and there is little chance that UTEP brings them back down to Earth.

The Sooners have not been the powerhouse that they once were, giving some reason to believe that maybe it is time to move on from Bob Stoops. Once they see the team play with new quarterback Baker Mayfield under center that should all change. Mayfield exploded onto the college scene a couple years ago at Texas Tech, but had a falling out with Kliff Kingsbury and transferred to Oklahoma.

After sitting out for a season he is ready to prove the Red Raiders shouldn't have let him go. Akron doesn't really belong on the same field with the Sooners so he may not prove much this week, but at least he'll be fun to watch.

This game is unique in that the ranked team is actually the underdog. Kyle Allen will lead the offense into the end zone, but the real question is whether the Aggies defenses (which has been one of the worst in college the last couple years) will be better under Chavis. If the defense does improve the Aggies will likely find themselves in the top 25 next week.

Charlie Strong is looking to get the season started with a bang by taking down a very good Notre Dame team. Can he do it? Probably not. The Longhorns defense is good enough to cause some trouble for new Notre Dame quarterback Malik Zaire, but the real question will be whether the Longhorns offense will do anything.

Chances are—probably not. Tyron Swoopes does not have what it takes to beat a defense as good as Notre Dame's.

Florida beats out Baylor for the ridiculous spread of the week, and if there is one team that may have trouble covering a spread this week it is the Gators. Treon Harris didn't exactly look good last season, so why should fans expect to see him do a lot better this season? The good thing is, it will not take much for him to look good against New Mexico State.

The only game between two ranked teams during opening weekend could say a lot about both teams. Can Wisconsin replace Melvin Gordon? Can Alabama replace Amari Cooper, T.J. Yeldon, and Blake Simms? Fans will find out Saturday night.

There is no reason to believe the Bobcats are going to have a chance to even cover the spread against the Seminoles let alone win. The only reason to watch this game is to see how former Notre Dame quarterback Everett Golson does with his new team.

Virginia Tech shocked the world last season when they beat Ohio State in Week Two So chances are the Buckeyes may be eyeing a chance at revenge here. No one but Urban Meyer knows who is going to start at quarterback yet, but that shouldn't matter with Ezekiel Elliot in the backfield.

Virginia Tech is not going to make it easy on them, but if Ohio State can start where they left off in the Championship Game the spread will be covered by halftime.