By Travis Pulver on September 25, 2015 in Articles › Sports News

The college football season has given fans some great action so far. Underdogs have won, spreads have been covered, and there have been a good number of blowouts. However, at this point in the season the blowouts should become few and far between as conference play begins to get underway.

Many teams have begun conference play and many more will this weekend, but there are still a few that are not. What does that mean for football fans? It means there is going to be a lot more good football, a little less bad football, and not a whole lot of ugly football. 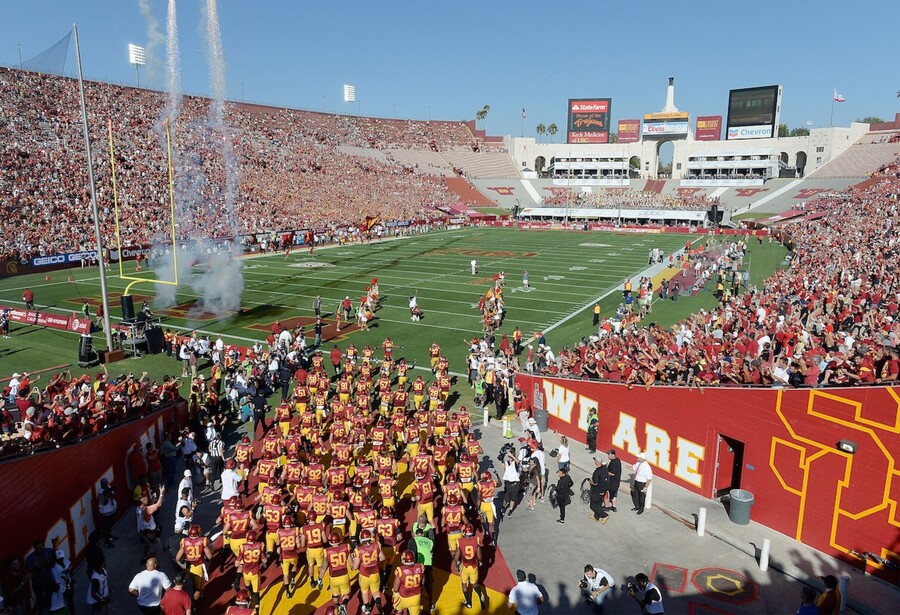 Oklahoma State is ranked in the top 20 in scoring offense and defense, but when you play a bunch of cream puffs for your first three games the stats should be nice to you. Texas has struggled on defense, but if last week's game against Cal is any indication the Longhorns may have found some offense in Jerrod Heard.

Heard's play is probably why the spread is so small. Don't be surprised to see Heard pull this one out.

This one is kind of surprising. Trevone Boykin and the TCU offense aren't operating perfectly yet, but they can still light up a scoreboard. Their only problem is fielding a defense since they keep losing guys. Kliff Kingsbury appears to have a solid team this year, but enough to compete with TCU?

Not even close, but look for this one to be a really high scoring affair.

Arkansas is not a bad team. Brandon Allen is a good quarterback and Alex Collins is a solid running back. For some odd reason, they have been playing like crap the last two weeks. Could it be because their coach talked smack and karma is biting him on the behind? Who knows, but the going is not going to get any easier for the Razorbacks against A&M.

Texas A&M may not be lighting it up like they used to, but they know how to play defense now so they don't have to. Look for A&M to cover the spread, but also look for Arkansas to play its best game of the season and make a contest of it.

This will probably be the best game of the weekend. UCLA and Arizona both have solid running games led by running backs averaging seven or more yards a carry. UCLA has one of the up and coming passers in Josh Rosen and Arizona's Anu Solomon has yet to throw an interception.

The deciding factor may be the linebackers, UCLA's Myles Jack and Arizona's Scooby Wright. Jack is out for the season with an injury and Wright is supposed to be returning from one. The game could hinge on Wright shutting down UCLA's running game and Arizona exploiting the absence of Jack.

Don't expect the spread to be covered.

Oregon didn't need Vernon Adams so he sat in order to protect his injured finger. However, with a much tougher opponent on deck for this weekend he will more than likely. The same goes for Utah and their quarterback, Travis Wilson.

The winner will not necessarily go to the one that can stay upright the most, but which running back can get it going. Oregon has a good one in Royce Freeman, but Utah Devontae Booker is not bad either. Look for Booker to eat up the clock for Oregon making it hard for Adams to get in rhythm (no way Oregon covers the spread).

Cody Kessler has been getting tons of attention for the Trojans, but don't dismiss Arizona State's Mike Bercovici. He may not pass for as many yards as Kessler, but he is one of the best in college football at making magic happen.

Where this one may be decided is with Arizona State's running game and pass defense. They will need Demario Richard to have a solid day (and keep Kessler off the field), and for the pass defense to make Cody Kessler's life miserable (which they can since they are only giving up 134 yards passing a game so far this season). Should they be able to not only will they cover the spread, they'll win.

You have to love it when am unranked team is favored over a ranked team, but this is no ordinary unranked team. Missouri's offense is awful. If there defense wasn't holding opponents to nine points a game they could very well be 0-3 instead of 3-0. Kentucky has a good offense, but they haven't seen a defense like Missouri's.

This one will be good football because it will test a good offense (Kentucky) against a great defense (Missouri), but it will be an ugly game to watch.

Why on Earth is Michigan being given so much credit so early in the season? Yes, they have a pretty decent running game and the defense is not bad, but the quarterback play is awful. Jake Rudock makes too many mistakes for the Wolverines to beat a good team, which BYU is.

Even though they are down to their second string quarterback, Tanner Mangum is no joke. The youngster has game, and will love to test the Wolverines secondary all day long. Michigan will not be able to just focus on the passing game though. If they do Adam Hine will run all over them.

Michigan will have to lean heavy on the running game (in order to keep BYU's offense off the field). If they do, the Wolverines could walk away a winner in this one, but don't expect the spread to be covered.

How in the world is Auburn the favorite?  The Tigers have looked awful this season on both sides of the ball. With a new quarterback starting this weekend there is no telling if the offense is going to be any better or worse.  Mississippi State, on the other has a veteran quarterback that is playing well, they have a decent running game, and their defense is alright.

It is hard to picture winning this one let alone being favored.

The Leonard Fournette for Heisman campaign will be taking a trip to New York this weekend. Eric Dungey is a decent quarterback, but he is going to be out of his element against the Tigers defense. Look for Fournette to have another huge day running over defenders and shrugging them off like fleas.

There is a slim chance this one could get interesting. Baylor has started slow in the first half this season. If Rice can get its running game going and get out to an early lead maybe they'll get lucky and the Bears offense will start the second half out of sync.

Don't count on it.

Notre Dame better go to confession after they finish beating on the poor Minutemen Saturday. What the Fighting Irish are going to do to Massachusetts is going to be wrong.

Louisiana Monroe is not a terrible team, but they are catching an Alabama team coming off its first defeat of the season and eager to reassert itself. The Warhawks defense may prove to be a little challenging for the Alabama passing game, but that's okay. Nick Saban is just going to cram Derek Henry down their throats anyway.

Vanderbilt has improved immensely over last season, but the Commodores are going to be no match for Ole Miss. Chad Kelly is playing better than any quarterback in college football right now, and will look to tear up Vanderbilt early and often.

Oh – and he probably will.

Yuck. Whoever made Ohio State's schedule should be ashamed of themselves. The defending champs are playing a bunch of teams they could kill in their sleep. Funny thing is, of course, that they are not. They struggled last week in a game that should have been easy.

It is highly doubtful that they will struggle again Western Michigan, but if they do there is no way the CFB committee can make them the No. 1 team.