Last weekend, college football fans got to see the Heisman race and the College Football Playoff poll turned on their respective heads when Alabama dominated LSU and shut down Leonard Fournette. This week, there isn't a game that could impact both as much as that contest did, but should Baylor beat Oklahoma they could force the CFB poll to rethink possibly Notre Dame's inclusion in the tip four.

With the Fighting Irish playing Wake Forest, should they not destroy the Demon Deacons and Baylor wins, they probably will drop out of the top four – but will that open the door for No. 5 Iowa (if they beat Minnesota) or will No. 6 Baylor leapfrog into the top four?

Should Mississippi State pull off the upset against Alabama things could really get interesting.

Those games and more highlight a weekend full of some really good games, a lot of really bad ones, and a handful with spreads that will make you wonder what the odds makers were drinking. 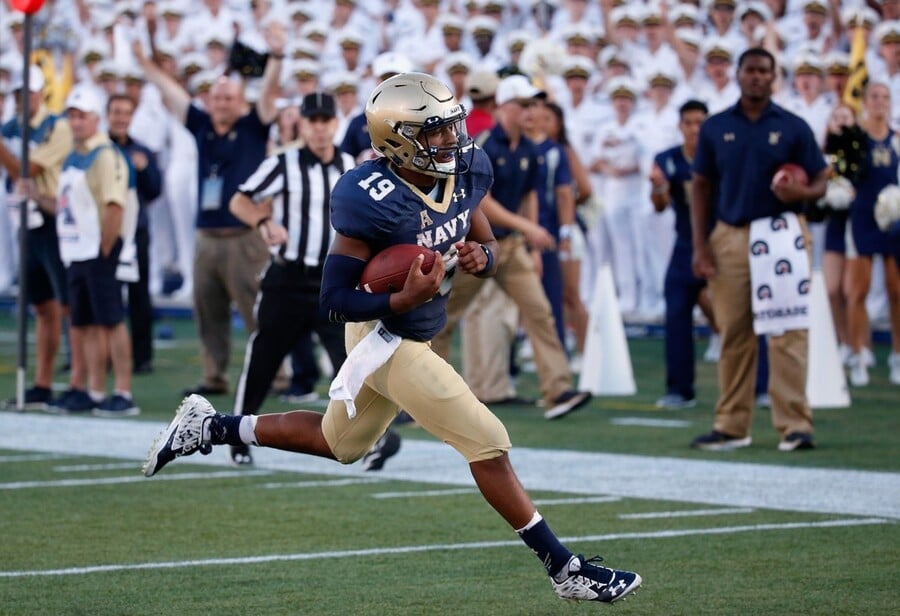 What worries me about Mississippi State is that they rely on Dak Prescott a lot. Can he handle it? Yes—but only if he can get in a groove early on and find his rhythm. The Alabama defense is going to make that pretty hard. I wouldn't be shocked if Mississippi State pulled off the upset, but I would be shocked if Alabama covered the spread.

This one should go under ugly, but it deserves a little extra recognition because it involves a service academy that is favored by more than three touchdowns. Can anyone remember the last time that happened? I can't.

Navy will win this one by 28+ and Keenan Reynolds will finally take over sole possession of the NCAA career rushing touchdown record.

This will likely be the best game of the weekend. You have two teams with incredibly good offenses chock full of play makers. Both can score at will having averaged over 44 points a game, and typically generate over 500 yards of offense a game. As good as the offenses are, this one will come down to the defenses—sort of.

Navy proved that the best defense can be a good offense. The run-happy Midshipmen didn't allow Memphis the opportunity to mount a comeback simply by keeping them off the field. Houston is not as good a running team, but between quarterback Greg Ward and running back Kenneth Farrow they are pretty darn good.

Look for Houston to win and cover the spread. Yes, the Cougars are that good.

The Razorbacks are a frustrating team. They have proven that they can play extremely well when they want to as was clearly evident against Auburn two weeks ago and Ole Miss last weekend. To beat LSU the will need to score at will like they have the last two weeks that way the Tigers will need to lean on the passing game more and not feed Leonard Fournette at will.

If they can do that the Razorbacks may pull out another win. If they can't the Tigers get back on the right side of the scoreboard. If you like to take risks go ahead and take Arkansas and the points, but otherwise leave this one alone.

Stanford is by far the better team of the two. Kevin Hogan is playing well and Christian McCaffrey deserves to be the Heisman front runner, but gets no love from the polls. With the Oregon defense giving up close to 500 yards a game and 37 points it is not hard to see Stanford running up the score. However, Vernon Adams is a solid player and the Ducks have a good running back in Royce Freeman.

Take Oregon and give up the points.

This game is one that could have a serious effect on the college football playoff poll. The knock on Baylor has been that they haven't played anyone yet. Oklahoma certainly qualifies as someone. However, this will be the first real test for the team with Jarrett Stidham as the quarterback. In his first start against K-State he played well, but the offense didn't score nearly as much as it had been.

The Sooners have a good quarterback in Baker Mayfield and a two-headed backfield beast in Samaje Perine and Joe Mixon. I would like to say that Baylor will win this one, but the Bears are not the best at stopping the run. Look for the Sooners to feed their running backs all day long and win this one. 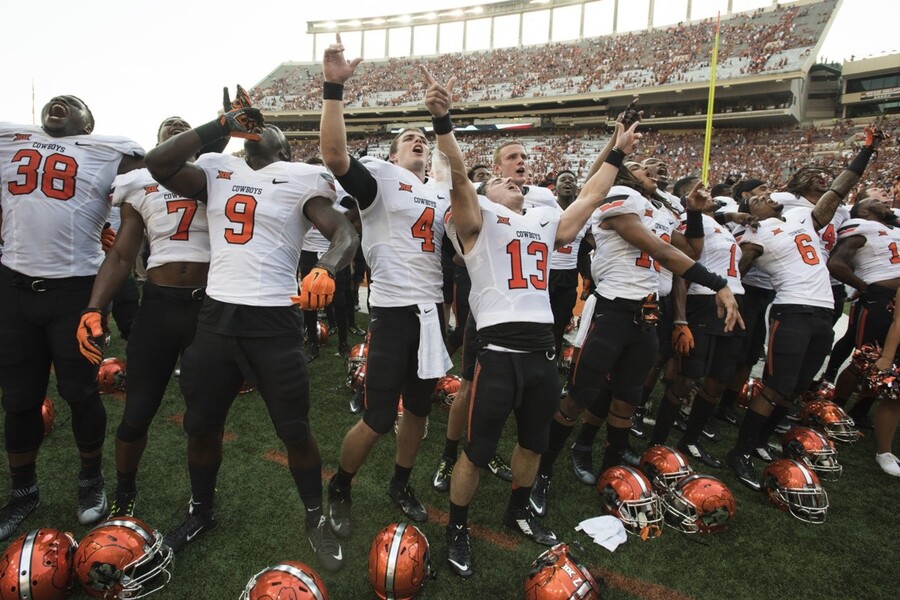 Sometimes I just don't get what the odds makers are thinking. Yes, South Carolina has played much better since Spurrier left, but the offense is still not very strong and the defense is still giving up over 400 yards of offense a game. Florida's defense is one of the better ones in the nation and its offense has proven to be capable as well.

The spread on this one could have been at least 14, but the Gators will likely win by more than that.

This one should be going under the 'Ugly' category because that is exactly what the game should be—ugly. Ohio State should dominate a team like Illinois from beginning to end, but there is no telling if they will. With J.T. Barrett at the helm, they probably will, but it could end up being Cardale Jones.

Either way they'll beat the spread, but it will not be worth watching.

Why on Earth is Iowa State being given this much credit? Oklahoma State has a good defense and an offense that can almost score at will that has more playmakers than it knows what to do with. I can't see any way that the Cowboys are not leading this one by 14 midway through the first quarter and by 30 (if not more) going into the final quarter.

Either Patrick Towles is getting disrespected or the Vanderbilt defense is getting more credit than it deserves. That is the only way I can rationalize Kentucky only being a three point favorite. The Commodores are terrible on offense, and will likely still be terrible Saturday even though Kentucky doesn't have the greatest defense.

Patrick Towles and the Kentucky offense have the potential to be explosive. If he can avoid throwing interceptions the Wildcats should win by 14 if not more. Go ahead and take the Wildcats and give the points on this one. 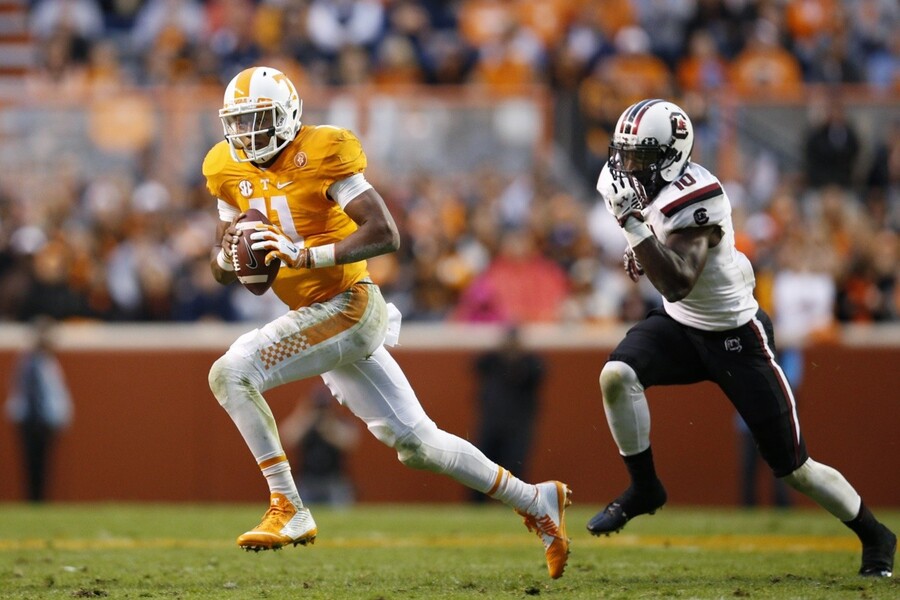 This one is easy. Tennessee has some play makers, and has been competitive with some of the best teams in the nation. North Texas is only scoring 17.6 points a game, and is allowing 45.6. Look for Joshua Dobbs to break some single game records.

This one should be easy for the Volunteers.

Kansas is getting TCU at the worst time possible. The Horned Frogs are coming off a terrible loss that has knocked them out of contention for one of the four CFB playoff slots. It also knocked Trevone Boykin out of the race for the Heisman. The team is going to be out for blood and Boykin is going to want to put his four interception performance behind him.

This one will get ugly fast.

Notre Dame is going to want to make this one look as good as possible to prove they deserve to remain in the top four of the CFB poll, and they really shouldn't have any problem doing just that. DeShone Kizer is playing well, Will Fuller is one of the best in the game, and even if C.J. Prosise does not play because of the concussion he received last week the running game will be fine.

Look for Notre Dame's defense to contribute on the scoreboard this week as the Fighting Irish easily cover the spread.

Clemson is playing lights out football. They are scoring points and making it hard for other teams to do the same. Syracuse, while they are gamers and will do their best to make this one interesting, are completely out of their league.

Easy win for the Tigers. Expect the spread to be covered early in the third quarter.

This one should absolutely be ugly. The Aggies should trounce Western Carolina. They should win this one by 45 points, but the offense has proven to be unpredictable. You can't tell how good they are going to play no matter who they start at quarterback (which is still up in the air this week). They were supposed to kill a soft opponent last year, but barely won.

It should be a no-brainer, but you can't trust the Aggies. Stay away from this one—far away.

Jared Goff needs this one to be ugly. He needs to prove that he is the capable quarterback that many NFL scouts think he is. Against an Oregon State team that has regressed as the season has gone on. They don't really have an identity on offense and have trouble stopping people on defense.

Goff is capable of taking this game over and making it ugly. Will he? I don't know. Stay away from this one too.