At this point in the season, the men are being separated from the boys, but in some cases the men are still playing boys. It will not happen, but it would be awesome if Florida Atlantic could take down Florida, if Chattanooga could beat Florida State, or if Charleston Southern could defy the odds and take down Alabama.

It's a good thing we still have some solid conference match-ups to watch, like LSU-Ole Miss, Ohio State-Michigan State, and USC-Oregon (to name a few).

So if you want to watch some good football, there will be plenty of competitive games this weekend, some really ugly ones, and a few with questionable spreads. 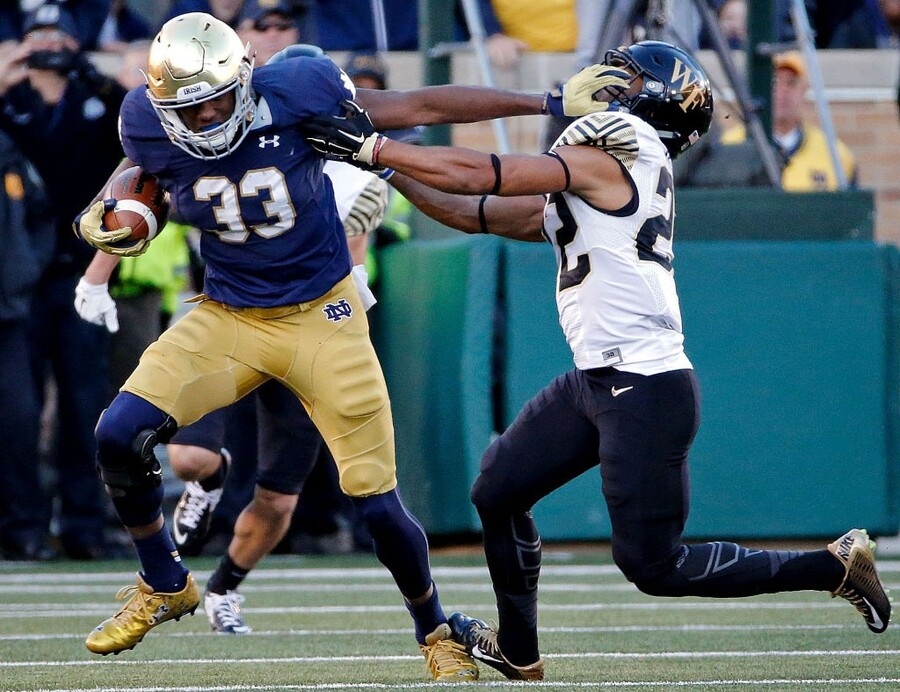 As much as I like Notre Dame I can't see the Fighting Irish winning this one by 17. DeShone Kizer has proven to be quite capable and Notre Dame seems to be able to run the ball no matter who lines up in the backfield. However, Boston College has the best defense in the country (No. 1 overall and against the run; No. 5 against the pass).

Notre Dame is going to have a hard time getting anything going. They'll win, but they will not come close to covering the spread.

Memphis has gone from being a media darling, skipped over being a has-been, and gone straight to being a never was after losing two in a row. They looked like they were going to get back on track against Houston last week, but the defense flopped in the second half giving Houston the chance to come from behind. Temple is a capable team that did have a good defense, but after giving up 44 to USF you kind of have to wonder about them.

Memphis should be able to overpower the Temple defense with ease, but the question will be whether their defense can play a full game. I'm going to say that they will and they win this one by 10.

A few weeks ago this game would have been a no-brainer. Michigan would be picked to win this one easily because their defense would shut down the Nittany Lions and the offense would do enough to win. After losing to Michigan State, barely winning against Minnesota, and being pushed to double overtime by Indiana the Wolverines have been exposed as fallible. Penn State running back Saquon Barkley has been playing better and better every well and will present a big test for the Michigan defense.

This game is going to be close, and will likely be won by the better defense. I don't think either team will win by more than a field goal, though, so go ahead and take Penn State and the points.

The great Leonard Fournette is not so great after all. Alabama and Arkansas showed the world how to slow the big man down, and Ole Miss should be able to follow suit. Without a running game the LSU offense will be in trouble. Brandon Harris is an okay passer, but he isn't good enough to carry the load.

The question will be whether LSU's defense is up to the task of stopping Chad Kelly. I'm going to say no. Between his running and throwing to Laquon Treadwell look for the Rebels to win by a touchdown.

If you want to see a good defensive game than this one is for you. Both squads have stingy defenses that don't give up many points (Northwestern 17.6; Wisconsin 12.3). Neither offense is particularly talented, but the Badgers are averaging about a touchdown a game more (28.7 to 21.1). However, both teams are coming off of close wins over teams they should have killed making it a little harder to pick a winner.

In the end it will be the defense that wins the day. However, neither offense will score much so go ahead and take the points and Northwestern.

It is about time the Buckeyes play someone tough. However, with Connor Cook nursing a hurt shoulder and the Spartans not having a running back that can take over the game the edge still has to go to Ohio State. J.T. Barrett and Ezekiel Jones are too dangerous a duo, and the Spartans defense is not going to be able to slow them down enough.

However, I do think the Spartans will be able to slow the Buckeyes down (just not enough to win). Take the Spartans and the points.

Brett Bielema makes it easy to laugh at the Razorbacks sometimes, but he does have some good players on that team. Brandon Allen is a very good quarterback and Alex Collins is a beast in the backfield. There only problem is a defense that gives up 27.9 points a game. Dak Prescott is a good player, but he is the Mississippi State offense. He'll have a hard time running against the Razorbacks, but since he'll be able to pass with ease that will be okay.

While Prescott will have a good day expect to see Allen and Collins to have good days as well—Razorbacks by a touchdown.

It is nice to see a service academy playing as well as Navy is and get the credit they deserve in the polls. This one could get exciting if Tulsa is able to get its offense going. They can pass well and don't have a bad running game either. However, they may have a hard time getting on track, but the Navy running game may never give them a chance.

Look for Navy to win this by at least two touchdowns and for Keenan Reynolds to have his third 100 yard passing game of the season.

This could actually be a good game. Texas A&M doesn't seem to know what it wants to do on offense and since play defense is the only thing Vanderbilt does well that could give the Commodores the edge they need. Vanderbilt's best chance would be to test the A&M run defense by throwing Ralph Webb at it as often as possible, and slide in a few passes to keep the Aggies defense honest.

To keep Vanderbilt from thinking they have a chance the Aggies are going to need to spread out the Commodores and get the passing game going. That will make it easier for Tra Carson to get on track, and as long as whoever plays quarterback doesn't turn it over the Aggies should win this one by 10.

This is going to be the most exciting game of the weekend. Jarrett Stidham is not as good as Seth Russell, but the Baylor offense is still pretty potent thanks to Shock Linwood, Corey Coleman, KD Cannon, and Jay Lee. Oklahoma State has plenty of play makers on offense as well. James Washington is fun to watch as is Mason Rudolph and J.W. Walsh.

Oklahoma State's defense is not as tough as Oklahoma's so don't expect to see Baylor get stopped as much as it did against the Sooners. Look for Baylor to get Corey Coleman involved much more than it did against Oklahoma. As for a winner, this one is too close to call, but the over/under is a no-brainer. These guys will combine for more than 78 points.

On paper this should be a great game, but with Trevone Boykin's status up in the air it could be a total snooze-fest. With Boykin this is a game, but without him the Sooners are going to roll right over the Horned Frogs.

As important as Boykin is to TCU, until his status is known Vegas will not bother to put a spread on this. Even if they do—stay away.

Offensively, both teams are pretty good and average around 37 points a game. However, Cal is pretty one dimensional. They will go as far as Jared Goff can throw since they don't have much of a running game. Stanford, on the other hand, is good at throwing the ball and have a pretty good running back in Christian McCaffrey.

If Cal had any kid of defense this would be a good game, but they don't. Stanford will get back on the right side of the win column this week with a two touchdown win. 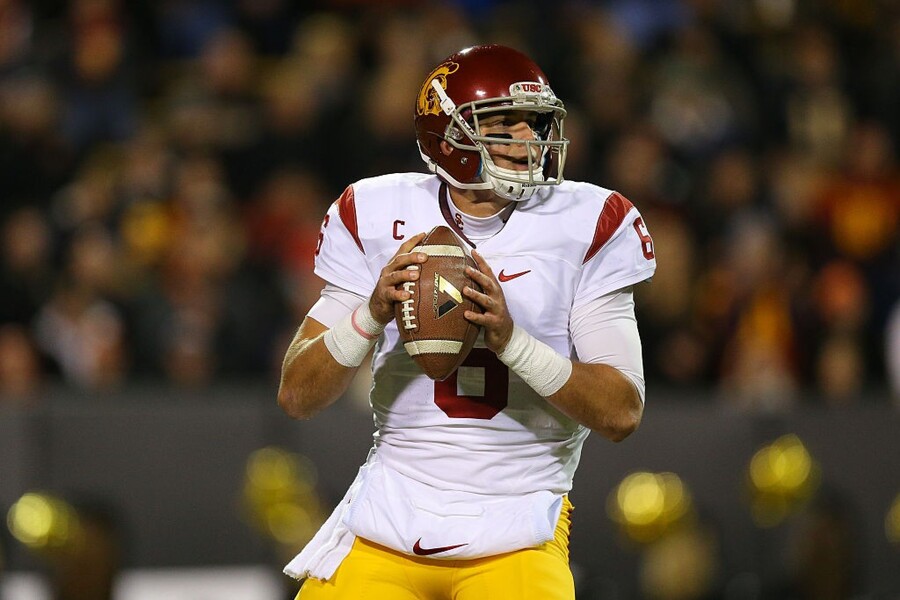 This one is kind of surprising. USC has been playing well all season, but a couple good games out of Vernon Adams has the Ducks favored over the Trojans? Really? A healthy Vernon Adams does add another dimension to the Oregon offense, but the Oregon defense is lacking. Cody Kessler will have a good ole time carving it up.

Look for USC to win this one by at least a touchdown.

This one has all the trappings of a good, close contest, but the wrong team is favored. Both teams have pretty good offenses capable of putting up a lot of yards and points. Utah does it primarily behind running back Devontae Booker and UCLA behind quarterback Josh Rosen and running back Paul Perkins.

Defensively, they are not drastically different. Utah gives up around 23 points a game and UCLA 25. The difference in this one will come down to which quarterback can get hot. Chances are Rosen will before Wilson. Look for UCLA to win by a touchdown. 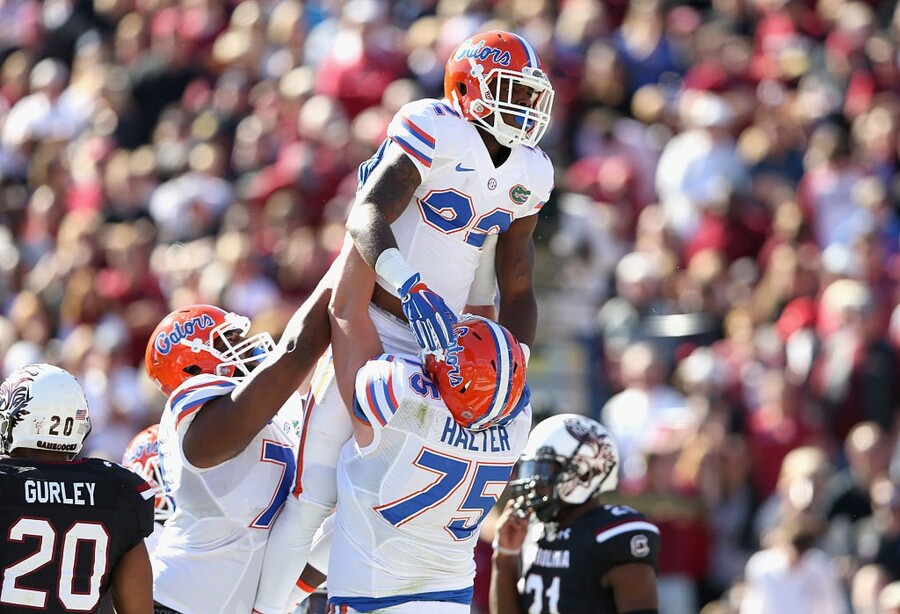 You would think that the cupcake games would be done by now, but not yet. There really isn't much that needs to be said about this one. Florida's scout team would beat Florida Atlantic by 31 points. Their first team will have a 31 point lead at half time.

At this point in the season you almost have to feel sorry for Kansas. They have redefined what bad football is this season. West Virginia's defense is going to make things tough on the Kansas offense, and their offense is going to have a field day.

Look for Skylar Howard and Wendall Smallwood to have a career days against the Jayhawks and have this one salted away sometime during the third quarter.

This is a game only Tigers fans will enjoy since they are the only ones that are going to play anything closely resembling good football. Look for the spread to be covered by the end of the third quarter.

There is a very slim chance that this one could actually become a good game. Idaho can actually move the ball so if the Auburn defense comes out flat this one could end up being close. Don't count on it though. The Tigers need this one to become bowl eligible because they are probably not going to beat Alabama in the Iron Bowl.

Look for Auburn to not play around with this one. Since Idaho gives up around 280 yards on the ground a game, look for Auburn to pound it down their throats early and often. It may take them till the fourth quarter, but they'll get the spread covered.

I'm not sure why Washington State is only favored by 15. Luke Falk is one of the best gunslingers in the nation and will likely tear up Colorado with relative ease. If Colorado had a running game to speak of and hadn't lost its quarterback to injury last week they might be able to keep this one close—but they don't. Washington State will have a 15 point lead by the end of the first quarter.