From the Gridiron to the Boardroom: Ex-49er Patrick Willis in Silicon Valley

The story of Patrick Willis is one of those feel good, rags-to-riches stories, like those that Cinderella and J.K. Rowling have made us all love – full of heartache, dedication, and joy. He began his life in poverty, with a mother who abandoned the family when he was a child and an abusive father. Impoverished, Willis had begun to work as a farm hand by the age of ten, to help the family make ends meet. By the time he was sixteen, things at home had reached an all-time low, forcing him and his siblings to go live with their new parental guardians, one of which happened to be Patrick's high school math teacher and basketball coach.

In the midst of a troubled and poor childhood, having to act as a leader at a young age to his even younger siblings, being displaced from home, and dealing with the loss of his brother in a drowning accident in 2006, Willis always excelled on the football field. In an interview with Mashable last week, Willis said:

"People always told me when I was growing up that if you want to be something great, you have to be this physical specimen that can jump up to here and all that."

And jump up to here, he did.

After excelling on the gridiron as both a linebacker and a tailback at Hollow Rock-Bruceton Central High School in Tennessee, he committed to playing linebacker for Ole Miss. There he was a two-time All-American, where he won multiple awards in his senior year, including the award for the best linebacker in all of college football. 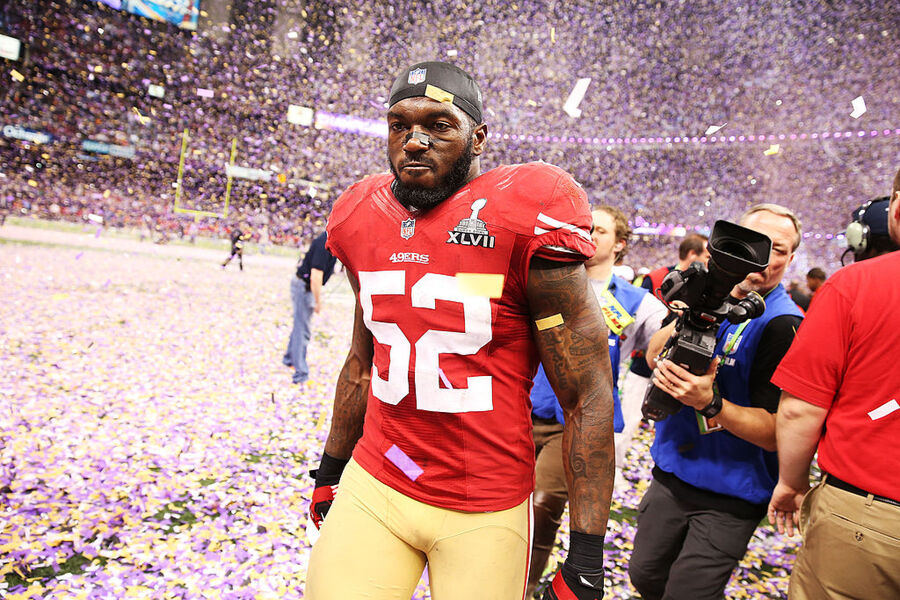 From there, he became a first-round NFL draft pick with the San Francisco 49ers, where he would become the NFL Defensive Rookie of the Year in 2007 and be selected to the NFL Pro Bowl in seven out of eight seasons. In 2010, he signed a five-year extension to his contract, worth $50 Million, making him the highest-paid interior linebacker in the league at the time.

But it wasn't all sunshine and unicorns for Willis. His career was fraught with injuries. In 2014, he missed the majority of the season with a nagging toe injury. In March following his eighth season, he shocked the sports world by announcing that he would be hanging up his crimson and gold #52 for good.

During his retirement press conference, Willis exuded a sense of peace with his decision, a peace founded on the fact that he has other interests in life, as well. "For me, there's more to my life than football," said Willis. "It has provided an amazing platform for me to build on, but it's my health first and everything else just kind of makes sense around it." He went on to say, "Retired doesn't mean you're dying, it means you're putting something to rest and going on to do other things."

Which is exactly what he did.

According to Sam Laird of Mashable, Willis met a fellow resident of his Silicon Valley neighborhood a couple years ago who would change his life. Eren Niazi, founder of Open Source Storage, a storage and infrastructure company committed to aiding clients with their data storage needs, reportedly came over to help Willis get some things out of his car as a friendly gesture, not even knowing who Willis was.

Their relationship grew over time, and Willis was inspired by Niazi's rise to success in the Silicon Valley tech industry from humble beginnings. Niazi was a high school dropout with no college credit to his name, and had risen up the corporate ladder simply through grit, dedication, and creativity.

Shortly after announcing his retirement from the NFL, the former football superstar had signed on full time, as the Executive Vice President for partnerships at Open Source, working under friend and founder, Eren Niazi. "A lot of guys come in with a big ego, but Patrick's not like that. He's just a total pleasure to work with," Niazi said of Willis.

According to Willis, this is an embodiment of exactly what he wanted when he retired.  "For me, this is an opportunity to be able to tell young kids that you can be more than just a physical specimen to be great," Willis told Mashable. "I'm a person that can't speak about something until I've done it myself."

He might not be making $10 million a year any longer, but he's working hard and showing people that anyone really can do anything.

From a kid taking lots of hard knocks, to collegiate All-American to perennial Pro-Bowler to rising Silicon Valley tech star, only one question remains – what will Patrick Willis be next?

One thing's for sure: he'll do it well.