NBA fans remember that back in 2007, there was a real debate over who the number one pick in the draft should be. The Portland Trailblazers had the first pick, and selected big man Greg Oden out of Ohio State. The Oklahoma City Thunder (then the Seattle SuperSonics) had the second selection, and chose Kevin Durant from Texas.

Fast forward eight years: Durant is one of the most prolific players in the league, having won four scoring titles, an MVP, an Olympic Gold Medal and the Rookie of the Year award. Meanwhile, Oden's career has been derailed by injuries, and he's only appeared in 105 NBA games, in total.

Oden, who has a net worth of $15 million, has earned $24.4 million over his career, which cashes out to $232,380 per game played. Now he's attempting to jump start his career overseas. The Jiangsu Dragons of the Chinese Basketball Association just announced that they're signing the 27-year-old center to a one-year, $1.2 million deal. That means Oden will have earned more than $25 million throughout his career. 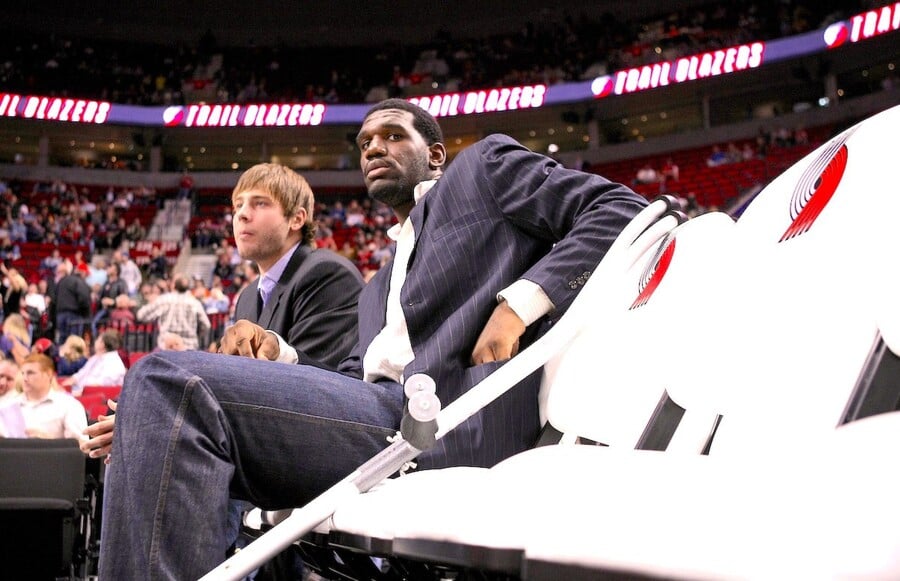 PORTLAND, OR – OCTOBER 10: Greg Oden #52 of the Portland Trail Blazers, who is out for the season after undergoing microfracture surgery in his knee, sits on the bench to watch a pre-season game against the Los Angeles Clippers at the Rose Garden. Jonathan Ferrey/Getty Images.

Will Oden finally break out as a star player in China? History hasn't been kind – he missed the entirety of his first season in the league due to microfracture surgery on his right knee. He appeared in 61 games the following year, though foot and knee injuries caused him to miss a few weeks here and there. During the 2009-10 season, Oden only played in 21 games, before fracturing his patella and missing the rest of the year.

At the start of the following season, the Blazers announced he'd again have microfracture surgery, this time on his left knee. He had a setback during his recovery, and had two surgeries in the span of 17 days. During the second surgery, more damage was found in his articular cartilage, and he underwent his third microfracture surgery. After being released by the Blazers and sitting out all of the 2012-13 season, Oden signed with the Heat. He saw his first NBA action in almost four years, and contributed about nine minutes off the bench for a team that reached its fourth consecutive NBA Finals.

Over his career, Oden has averaged 8 points, 6.2 rebounds and 1.2 blocks a game. That's a far cry from the dominating presence the Blazers hoped he'd be when they drafted him. Oden's not done with his NBA dream yet; he's said he intends to return to the league for the 2016-17 season. He'll have the opportunity to turn some heads in China. He'll just have to stay on the court to do that.