Notre Dame linebacker Jaylon Smith was one of the best in college football last season. He was a beast for the Fighting Irish, and many expected him to be a top ten pick in the 2016 draft – then the Fiesta Bowl happened. During the last game of his college career, he blew his knee out.

He could have stayed in college another year to recover and rehabilitate his knee. If rehab went well, he could have entered the 2017 draft and would have probably still been in high demand. A good showing at Notre Dame's Pro Day and the Combine next year would have been good enough for a few teams to consider him a first round pick again.

Instead, he opted to go ahead and enter the draft this year and see what happens. If the Combine is any indication, it is not going to go well for him. 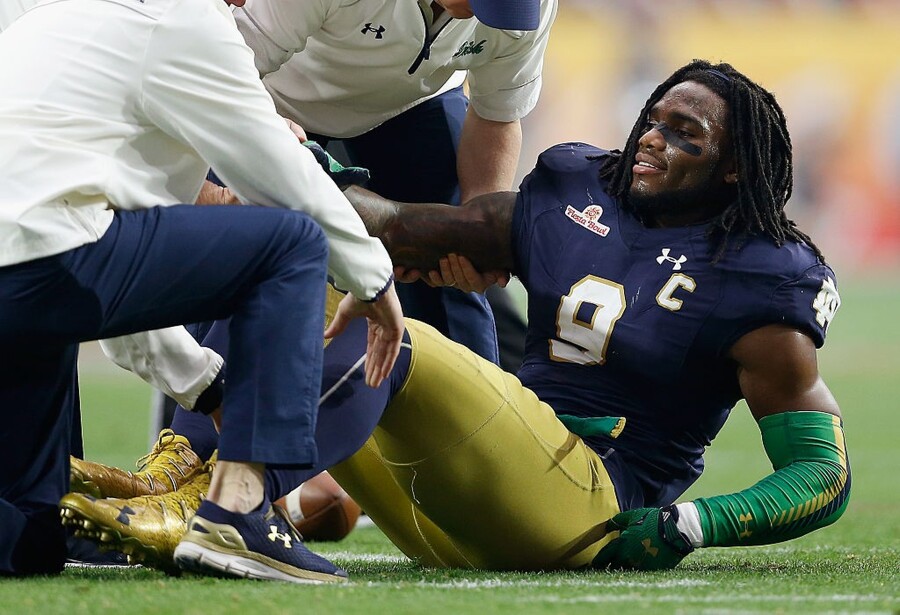 Smith had surgery to repair the ACL and LCL in his knee on January 7, 2016. He was doing well enough at the Combine to walk around and stand at the podium during his media time. It was good to see him walking within a few weeks of surgery, but the report from his medical evaluation painted a pretty ugly picture.

"A big part of this is the medical… I've texted and talked to at least five different teams since (Saturday) night to ask them about Jaylon Smith. None of them will get specific, but the one common denominator is every team's told me it's bad, on the knee," NFL draft expert Mike Mayock said on the NFL Network.

It's been reported that some teams have taken him off their draft boards pending further testing. Some teams think Smith is going to miss the entire 2016 season—if he ever plays at all.

While initial reports in January did not indicate there was any nerve damage, reports coming from the Combine have indicated that there is indeed nerve damage in his ankle and knee. The severity of his injury has been compared to that of former South Carolina running back, Marcus Lattimore.

Lattimore ended up being taken in the fourth round of the 2013 draft. Should Smith end up falling that far, he will end up cashing in thanks to the loss of value insurance policy. The policy, which Notre Dame is allowed to pay for, cost $50,000 and could pay out as much as $5 million for Smith, depending on how far he falls.

So should he fall as far as Lattimore he will definitely have $5 million coming his way.