On Wednesday morning, the world learned that Saul "Canelo" Alvarez had signed a 5-year $365 million contract with newly-launched subscription sports streaming company DAZN. The contract will cover Canelo's next 11 fights starting with his December 15 match against Rocky Fielding at Madison Square Garden.

It's a huge deal. Literally and figuartively.

A $365 million, 5-year deal is enough to be make Canelo the highest paid athlete in the world. Not only is it the largest contract in terms of total dollars, it also destroys the previous records in terms of earnings per year. The previous record holder for total dollars was baseball player Giancarlo Stanton who signed a 13-year $325 million contract with the Miami Marlins back in 2014.

In terms of earnings per year, it's hard to know exactly who had the previous record because many of the soccer stars you know of like Ronaldo and Messi have deals that are complicated and not totally confirmed. However, for your reference in July 2018 LeBron James signed a 4-year, $153 million deal with the Lakers. That breaks down to $38 million per contract year. Canelo's deal will essentially pay him $73 million per year over the next 5 years.

Not only is he now officially the highest paid athlete on the planet, when you include endorsements, by the time his contract is up Canelo's career earnings will top $600 million. After today's news, Saul "Canelo" Alvarez's net worth is $100 million.

You know who isn't happy for Canelo? Floyd Mayweather.

Despite being "retired" from boxing, Floyd is clearly not retired from smack-talking.

Earlier today Floyd took to instagram where he posted a photo very similar to this one (we don't have the rights to show the actual photo): 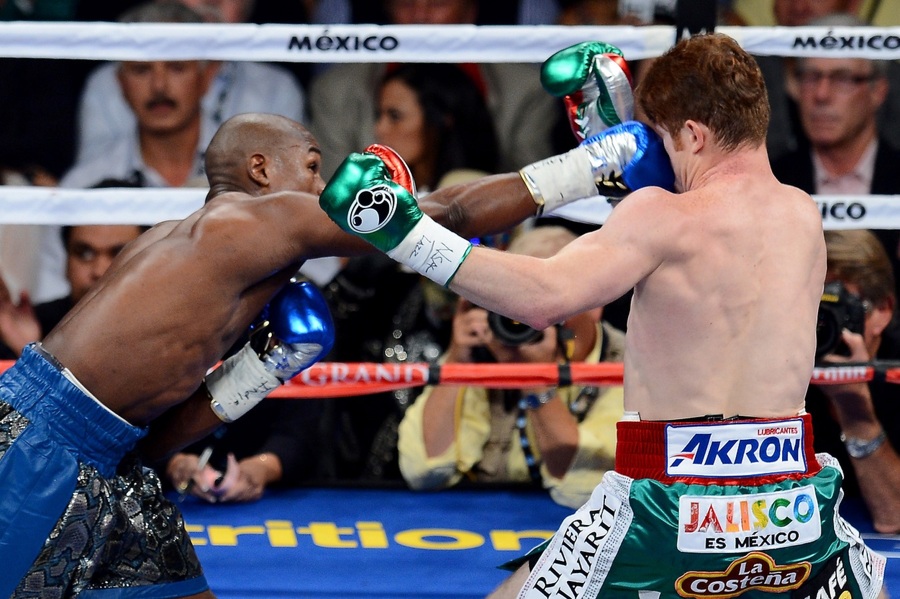 And here's the caption Floyd added to his photo:

"It didn't matter if Canelo ate his PED steak or not this night, this was by far the easiest fight of my career! Connor McQuitter was a way better fighter than Canelo's cheating ass and I beat the brakes off him too! It takes me 36 mins or less to make $300 million plus. It literally takes me 1 night and 1 fight to make what you might make in 5 years and 11 fights! So really, who's still winning? You do the math!"

The "PED steak" comment is a reference to the fact that in April 2018, Canelo was suspended from boxing for 6 months for doping violations. He would later claim that contaminated beef in Mexico was the source of the banned performance-enhancing drug that reportedly showed up in one of his tests.

The rest of the comment is pretty self-explanatory. Floyd did indeed earn $300 million from his August 2017 fight against Conor McGregor. Though, technically speaking, $300 million is less than $365 million. But we're nitpicking.

As of this writing, Floyd Mayweather's career earnings top $1.1 billion. And he's talking about coming out of retirement to fight Khabib Nurmagomedov, who just defeated Conor McGregor in a UFC match. Floyd has indicated he'd be willing to take on Khabib and would earn north of $200 million if that fight actually happened.

And Floyd wasn't quite done social media smack-talking. Just a few hours after his Canelo post, Floyd put up a rather embarrassing message aimed at another former opponent, Oscar De La Hoya. Before I show you the post, let me give some background –

Canelo fights for Oscar's "Goldenboy Promotions". He is Oscar's biggest star. Back in 2007, photos surfaced of Oscar De La Hoya wearing fishnets and women's lingerie. The photos are rough. Especially for the image of a proud Mexican fighter in such testosterone-driven industry. He denied the photos were him for nearly a decade, claiming they were a photoshop. They weren't. He finally admitted the photos were him and that they were taken by a girlfriend named Milana Dravnel.

"11yrs ago,I fought her and her name is Oscar "Golden Girl" Dela Hoya. Please leave the most disrespectful caption you can think of."

And here's the photo: