It's safe to say that UFC President Dana White and Floyd Mayweather won't be exchanging Christmas presents come December, because the two have quite a frosty relationship. Earlier this year, Floyd and Dana exchanged barbs after the undefeated boxer claimed that there was a racist double standard among black and white athletes in combat sports. Floyd pointed out that UFC's current golden child, Conor McGregor, is widely celebrated for being brash, while he himself is widely criticized for his loudmouth antics. Dana went on to call Floyd "delusional" for his assertions, and said that "people are judged more on their personality than their race." Well, we have yet another Mayweather/White controversy, and interestingly enough, it yet again involves Conor McGregor.

Conor McGregor made history at UFC 205 this past Saturday night at Madison Square Garden, after he knocked out Eddie Alvarez to become the first fighter in UFC history to hold titles in two divisions at the same time. McGregor defeated Alvarez with relative ease, knocking out Alvarez in just two rounds. While McGregor's performance garnered acclaim from many fighting experts, there was one man who wasn't impressed: Floyd Mayweather. 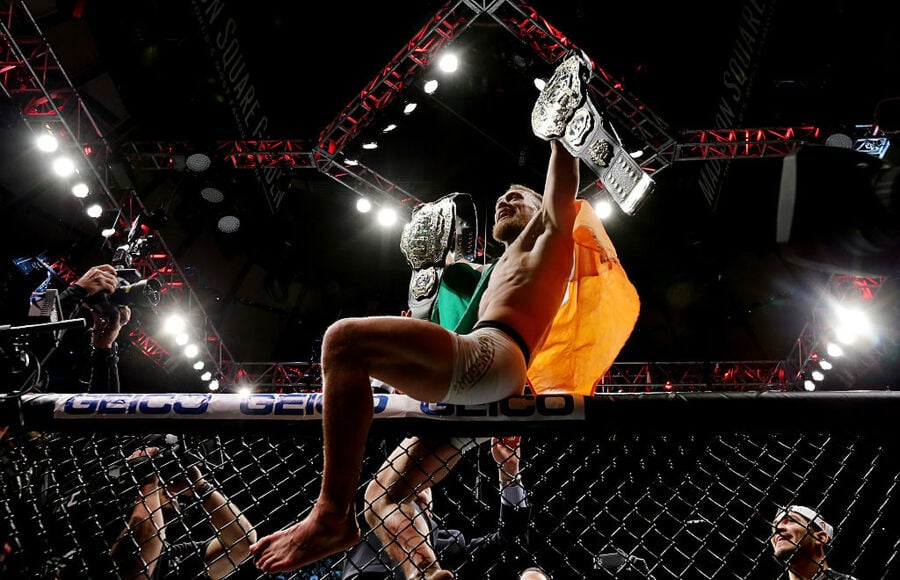 Mayweather told TMZ, following the fight, that any comparisons with him and McGregor are "disrespectful" and that he has a long way to go before McGregor could become as successful as he is.

He continued, "I'm a legend, a living legend; to the sport of boxing I gave years and years of hard work; there was blood, sweat and tears… Conor McGregor can go out there and do what he do, but never compare Conor McGregor to me, it's a total disrespect… Once again, I'm an elephant. Elephants don't beef with ants, an [sic] elephant is so large it doesn't even see ants."

Well, Dana White didn't take too kindly to Mayweather's comments, and slighted the currently retired boxer's fighting style. "Conor McGregor… if he touches you, you go to sleep. Floyd puts people to sleep too, with his fighting style, not with his hands," said White to TMZ. He continued, "You know how Floyd knocks people out? When they're not looking. Watch the Victor Ortiz fight."

White went on to heap praise upon McGregor when he stated the following, "This kid's just getting started. This kid's 28 years old. Floyd can say what he wants about Conor, but even other fighters have to respect him. He's special. Floyd's never even come close to doing to other fighters what Conor does."

Conor McGregor didn't stay silent in this whole situation. When asked by TMZ what he thought about Floyd's comments, he simply said, "tell [Floyd] to come say it to my face."