The rich want to get richer. That's why they are so stinking rich and why they stay so stinking rich. They don't do anything just for the sake of doing it. They want to be paid the absolute most for their efforts and their time. And time has shown that is exactly how boxer Floyd Mayweather Jr. sees things, and it is likely that's why he finally agreed to fight Manny Pacquiao back in May. While the fight has been widely criticized by the public and considered an utter disappointment, by the numbers, it lived up to what a Fight of the Century should produce.

With a 60 percent cut of the purse, Floyd Mayweather made somewhere in the vicinity of $280 million. Yes, you read that right. It was not a typo. The man made freaking $280 million for one night's work. Amazing, right? Well, now it has become a problem.

What? How could making $280 million for one night's work be a problem? Easy—because he wants to do it again. The rich don't get richer by working for less after they find out how much they could make for the same amount of work. The problem is that there are precious few fighters in the world he could face and have even a remote chance of making another monster payday. It would have to be someone with a reputation as epic as his; someone the viewing public would love and adore.

Oh – and someone he could probably beat (because you know he doesn't want to face a serious challenger). 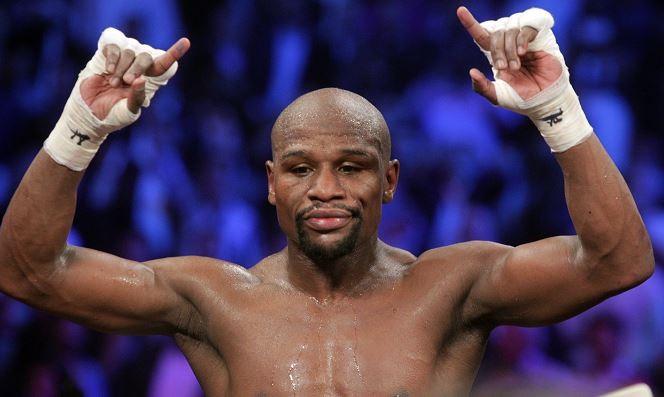 Mayweather could fight Pacquiao again, but after saying he would be up for it, he changed his mind because he didn't like Pacquiao's attitude after the fight. Just to make sure he got his point across, he called him a sore loser and a coward.

Recently, Mayweather extended a challenge to probably the only other fighter who would generate a similar kind of payday – Oscar De La Hoya.

This would give Mayweather a chance to fight the only man who was able to convince one judge he deserved to lose. His win over De La Hoya was the only split decision win of his career. So while he did get the win, he didn't dominate the fight. A rematch would give him the chance for redemption.

He will not get it of course. De La Hoya has been retired since 2009 and has no desire to fight again. The potential purse – one of the greatest fighters of all time coming out of retirement for Mayweather's final fight – would be insane and enticing to a lot of guys, but De La Hoya is probably doing just fine with Golden Boy Promotions.

As crazy as it sounds, he doesn't need it.

So that leaves Mayweather with two options: (1) Choose someone who will not create any interest and the just be satisfied with another $100 million pay day (that must suck), or (2) Swallow his pride, bump back his final fight to accommodate Manny Pacquiao's rehab schedule, and fight Pac-Man one more time.

Even though the general perception of the first fight was pretty negative, this one might actually sell even more because (1) Fans will expect Pacquiao to adjust his style to deal with Mayweather's running and want to see if it will work, and (2) It will be Mayweather's last fight and the final time the braggadocios fighter can be beaten. Who doesn't want to see this guy get his behind kicked?

Fans will pay for that.

Is Mayweather trolling fans? We can only hope so.

His ego and his greed will not allow him to wrap up his career against a nobody. He just has to figure out which somebody everyone will pay to watch that he can beat.