Everything You Need To Know From Week 17 In The NFL

Everything You Need To Know From Week 17 Of The NFL

We made it, everyone. Another NFL regular season in the books. And even though most of the playoff spots were locked up prior to any games being played this week, there was still plenty of action. In case you missed anything, here are the highlights from Week 17.

It makes sense that the closest games this week would involve teams totally out of the playoff picture. The Lions edged the Bears 24-20, the Niners beat the Rams 19-16, and the Colts (though they did have about a 1-in-3,326 chance to make the playoffs heading into Sunday, let's be real, that wasn't happening) topped the Titans 30-24. But perhaps the most entertaining comes as it so often has from the NFC East, a division absolutely devoid of defense. The offensive fireworks were again on full display in the Eagles 35-30 win over the Giants. DeMarco Murray's first post-Chip Kelly carry went for 54 yards and a score. Eli Manning and Sam Bradford each eclipsed 300 yards passing, including deep bombs to Zach Ertz for 60 yards, setting up a Darren Sproles touchdown, and to Rueben Randle, who hauled in a 45-yard touchdown grab. And we did even see some defense, as Manning fumbled in the red zone and Walter Thurmond brought it back 83 yards for a score. Great way to close out the season for two very disappointing franchises.

Two weeks ago, Pittsburgh was the team nobody wanted to face in the playoffs. One week ago, they were the team that blew their chance to make the playoffs. This week, they took care of business against the Browns, which is all they could do. And thanks to a Jets loss, the Steelers are back in the postseason, and even with that hiccup, they'll still be a dangerous team for anyone to face. Up first? Division foe Cincinnati Bengals. Pittsburgh has to like their chances against a franchise that is notorious for blowing their first-round playoff games, and likely won't have starter Andy Dalton back for this one.

A young buck named Peyton Manning stepped on the field this week after entrenched starter Brock Osweiler was benched for poor performance. And the upstart Manning did just enough to lead the Denver Broncos to the No. 1 seed in the AFC. He finished 5-for-9 for 69 yards, and led Denver to 20 points in about one and a half quarters, capped off by a touchdown run from Ronnie Hillman. With the Patriots losing, Denver will have homefield advantage throughout the playoffs.

The Panthers simply had to win to lock up the No. 1 seed, and they did that in style, crushing the Bucs 38-10. Cam Newton threw 293 yards and two touchdowns on 21 of 26 passing, ran for two more scores, and another Cam(eron), Artis-Payne, scored his first career touchdown in the rout. Thomas Davis and Robert McClain each snagged an interception, as well. Shout out to Tampa Bay's Lavonte David, who ended an impressive season with 12 tackles, a sack, and two fumble recoveries.

Yes, the Colts did have that 3,326-to-1 shot at winning the AFC South, but the Texans ended any chance of that when they beat the Jaguars 30-6. This Texans team gave up 40+ points in the first half in two separate games, but they have absolutely buckled down defensively, and it was on full display here, forcing four Jacksonville turnovers and sacking Blake Bortles eight times. Houston is doing enough on the offensive end to stay competitive. If they can limit offensive mistakes and short drives in the playoffs, they could be a very pesky thorn in someone's side.

Speaking of teams that'll be pesky in the postseason, the Kansas City Chiefs quietly ended the season on a 10-game winning streak. And they'll be the Texans' first round opponent in the playoffs. Imagine that. They have a defensive Rookie of the Year candidate in CB Marcus Peters, and the return of Eric Berry from Hodgkin lymphoma has helped bolster the secondary. Tamba Hali and Justin Houston have kept things rolling upfront defensively, and it cannot be understated how good Alex Smith is at avoiding turnovers. He had a nine-game stretch without throwing an interception, and only tossed five the entire year. 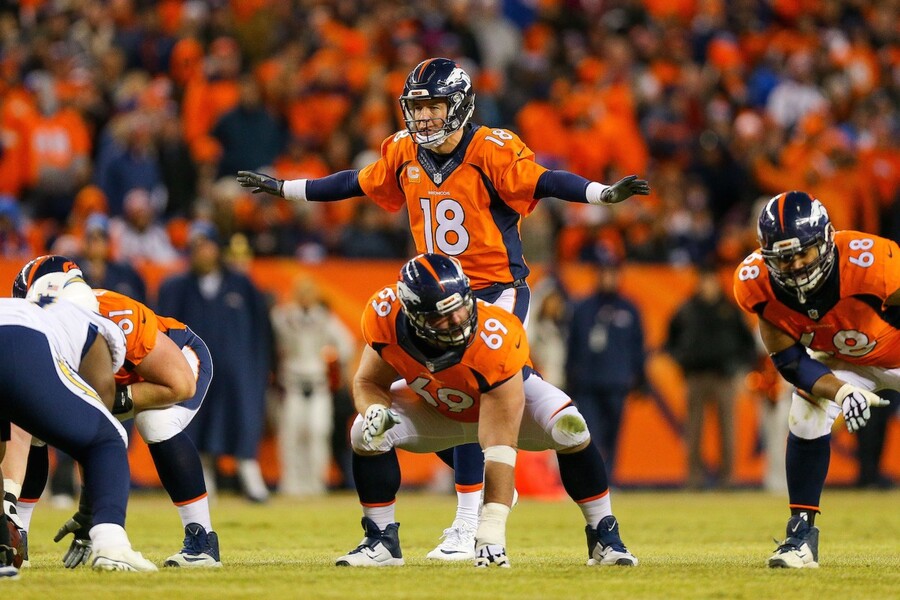 How quickly fortunes change in the NFL. Last week, the Jets upset the Patriots in a wild overtime game, and simply needed to win this week against the Bills to make the playoffs. And for the second time this season, they couldn't beat Rex Ryan, their old coach. The Jets never led, and their final three drives ended in interceptions, including one in the end zone. Ryan Fitzpatrick was an uneven 16-for-37 for 181 yards, two touchdowns and the three picks. Despite a 10-win season, the Jets will be on their couches next week, watching the playoffs from home. Or maybe they won't be watching it all. I'm not sure of their plans. The point is, they won't actually be playing.

For the second straight week, there was a confusing game plan from the Patriots. This time they didn't elect to kick after winning the overtime coin toss, but they did choose to play their starters…kind of. Had the Patriots won, they would have clinched home field advantage throughout the playoffs. Even with a loss, they needed the Broncos to win to drop from #1 to #2 (granted, that ended up happening, but the Patriots played earlier in the day). I'm totally okay with committing to the starters and going for the win. I'm also fine with throwing in your backups and getting your starters some extra rest. But the Patriots had an odd hybrid of playing their starters, but not utilizing them to their full capacity. Tom Brady only dropped back 21 times, perhaps in an effort to avoid injury. But thanks to a handful of heavy hits, including three on one drive, Brady got dinged up, citing a "very sore" ankle after the game. He'll still have an extra week to heal up, but why expose him to extra punishment if you're not going to go full-throttle against a very beatable Miami team?

Clock management woes have existed for Mike McCarthy since he's entered the league. And again on Week 17, they were on full display. The Packers faced a third-and-goal, needing a touchdown to tie the game. Aaron Rodgers threw an incompletion, bringing up fourth down. And the offense simply froze. You need to know what you're going to do in that situation, and it seemed like McCarthy didn't. The result? The Packers had to blow a timeout to avoid a delay of game. Rodgers threw an ill-advised interception on the next play, and when they got the ball back after a Minnesota punt, they only had 58 seconds to try and tie things up.

The Vikings are lucky Green Bay didn't capitalize, but they lost a fumble on a kickoff return and fumbled on their next offensive possession with a botched exchange between Teddy Bridgewater and Adrian Peterson. Marcus Sherels also fumbled earlier in the game. Those 50/50 balls won't always go Minnesota's way in the playoffs.

All Johnny Manziel had to do over the last month and a half of the regular season was stay out of trouble and continue to show flashes of excellence. At best, he'd come into next year the frontrunner for the Browns quarterback position, and at worst, he'd end up on another team with a shot at cracking the starting job. But Manziel could not stay out of trouble, partying during the team's bye week (and videotaping it), and then skipping a concussion check-in with team officials before Cleveland's loss to the Steelers. That's enough for sources to say they're "so done" with Manziel, and will likely select a quarterback with the second pick in April's NFL Draft. In perhaps the least surprising news from the entire year, word around the league is that the Dallas Cowboys might be interested in acquiring Manziel. But if that ends up not happening, Manziel will likely find himself without a team in 2016. His numbers just haven't been good enough and his off-field antics have been so plentiful that teams don't want to take a chance on him. Had Manziel not damaged his off-field reputation even further, he could have had a few more chances to shine.

The Chargers forced four Broncos turnovers in the first half, but only turned them into three points.

Tom Brady failed to throw a touchdown pass for the first time all season.

This was the first time since Week 4 that three teams recorded at least six sacks. The Texans (eight), Steelers (seven) and Chiefs (six) all accomplished that feat.

Adrian Peterson is only the third player to lead the league in rushing after turning 30 years old.

Five of the 12 playoff teams are outside the top 12 in points per game. The Texans are the worst at 21.2 per contest, good for tied for 21st.

Predictions For The Divisional Round of the Playoffs

Boy, what a dreadful job of picking this season. There's really no other way to put it. Let's just be glad handicapping games isn't my day job. I would say that my postseason track record is usually better, but in those years I've also had good regular seasons, so take that as you will. Enjoy the playoffs.

Houston prides itself on putting pressure on the quarterback. Alex Smith is unheralded as a scrambler, but he's proven to be quite evasive at avoiding oncoming rushers, and if they do get to him, he's much more comfortable taking a sack than trying to force something. If they can't create turnovers, I don't think Houston can win this game.

Even if Andy Dalton was playing in this game, I don't see Pittsburgh losing. They're just at a different level right now.

I still cannot get a read on the Vikings. My best guess is that they're able to fairly easily handle above average to bad teams, but they struggle against top opposition. Seattle confirmed on Sunday that if they're not playing the Rams, they're tough to beat. The fact that the Seahawks already went into Minnesota and won 38-7 earlier this year helps, too. I don't think it's as big a blowout, but a 10 to 14 point victory wouldn't surprise me.

This might be nuts, but Washington has been tremendous at home this year. And Green Bay has looked shaky all season. Sunday night only furthered my distrust in them, which naturally means they'll go out and win by 40 here.