Well, one week of playoffs are in the books. We started with a blowout, but the other three games had a fair amount of intrigue, and a spectacular amount of teams making mistakes in crucial moments. In case you missed any of the action, here are the highlights from the first round of the postseason.

The Steelers leapt out to a 15-0 lead over the Bengals, gave up 16 straight points, and then scored the final three in easily the wackiest game of the round. This game featured injuries, scuffles, turnovers, ill-advised penalties, and occasional bouts of great offense. Martavis Bryant made a twisting touchdown catch early, and A.J. Green "Mossed" a pair of helpless Pittsburgh defenders. In the end, two unsportsmanlike conduct penalties did Cincinnati in, and the Steelers survive to play another week.

Knile Davis was the man in Kansas City last year for a few games when Jamaal Charles went down with an injury. This year, he had to make his mark on special teams, and boy, did he start things off on the right foot. He took the opening kick back 106 yards against the Texans, setting the tone for the Chiefs' dominating 30-0 victory. And credit everyone blocking for him, too. He barely had to make a move to get wide open, a sign that the blocks were well executed.

Kansas City's defense also deserves some praise for making Brian Hoyer look like a JV high school quarterback. They forced five turnovers (by five different players), three sacks, and Josh Mauga's interception in the end zone stopped Houston's best chance to put points on the board. It was a dominating performance, and unlike the Chiefs' last trip to the postseason, they kept their foot on the gas for all four quarters.

Green Bay's first four drives featured 13 plays that gained seven yards. Fortunately, they woke up. Shaking off an incredibly sluggish start, the Packers, who hadn't looked strong offensively in about half a season, rattled off 35 points in a 35-18 victory over Washington. Aaron Rodgers had a modest stat line (21-of-36 for 210 yards and two touchdowns), but Green Bay won this game by controlling things on the ground. Eddie Lacy and James Starks combined for 116 yards and two scores, and as a team, the Packers averaged 4.4 yards a carry. Not great numbers, but very reassuring for a team that has been inconsistent in the run game.

Russell Wilson and the Seahawks offense looked like they wanted nothing more than to get out of the frigid Minnesota temperatures and just find a beach somewhere. And with 13 minutes left in the fourth quarter, center Patrick Lewis quite literally nearly threw the game away. He snapped before Wilson was ready, and the ball sailed over his head, all the way to near midfield. Wilson never let up, though, and even though he dropped to the ground and had to avoid five defenders, he did what he does best: improvise, and he found a wide open Tyler Lockette, who took the ball all the way to the Vikings' 4-yard line. The Seahawks scored the game's only touchdown two plays later.

It's a pleasure to watch Antonio Brown play football. He caught seven passes for 119 yards, and every time he catches the ball, nobody would be surprised if he Madden Sticks his way to a score. Let's hope he passes concussion protocol this week and will be good to go against the Broncos. 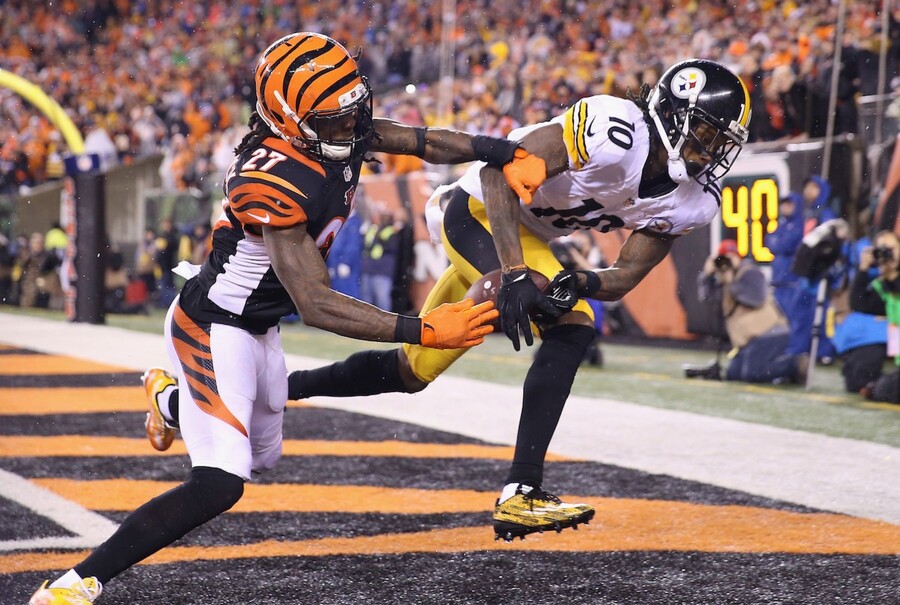 What a terrible string of events for the Bengals. First, Jeremy Hill, who's had ball security issues all year, fumbled on the first play of Cincinnati's drive after an interception. Since it was the first play, the Steelers didn't need to use any of their timeouts, which certainly came in handy later. On the ensuing Steelers drive, the Bengals were facing a clearly hobbled Ben Roethlisberger, who could barely throw the ball. Vontaze Burfict already has a reputation for being a dirty player. And he delivered a head-to-head hit on Antonio Brown, who was a defenseless receiver on a pass across the middle. Burfict tried to argue that he led with his shoulder, but the way he launched himself is a penalty regardless. To make matters worse, Pacman Jones had a REALLY dumb unsportsmanlike conduct penalty, putting the Steelers in easy field goal range. An incomplete pass turned into 30 additional yards and the win for Pittsburgh. Yes, there were similar calls earlier in the game that probably should have been made against the Steelers, and yes, emotions were running high–Steelers assistant coach Mike Munchak received an unsportsmanlike conduct penalty for pulling the hair of Bengals safety Reggie Nelson. But cooler heads must prevail. This was an awful way to lose, and it was totally preventable.

From one fumbling running back to another, Adrian Peterson let go of the ball at the worst possible time. Peterson quietly had seven fumbles this year, though he only lost three of them. Fumble number eight was not as lucky. He caught a short pass and then had the ball ripped away by Kam Chancellor. That led to the eventual game-winning field goal. Chancellor nearly became the goat himself later in the game, when he was flagged for a 19-yard pass interference penalty and beaten for a 24-yard completion on the Vikings' final drive. It put Minnesota in very nice field position, though Blair Walsh hooked a seemingly chip shot 27-yard field goal, and Seattle held on for the win. Before Sunday, Blair Walsh had only missed one kick on 34 career attempts from inside 30 yards. Peterson, this year's leading rusher, managed just 45 yards on 23 carries.

Yikes, Houston. Their first home postseason loss in franchise history wasn't pretty. Hoyer had the worst game of his career, going 15-for-34 for 136 yards with four interceptions and a lost fumble. One of the picks was at the Kansas City 3-yard line, and took out any remaining air in the stadium. The defense is generally pretty consistent, but the Texans need to find a quarterback soon, or they're doomed to flounder in mediocrity for a long time to come.

Washington played a great game for about two-and-a-half quarters, but simply didn't close things out. In a game where time of possession was nearly split 50/50, Washington's final five possessions either ended with punts or a turnover on downs. Head coach Jay Gruden said after the game the team didn't make plays, and with less than five yards per play on those five possessions, it's hard to disagree with him. Washington didn't beat a team with a winning record all season–and they were simply defeated by superior competition.

I know it's a small contingent and not reflective of everyone in Cincinnati, but some Bengals fans cheered when Ben Roethlisberger got hurt earlier in the game and threw debris on the field when their team blew it at the end. Hopefully they don't point the finger at the team's players, because they displayed quite the lack of class themselves.

Five Fun Facts From The Wild Card Round

Knile Davis had more yards on his kick return touchdown (106) than he did rushing all year (72).

Since the merger, 45 playoff teams have entered the final 15 minutes of a game without scoring. 43 of them lost–the Seahawks are one of two exceptions.

The Bengals haven't won their past eight trips to the postseason. The Chiefs won in the playoffs for the first time since 1994.

The three leading rushers this round were Alfred Blue, Christine Michael and Spencer Ware. Hope you played the Powerball if you predicted that at the beginning of the season–clearly you have some good luck attached to you.

Predictions For Next Week

It started so well with that Kansas City victory. Then everything fell apart as it has so many times this season. The Steelers and Seahawks both won but didn't cover, and the Packers shook off that early deficit to win quite easily. Maybe next week will be better.

Remember, we're just a season removed from the Chiefs pasting the Patriots. Yes, that was the regular season, but scorching hot Kansas City should be able to keep things close with banged-up New England.

I don't predict a huge blowout like when these teams met earlier in the season, but Arizona is a far superior team here. A 10 to 14 point victory isn't unreasonable.

You know the Seahawks will be mad about losing to the Panthers at home earlier this season. Carolina's had a number of close calls, and it seems like the Seahawks cannot play a playoff game that's decided by more than one possession. I like the chances this game is close.

Roethlisberger is hobbled, and Antonio Brown might be out with a concussion. I'm hoping they both play with this pick. The Broncos dominated the first half of the regular season meeting before losing by seven. With home field advantage, things should be a bit different this time around, but I'm betting on the Steelers to hang around all game. After all, Peyton Manning hasn't exactly been turnover-free, and Pittsburgh's D makes a living on poaching turnovers.