Everything You Need To Know From The NFL Conference Championships

Super Bowl 50 is set. The Denver Broncos and Carolina Panthers are squaring off to determine our newest champion. They got there in very different ways, though. In case you missed any of the action, we've got you covered.

Everything Carolina did on offense was like a child devouring a cake: entirely effortless. Cam and Co. put up 476 yards en route to a 49-15 stomping of the Cardinals. The unheralded receivers stepped up in a big way, too. Corey Brown had four catches for 113 yards, including an 86-yard bomb where he broke away for a defender and ran in easily for a score. And Ted Ginn Jr. only had two catches, but he took a 22-yard reverse all the way to the house, darting through the Arizona secondary as if he were a pinball.

Of course, it helped that the defense forced seven turnovers, too. And the one time Newton threw an interception, the Panthers D immediately got a pick of their own, stopping a potential Cardinals comeback. Yes, hard as it is to believe, this game was close at one point. Luke Kuechly had a pick six, a fumble recovery, and led the team with eight tackles. Carson Palmer never got comfortable with the Carolina defensive line in his face all game.

Speaking of defenses that dominated, Denver fans can thank the team's terrific pass rush for helping the Broncos reach the Super Bowl. Von Miller somehow seemed to be at five different places on the field at once, and was Tom Brady's worst nightmare throughout the game. Miller finished with 2.5 sacks and numerous other hits. He wasn't alone, though. Derek Wolfe got a sack and was in Brady's face all game. DeMarcus Ware might have had the best two-tackle game in history. All that pressure led to both of Brady's interceptions, which were picked off by Darian Stewart and, who else? Miller. Bradley Roby also had an interception off a tipped pass on a two-point conversion, again thanks to stellar upfront play from the Broncos D. It's going to be really interesting seeing how that defense fares against a much more mobile quarterback than Brady.

Tight ends put on a touchdown clinic on Sunday. You figured Rob Gronkowski would go off, and he did, securing eight catches for 144 yards and a touchdown. A handful of his grabs came in incredibly tight windows, and despite the loss, he further proved he's the best TE in the game. But his fellow tight ends didn't do too poorly, either. Owen Daniels only had two catches, but he made both of them count–33 yards, two scores, the latter of which came on third down after a beautiful corner route. Daniel Fells found the end zone (albeit in garbage time), and Greg Olsen racked up 113 yards on six catches. 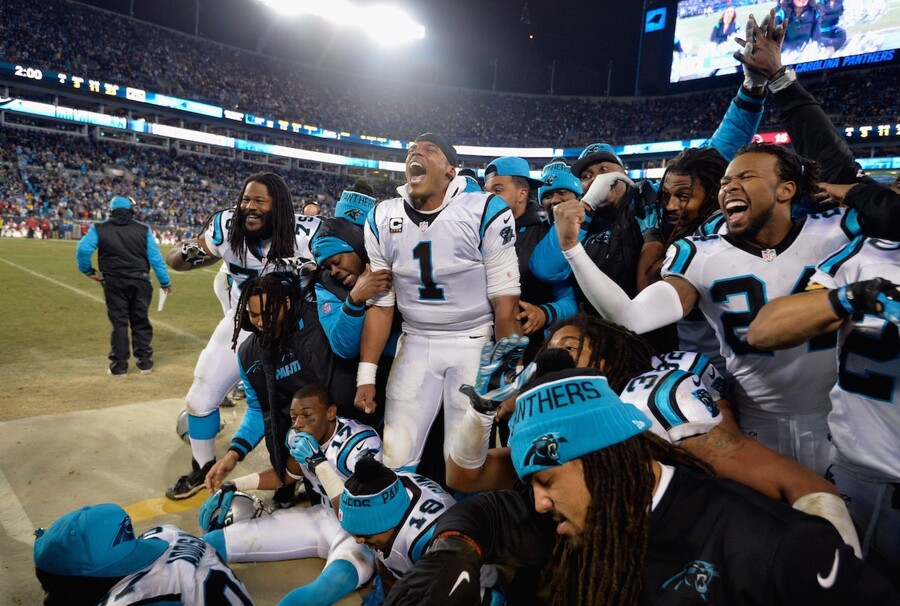 In a 2009 playoff game, Jake Delhomme had six turnovers against the Arizona Cardinals, and the Panthers got throttled. This time around, it was the Panthers doing the throttling to the poor opposing quarterback. That happened to be Carson Palmer, who picked a bad day to have a bad day. He threw four interceptions, one returned by Luke Kuechly for a touchdown, and also lost two fumbles. Things just got worse as the night went on. Palmer hurt his finger towards the end of the season and never really recovered. That's not an excuse, but it's a shame to see such poor quarterback play from a team that had championship aspirations.

Once again, the Patriots run game was nonexistent. You know things are bad when Tom Brady is the leading rusher with three carries for 13 yards. New England's actual running backs ran 14 times for just 31 yards. Against an opportunistic Denver defense, the lack of a run game finally came back to bite the Pats.

The Broncos could use a bump from their running game, as well, especially since they rely on it more than the Patriots do. Ronnie Hillman continues to run directly into the line, not able to get anything going. He finished with 16 yards on 11 carries, but his most glaring error was on a swing pass. He bobbled the pass, and when it fell in front of him, he threw his hands up in the air–and not in the good way, like many songs from the 90s suggested we do – while the ball bounced on the grass. New England's Jonathan Freeny scooped it up and returned it for a touchdown. The play was ruled an incomplete pass on the field, but after a Patriots challenge, it was reversed. The score didn't count, though New England had the ball in prime position and came away with their first touchdown of the game soon after. And it was completely avoidable if Hillman had just picked up the ball.

You can't pin the Patriots loss entirely on Stephen Gostkowski, but man, he picked a bad time to miss an extra point. He had made 523 PATs in a row, including 60 in the postseason, a streak that spanned NINE YEARS. The early miss forced New England to have to go for two at the end of the game, rather than just kicking an extra point to tie it up. Gostkowski did hit his two field goal attempts, and is just about as automatic a kicker as there is. This one's going to sting for a while, though.

During his postgame speech, Peyton Manning said the Broncos made the Super Bowl in two of their past four years. That's accurate, but so is saying they've made it twice in the past three years. Manning could have made his team sound even better. But… they're also going to the Super Bowl, so that's not really a major quibble. 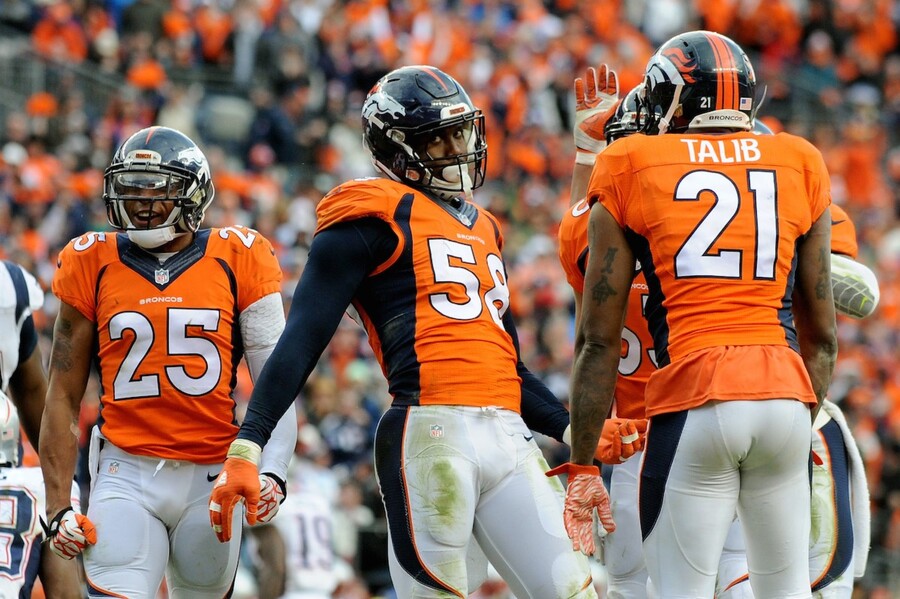 Predictions For The Super Bowl

As much of a storybook ending it'd be to see Peyton Manning ride off into the sunset with one more Super Bowl ring, Carolina is just playing way too well right now. If they jump out to another huge lead like they have against the Cardinals and the Seahawks, this Broncos team isn't really built to make a comeback. And against an immobile quarterback like Peyton Manning, that front seven of the Panthers should feast.

That's not all… let's throw out some other predictions! These are not official by any means, but let's see if they still happen.

Here's hoping for a great game. Enjoy the Super Bowl, everyone!