And then there were four. The divisional rounds of the playoffs are said and done, and with no game being decided by more than a possession, there was at least some intrigue in each matchup. In case you missed any of the action, here are the highlights:

The Saturday night contest between the Cardinals and Packers wins this one. Unlike the first time these two teams played this season, when Arizona won 38-8, this was a defensive battle, with plenty of huge moments. There were even some amazing plays that didn't count–Randall Cobb made an unbelievable one-handed catch that ultimately knocked him out of the game, but it was called back by a penalty. And Patrick Peterson had a 100-yard interception return for a touchdown, and THAT was negated by a penalty. Plus, Peterson taunted the last would-be tackler before he scored, so there's that, too.

As for the on-the-field action that did count, we had another Hail Mary from Aaron Rodgers with no time remaining, coin toss drama, and a catch and run by Larry Fitzgerald that all but sealed the game for Arizona on the first play of overtime. That was just in the final minute of game time. We also saw two terrific touchdown catches by Michael Floyd, one of which deflected off a Packers defender, and some intense pressure on both quarterbacks. It was an absolutely absurd game, and a blast to watch.

This was the week of the wide receiver. Larry Fitzgerald receives top billing for making catch after catch in the Cardinals win. He finished with 176 yards on eight catches, including that ridiculous run through the entire Packers defense that you've probably seen 387 times by now. But throughout the night, when the Cardinals needed a play, it was Fitzgerald they went to. He capped it off by catching a shovel pass for the game winner, and in large part thanks to his will to win, the Cardinals are in the NFC Championship Game.

Pittsburgh's Martavis "Don't Add An Extra Syllable To My First Name" Bryant had himself a ball game, as well. 154 yards on nine catches, plus another 40 on two rushes, equalled a huge day for the second-year receiver. Perhaps more importantly, he demonstrated that he could work all parts of the field, making some tough catches on the sideline and across the middle of the field. Of course, he's still faster than any human being probably should be, but he showed he's much more than just a deep threat.

A handful of receivers that saw limited playing time during the season also stepped up in big playoff situations (albeit all in losing efforts). Jason Avant had 69 yards on four catches, all of which seemed to either be in clutch situations or were just very difficult catches. Sammie Coates, who only had one grab all season, snagged two passes for 61 yards and showed some excellent after the catch work. Finally, Jeff Janis caught 145 of Aaron Rodgers' 261 passing yards, and had two touchdowns, including that briefly season-saving Hail Mary.

It's pretty remarkable how the Patriots can have absolutely no run game to speak of and still manage to win. The two longest runs were an 11-yard end around to Julian Edelman and a 10-yard scamper by Tom Brady that probably should have been a touchdown, though Brady was ruled down at the 1 after taking a pair of big hits. No matter, he called his own number on the next play and dove into the end zone for a score. The other two touchdowns went to Rob Gronkowski, and Gronk also secured the Chiefs' onside kick to seal the game. Credit New England's defense, too. After living through one of the weirdest off-the-field weeks the NFL has ever seen, Chandler Jones forced a Knile Davis fumble on the first Kansas City drive after halftime, and thanks to all the New England pressure, Alex Smith never got comfortable in the pocket, running around like a beheaded chicken on nearly every dropback.

He essentially sacked himself on a play, but realizing no one had touched him, Peyton Manning got up and fired a strike down the field to Emmanuel Sanders for 34 yards, his longest play of the game. Was he sliding? Did he just fall down? Did he need Life Alert? Nobody knows for sure, but it was some incredibly quick thinking on Manning's part. Though the Broncos ended up punting on that possession, Manning looked like his old self on their final drive, picking apart the Steelers defense with some precision passing and even crisper "Omaha!" yells. He even did a great job deflecting the "Manning vs. Brady" question he got postgame by quoting Bill Belichick, saying the team will celebrate this one tonight, then onto the Patriots on Wednesday. Smooth media savvy, Peyton. 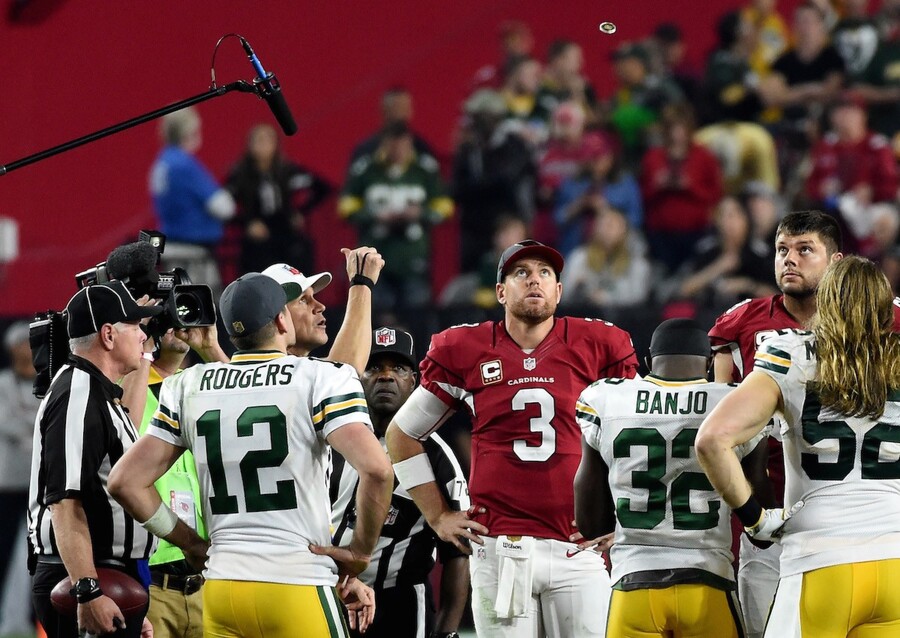 You know, end-of-game clock management shouldn't be so hard, but for whatever reason, some coaches just do not have it. Andy Reid has always had some difficulties in late-game situations, and his team executed their final drive like they were taking a casual stroll in the park, which would have been great if they were down only one score, but they weren't–they needed two touchdowns to tie things up. They ate up five minutes and 16 seconds on a 16-play drive, capped off by the Chiefs huddling on every play after the two-minute warning. Sure, a couple of those were incomplete passes, but it was par for the course–there was just no urgency at all. By the time the Chiefs kicked off, there was barely a minute left in the game. The blame isn't entirely on Reid, though he needs to do a better job instilling a sense of "let's get this done quickly, fellas" that simply wasn't there.

The worst part, is that Reid might have even been one-upped by Bruce Arians. After the Packers turned the ball over on downs, the Cardinals took over with 2:38 to play, and Green Bay only had one timeout remaining. If you play your cards correctly in that situation, you can get to the two-minute warning on third down, run another play up the middle to set up for a field goal, and be down to around 1:10 or 1:15 on the clock and up seven points. But Arians peculiarly called a passing play on second down, which resulted in an incomplete pass that stopped the clock. That gave the Packers an extra 40 to 45 seconds when they drove, and as you may have seen from that Hail Mary above, they used every single tick of the clock. It's not even that Arians' was nuts to call a pass play, but why are you calling one of the most difficult to complete plays (a corner fade) in all of football? The best case scenario is that Larry Fitzgerald catches the ball and gets pushed out of bounds. The worst is exactly what happened: the throw sails past the sideline and Aaron Rodgers gets more time to operate. Really questionable decision-making.

Boy, what a rough start for the Seattle Seahawks. They were down 14-0 before most people had even turned on their televisions, and it didn't get any better as they went into halftime down 31-0. Russell Wilson had two interceptions, one returned for a touchdown. The defense, which hadn't allowed a 100-yard rusher in 26 games, had given up 84 yards to Jonathan Stewart by halftime: he finished with 106. The Seahawks also weren't smart with their decision making near the end of the half. Facing 4th-and-5 from the Carolina 18, the Seahawks had a chance to kick a field goal to at least get some points on the board. They opted to go for it, and didn't get enough yardage for a first down. Then they chose to try a 55-yard field goal with four seconds left, which hooked right. It's hard to come back down 31-0 in any game, but particularly on the road. Though Seattle had a much better second half, it was too little, too late.

In big games, Antonio Brown typically fields punts for the Pittsburgh Steelers. But with him sidelined, the task fell to Markus Wheaton, who appeared to be doing his best impression of brick hands. He refused to call for a fair catch–one time it resulted in him getting tackled the ground immediately after catching it; another time it ended with him flat on his back and the ball bouncing away; a third time, Wheaton again could not hold onto the ball, and the ensuing scramble very nearly resulted in a touchdown for the Broncos, or at the very least, a safety. Fortunately for Wheaton, the Steelers retained possession in all three instances, but it was a really bad fill-in job fielding punts. Hopefully Brown gives him a few pointers in the offseason.

Head official Clete Blakeman had a rough go of it before overtime in the Green Bay/Arizona game. With the Packers calling heads, Blakeman flipped the coin up in the air, and… it didn't flip. It just landed straight down on the ground, heads still showing. There was chaos all over the field as Blakeman hastily picked the coin up and said "it didn't flip, it didn't flip" before flipping it a second time. Fortunately for probably every official ever, the second flip also landed on heads, and the Cardinals got the ball. The NFL has come out and said Blakeman made the right call, though there's nothing in the rules that states a coin must flip on the coin toss. Can you imagine the controversy we'd be talking about if the Packers had won the toss and scored a touchdown?

Five Fun Facts From The Divisional Round

The Steelers are the first team in NFL history to play a postseason game without both their top rusher and top receiver.

Kansas City has kicked 12 onside kicks since the last time they recovered one.

Tom Brady tied Peyton Manning as the all-time leaders in postseason games with 300 or more passing yards. They each have nine.

Carson Palmer is 36 years old. This was his first playoff win.

Jeff Janis had seven catches Saturday against the Cardinals. That's five more than he had the entire regular season.

Predictions For Next Week

Well…there really isn't much else I can say. I've been terrible picking games this year. The Cardinals had a push until they gave up Aaron Rodgers' second Hail Mary of the year (is it really that hard to defend?!). Meanwhile, the Steelers covered the entire game until they gave up a touchdown and two-point conversion with three minutes remaining. Thanks to a late field goal, they pushed, or else it would have been a complete oh-fer day. Is there a bounceback effort this week? Probably not, but let's try anyway!

The Patriots are finally looking healthy, and it's paying off in spades. Denver's defense needs to continue to play lights out to give the Broncos a chance. And it's safe to guess New England's offense would put up a bit more than the 16 points the Steelers did Sunday.

The general rule is that the home team will receive three points–that means Vegas thinks this game is a matchup between two equals. It'll be great to watch either way, but I think Carolina squeaks out a win, hopefully by four or more points.