Everything You Need To Know About Week 8 Of The NFL

Week 8 saw some of the most horrific injuries of the season so far, as a handful of big names went down. Le'Veon Bell, Steve Smith, Matt Forte… those were just a few that were knocked out of their respective games. Then there was Seattle's Ricardo Lockette, who actually WAS knocked out, and will have season-ending surgery to stabilize the ligaments in his neck. It was the scariest injury this season, for sure, and we are glad that it appears he'll eventually be okay, because it looked awful. For some less painful news, here are the other highlights of Week 8.

The New York Giants and New Orleans Saints did their best impression of a Big 12 college football game, putting up an astonishing 101 combined points. The defense was thrown out the window, literally: The two teams had 1,030 yards of total offense, and Drew Brees and Eli Manning combined to go 70-for-91 for 861 yards and 13 touchdowns. Odell Beckham Jr. had three receiving touchdowns, Brandin Cooks, Willie Snead and Dwayne Harris all had two. Oh, and the Saints tying score came with 36 seconds left, and they were set up for the game-winning field goal thanks to a face mask call on Giants punter Brad Wing. Kai Forbath, who signed just days earlier, kicked a 50-yarder as time expired to clinch the victory. And to be fair, Trumaine McBride did play a little defense, returning a fumble for 63 yards after Dominique Rodgers-Cromartie made a jarring hit on Snead. But this was all offense, and it was thoroughly entertaining.

If the playoffs started today, the Raiders would be in the playoffs. I'll give you a second to flip your computer, phone, desk, or whatever other device you may be using in disbelief. They find themselves in this position after taking apart a Jets defense that had been solid all season. Derek Carr threw for 333 yards and four touchdowns, and Latavius Murray gashed a stout run defense, racking up 113 yards on 20 carries. There are certainly still holes in Oakland, but there are quite a few promising signs here, and in a wildly inconsistent AFC, the Raiders very well could end up making the postseason.

Remember back in Week 4, when kickers were missing seemingly simple kicks left and right, and everyone started believing the kicking game was going downhill in the NFL? Well, we can all relax, because not only has kicking accuracy improved greatly since then, but clutch kicking was back in full force this week. Outside of the aforementioned Kai Forbath, Minnesota's Blair Walsh and Baltimore's Justin Tucker both nailed game-winning field goals as time expired. The Bucs, Seahawks and Panthers also won thanks to late-game kicks from Connor Barth, Steven Hauschka and Graham Gano, respectively. Kickers certainly take the brunt of the blame when they miss a potential game-winner or clincher, but these five all nailed their kicks when it mattered most.

The Kansas City Chiefs were channeling their inner Oprah in London: You get a rushing touchdown, YOU get a rushing touchdown, and YOU get a rushing touchdown. Oh yes, and you too! Alex Smith scampered for a score, as did Charcandrick West, Spencer Ware and De'Anthony Thomas, and Kansas City ran all over the Lions in a 45-10 victory. The Chiefs defense played the Broncos, Packers and Bengals in Weeks 2-4, and naturally struggled against the high-octane offenses. Since then, they haven't allowed more than 18 points in a game, and have done a much better job of applying pressure to the quarterback, forcing more sacks and knockdowns in the process.

If there was any doubt before, Sunday night confirmed it: the Broncos sport the best defense in the league. They harassed Aaron Rodgers into just 50 net passing yards, making him look uncomfortable all night before finally sacking him three times in the second half. The final sack probably should have been returned for a touchdown, but after the ball squirted all over the end zone, Denver had to settle for forcing a safety. The Broncos' defense has now scored in five of seven games this season. To further illustrate Denver's dominance, Demaryius Thomas had more yards on eight catches (168) than the Packers had all night on offense (140).

Julio Jones and Kwon Alexander are very fast men, and they had a back-and-forth of tremendous proportions in Tampa Bay's 23-20 victory. First, Jones caught a slant and ran downfield, but was chased down by Alexander, who simply ripped the ball out of Jones' hands. Later, after Alexander intercepted a pass and started returning the ball, Jones showcased his impressive speed by running about 100 yards through the other bodies on the field and eventually slammed Alexander to the turf. Jones is already among the elite wide receivers, and even as a rookie, Alexander has shown he's going to be a force for years to come at the linebacker position. 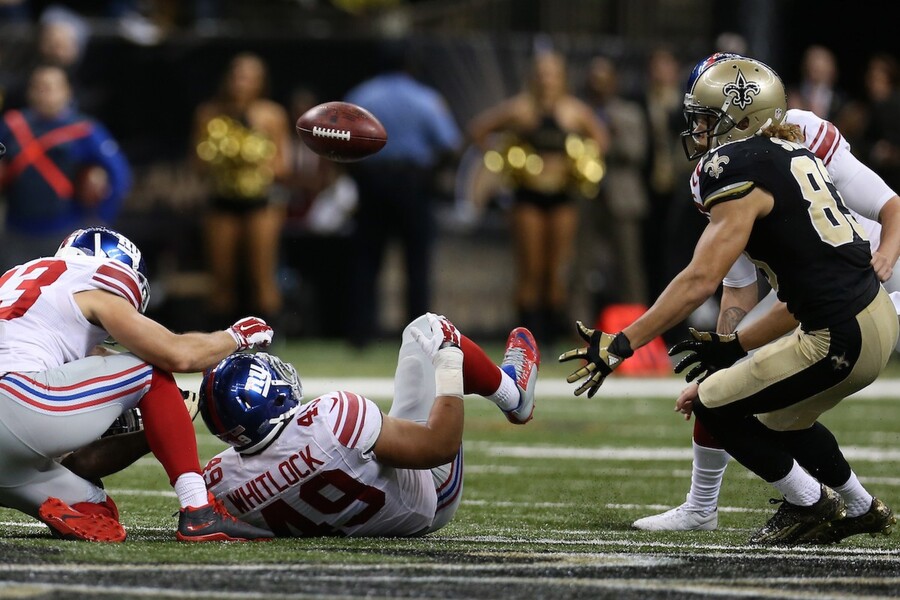 No one expected the Dallas offense to run smoothly with Tony Romo and Dez Bryant sidelined. But this was a new level of futility. Matt Cassel didn't even reach 100 yards passing, and even with Bryant's return, the offense was dreadful, managing just four field goals throughout the game. It spoiled a fantastic performance by the Cowboys defense in a very winnable game.

Jacksonville had a bye week, and they still might have turned in the best performance from the AFC South this week. A furious comeback attempt also notched the Colts a win, but they looked dreadful through the first 45 minutes of their loss to the Panthers. And even though the Texans won their game, receivers were dropping passes left and right, and the run game, which already was bad before Arian Foster tore his Achilles, was even worse without him. Luckily, they were playing the Titans, who trotted out Zach Mettenberger for the second straight game. He played poorly, though Bishop Sankey might earn the least valuable player award, fumbling on consecutive kickoff returns a week after losing his starting running back job.

San Francisco fans, you're about to get a healthy dose of Blaine Gabbert. The Niners just announced incumbent Colin Kaepernick is getting benched, and this last game was just another in a line of disappointing efforts all season long. Kaepernick completed fewer than half of his passes, averaging just under four yards per attempt. Several of his throws weren't even close to their targets, and though he led the team in rushing, he only reached 28 yards on the ground. We knew coming into the year this would be a rebuilding effort for San Francisco, but it's been especially brutal.

Last week, Josh McCown slipped on an exposed surface in the Rams' Edward Jones Dome and bashed his head into a wall, causing a concussion and ending his afternoon. This week, Reggie Bush tore his ACL on the same exposed surface. It's unlikely the St. Louis grounds crew is trying to hurt anyone, but letting this happen once is bad enough. Twice just seems like gross negligence.

Bill Vinovich's crew did a pretty solid job on Monday night, but there was one absolutely egregious call towards the end of the game. With no timeouts left and the clawing to get into field goal range, Andrew Luck completed a pass to Griff Whalen, who was tackled in bounds. Only the official along the sideline said Whalen got out of bounds. It looked like he didn't during the live feed, and it especially looked like he didn't on the replay. The worst part was that the official was just a couple of feet away, staring right at the play. The clock stopped with 31 seconds left, whereas if the correct call had been made, the Colts would have been facing third-and-3 with a running clock. It was all a moot point in the end, as the Panthers still won in overtime, but Indy had several cracks at the end zone when they really probably should have only had two plays, tops. Thankfully, it didn't decide the game, and Carolina is now 7-0.

Greg Hardy recorded his first interception of his career on a really nice tipped ball in the third quarter of the Cowboys' loss to the Seahawks. It was Dallas's first takeaway since Week 2.

The Saints scored more points than eight other games had in total.

Eli Manning is the first quarterback since 1960 to throw six touchdowns and zero interceptions while his team still lost its game.

Carson Palmer threw four touchdown passes for the second time this season. He's the first Arizona quarterback to ever do that.

Charles Woodson picked off his fifth pass this year, giving him the league lead in interceptions. Remember, he's the oldest defensive player in the NFL, and won the Heisman Trophy in 1997. And he's LEADING EVERYONE ELSE IN THE LEAGUE in interceptions. Amazing.

Another week, another terrible job of picking games. The Cardinals are once again a team that covers, particularly on the road, but everyone else not only didn't win, they got blown out. Just another reminder that no picks are safe in the NFL. Except maybe the Patriots. They're pretty good.

So good, in fact, that I'm going to be incredibly dumb and pick them to cover an absurd two-touchdown spread. They've had 10 days to prepare. And yes, I know Washington has had two weeks to get ready for this game, but I don't think it matters. The Patriots are too good.

I don't trust the Browns any farther than I can throw them, but this is the first we're getting of primetime Andy Dalton this season. He tends to struggle in those settings, and if you recall when the Browns visited the Bengals on Thursday night last year, Dalton played one of the worst possible games you can play at the quarterback position, throwing three picks and mustering an anemic 86 yards. I still think the Bengals win this game, but 10 points seems awfully high.

Minnesota has jumped out to a 5-2 record, but they've been deceptively mediocre on both offense and defense. They've also benefitted from playing an absurdly easy schedule. The Rams have done well in the underdog role the past couple of seasons, and with Todd "insert overwhelmingly positive nickname here" Gurley leading the attack, they should do just fine.

The Packers looked shaky as could be against the Broncos, but chalk that up to the tremendous level Denver's defense is playing at right now. Carolina is still solid, though they're no Denver. And do you really want to bet against Aaron Rodgers having two bad weeks in a row?

This should be a fairly high-scoring game, and it's really hard to trust San Diego's defense with anything more than a field goal right now. The Chargers will likely be without Keenan Allen, as well, which only hurts their chances of winning by a lot. Chicago's also been competitive since Jay Cutler returned to action after an early-season injury.