Everything You Need To Know From Week 6 Of The NFL

Now that six weeks have gone by in the NFL, we have a pretty good idea of who the teams are. Those who were good early have continued to shine, while those who have been bad have, well, not done much to get better. And the last winless team finally won, so the 2008 Detroit Lions can rest easy knowing that the 2015 Detroit Lions won't equal their 0-16 mark of futility. Let's take a look at some of the highlights.

In a complete 180 from last week, there were very few games that were actually competitive and fun to watch throughout. It was fun watching Philip Rivers chuck the ball all over Lambeau, but we're going with a game that saw BOTH quarterbacks flinging it around without a care in the world: the Lions and Bears. This had the bonus of seeing the Lions celebrate winning their first game with the kind of excitement a small child has in unwrapping a present they've wanted for years. But the onfield action was full of good stuff, too: Matthew Stafford and Jay Cutler combined to throw for 758 yards and five touchdowns, Alshon Jeffery returned and hauled in eight catches for 147 yards and a touchdown, and this game had three scores in the final minute, including a go-ahead touchdown by the Lions with 21 seconds left, and a tying field goal as time expired for the Bears. Then in overtime, we nearly saw our first tie of the year before Matt Prater buried one from 27 yards out for a 37-34 win. We also got to witness another "is this a catch" edition, which will be covered more in depth later on. Spoiler alert: the NFL still doesn't know how to define a catch.

Michael Vick had only thrown for six yards on three completions before going out with an injury in the third quarter. So the Steelers had to turn to… Landry Jones?! Believe it or not, the product of Oklahoma was a big reason Pittsburgh knocked off the Cardinals. Jones went 8-for-12 for 168 yards and two scores. Six of those passes, 137 of the yards, and both scores went to Martavis Bryant, who was playing in his first game since coming back from a suspension. It was a redemption story for the ages, and will surely be turned into a straight-to-DVD movie within the next couple of years.

The Dolphins were so bad in London that they left their coach there. Well, not really, but they did fire defensive coordinator Kevin Coyle and head coach Joe Philbin. Philbin's replacement, Dan Campbell, immediately injected some life into a team that has been listless all season. The result was Miami's most complete effort by far, in a 38-10 rout of the Titans: Ryan Tannehill only threw seven incompletions, Lamar Miller ran for 113 yards, Jarvis Landry scored on an end around, and Cameron Wake recorded FOUR sacks and two forced fumbles, all in the first half. They're his first sacks on the season, so maybe this is the start of a breakout for him, and by extension, the rest of the Miami defense.

Denver is still undefeated, but you really have to question how many more games they can win like this. Once again, the defense pulled them out of a tight rut. Aqib Talib had his second pick six of the season, and when Peyton Manning turned the ball over in Denver territory, the Broncos D stood firm, forcing an incompletion before two sacks of Josh McCown knocked the Browns out of field goal range. On the day, the Broncos brought McCown down four times, and caused three turnovers. They haven't convincingly won a game yet, but they're 6-0 and running away with the AFC West.

Steve Smith Sr. must have some sort of deal with the devil, because there is no way he should be doing what he's doing at age 35, let alone with BROKEN BONES in his back. He finished with seven catches, 137 yards, and a touchdown that pretty much defied every rule of reasonable logic. It's an absolute shame that he's wasting his final season in Baltimore. There's still time to trade him, Ravens. Make it happen!

DeAndre Hopkins had 15+ targets for the third time this year, and leads all wide receivers with 90 on the season. At this pace, he'll have 240 targets and 139 catches. His catch radius might be better than any other player in the league. Case in point: he literally caught a ball by smacking it against his helmet as he fell out of bounds. Absurd. 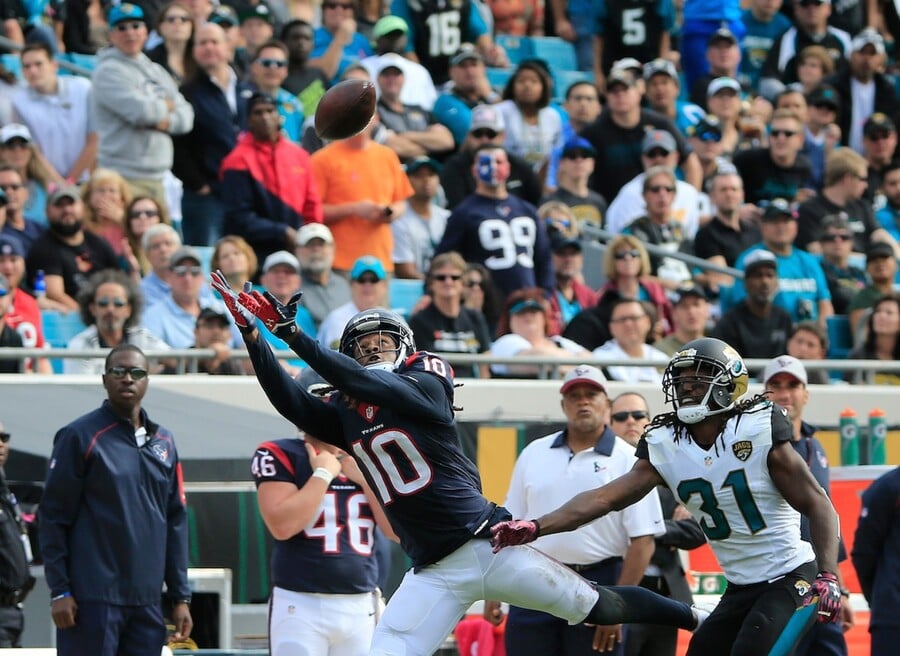 The Colts played the Patriots for the first time since subjecting the world to Deflategate, and it was a much closer game than we've come to expect when these two teams face off. In fact, it was a six-point game when the Colts found themselves facing 4th and 3 from their own 37-yard line. Common sense would tell you to punt in that situation. That's what the Colts lined up to do, but then nine players ran to the right side of the field, leaving just WR Griff Whalen snapping the ball to the appropriately-named safety Colt Anderson, with four Patriots staring down the poor "quarterback." Apparently the play was just a ploy to try to draw the Patriots offsides, but when Whalen actually snapped the ball, things went about as well as you'd expect. When New England took the ball over on downs, they marched down the field and scored what proved to be the winning touchdown. Ouch.

The Seahawks blew yet another winnable game, this time against the Panthers. With under a minute remaining, Earl Thomas and Richard Sherman got mixed up on their signals, and left Carolina tight end Greg Olsen wide open to run up the middle of the field for a touchdown. It's probably one of the easiest game-winning touchdowns you'll ever see. Seattle is one miracle forced fumble and incorrectly-enforced rule away from being 1-5. And the craziest part is that they're still just two games out of first place and still have two to play against the division-leading Cardinals.

Mike McCoy's play-calling at the end of the Chargers game against the Packers was confusing, at best. Trying to tie the game in a first-and-goal-to-go situation, and with a sizzling quarterback breaking all kinds of records, the Chargers opted to go with inside handoffs to diminutive third down back Danny Woodhead. TWICE. Antonio Gates, who the Packers were having difficulty covering all game, wasn't targeted. And on the crucial fourth down, Rivers had to throw a fade to, again, Woodhead. He is not outjumping anyone. The questionable play-calling cost the Chargers scoring a tying touchdown and possibly winning in overtime against a very good Green Bay team.

The NFL rulebook is a confusing behemoth, but something has to be done about this "what is a catch?" conversation that doesn't seem to have a legitimate answer. We've seen plenty of plays where a player appears to drop a pass and it's ruled a fumble, or he appears to make a catch and move before getting hit and it's ruled incomplete. Or sometimes he just makes a catch and it's not called a catch. It's very confusing, and Sunday did the league no favors. Near the end of the first half, Golden Tate caught a pass on a slant pattern running into the end zone. He was hit as he caught it, and the ball popped out of his hands and was intercepted by the Bears. Three different people during this game gave their opinion, and none of them were the same: Fox's rules expert Mike Pereira was insistent it was an interception, head official Walt Coleman ruled it a touchdown, but didn't really have an explanation as to why, and the NFL's VP of Officiating, Dean Blandino, said this was clearly a catch. When three different people can't clearly define one of the most basic parts of a football game, that's kind of a problem.

Speaking of problems, NFL Network's coverage was a little lacking after the Bengals/Bills game. Key word being "coverage." The network interviewed Bengals cornerback Adam Jones, but most viewers probably missed what Jones had to say, as the interview took place in the locker room, with multiple Bengals getting undressed behind him. Streakers have been a part of NFL games for years, but the broadcasts usually opt out of showing that. The NFL Network seemed to have a different agenda today.

Philip Rivers went 43-65 for 503 yards, setting San Diego franchise records for completions, pass attempts and yards. He was also the first quarterback in NFL history to throw for 500+ yards and zero interceptions and lose.

This is the fourth time the Seahawks have had a lead in the fourth quarter this season and lost.

Every single game the Ravens have played this year has been decided by six points or fewer.

This was the first time all year that more than one receiver caught a pass of 70 or more yards. Three guys did it: Martavis Bryant (88), Emmanuel Sanders (75) and Torrey Smith (72). All three went for touchdowns.

Well, it was only a matter of time. After the Browns covered, things were looking up. Then everything went downhill. Teams were losing left and right; the Patriots almost covered the 7.5-point spread, but alas, a garbage-time Colts touchdown threw all hope out the window. Oh well, onto the next week!

Okay, I'm finally on the Steelers bandwagon. Even if Big Ben doesn't return this week, the upgrade at QB with Landry Jones should be enough to knock off a Chiefs team that looks absolutely lost without Jamaal Charles.

This is one of those games that just makes everyone involved feel awful. And this is pretty much going off the trend of Washington playing a good game every other outing. They weren't great against the Jets, so I expect a bounce back against a far worse team. We'll see how disappointing this game is. Just hope you don't have to watch any of it.

Atlanta was exposed against the Saints, but I think with a longer week, they'll have some time to rest up and right the ship. They've also remained healthier than just about any other team in the league, and that includes the Titans. I don't think Tennessee is as bad as they showed against the Dolphins, but I do think they lose this one fairly convincingly.

I believe this very same spread happened in reverse when these two teams played in Minnesota. I took the Lions -3 then, but this time I think they're playing better football than the Vikings. Of course, Detroit has let me down in every single game this year, so… expect a Vikings blowout.

Arizona did a lot of shooting themselves in the foot in their loss to the Steelers, committing 11 penalties, including two stupid unnecessary roughness ones. But not to fear: they've absolutely destroyed the four bad teams they've played. And yes, the Ravens are a bad team.