Everything You Need To Know From Week 5 Of The NFL

Now we're talking! After a sloppy first month of the season, teams are starting to put it together and we're seeing some entertaining football out on the field. Well, for the most part. We still have the Lions. Here are the highlights from Week 5.

Take your pick, really. Going back to Thursday night's Colts and Texans game, seven of the first nine games played this week were decided by a touchdown or less. Three games went into overtime, and two others ended in one-point victories for the road team. But it may have been Sunday night that was the most exciting – after a paltry offensive first half, the San Francisco 49ers suddenly looked like a viable football team again. Colin Kaepernick and Carlos Hyde ran wild, and Hyde scored the go-ahead touchdown with 1:49 left. But with all three timeouts remaining, that was plenty of time for Eli Manning, who threw a career-high 54 times for 441 yards and three touchdowns, the final one coming to Larry Donnell with six seconds left. Donnell made a beautiful catch, reaching over linebacker Navarro Bowman in the back of the end zone, tapping both feet down and avoiding multiple Niners who were swatting at the ball. Perhaps the most impressive part of the drive was that for the majority of it, the Giants were without their top two wideouts, Odell Beckham Jr. and Reuben Randle.

They looked pretty pathetic on offense, but the Falcons did what they needed to do and escaped with a 25-19 win over the Redskins. Devonta Freeman continued his recent hot streak, finishing with 197 yards from scrimmage and a touchdown. He almost had a second score, but fumbled near the goal line. Fortunately for him, his teammate Julio Jones was right there to dive on the loose ball in the end zone for a touchdown. And after struggling throughout the first four weeks of the year, Robert Alford finally got his redemption, picking of Kirk Cousins' pass in overtime and returning it 59 yards for the game-winning score. The Falcons have four fourth-quarter comebacks through the first five games of the season, the first team in NFL history to do so. And they're 4-0 against the NFC East. Maybe they can win that division, too?

They haven't looked good doing it, but the Bears have pulled off fourth-quarter comebacks in two straight weeks. Jay Cutler found Marquess Wilson for a score with 3:11 left, then made a smart check down to Matt Forte, who scampered in from seven yards out with just 23 ticks remaining on the clock. The Bears then kept the Chiefs from attempting a realistic field goal; Cairo Santos' 66-yard field goal was predictably short. The Bears won this one without their top two receivers, as well. Now they just need to work on their two-point conversions: they were 0-for-2 on their tries.

If you guessed before the season started that "Josh McCown to Gary Barnidge" would be one of the most reliable duos in the NFL, please let me know what tomorrow's winning lottery numbers are, because you clearly have some kind of psychic powers. After seeing a winnable game slip through their fingers last week, Cleveland fought back from a 12-point deficit to take the lead against division rival Baltimore before allowing a game-tying field goal. But in overtime, Browns kicker Travis Coons nailed his fourth field goal of the day to put the Browns on the winning end of a field goal attempt. McCown became the first QB in Browns history to throw for at least 300 yards in three consecutive games. He ended up with 457 passing yards, a franchise record. He also threw in a rushing touchdown for good measure, and avoided the failed John Elway helicopter leap that earned him a concussion in Week 1.

Cincinnati gave up 24 unanswered points to the Seahawks, and it looked like they'd fall from the ranks of the unbeaten. NOT ON ANDY DALTON'S WATCH. He led the Bengals on a trio of beautiful drives against Seattle's vaunted defense, the second of which featured him rushing straight up the gut for a touchdown. In overtime, Cincy briefly toyed with the idea of finishing in a tie, but with just under four minutes left, Mike Nugent nailed a field goal to send the fans home happy. It was Cincinnati's first victory after trailing by 17 in the fourth quarter since 2004. The Bengals had lost 27 previous times when they were down 17 in the fourth quarter. And if Dalton can keep playing like this, the rest of the team is good enough that they're a legitimate Super Bowl contender.

The Bills had absolutely no business winning their game, and yet, they somehow found a way. Tyrod Taylor orchestrated an 8-play, 80-yard drive that included a reception by him and finished with a pass to Chris Hogan. He also scrambled for 24 yards while facing a third-and-23 from his own 7-yard line, and led his team in rushing yards. On Tennessee's final drive, Stephon Gilmore intercepted Marcus Mariota on the first play to clinch the victory. 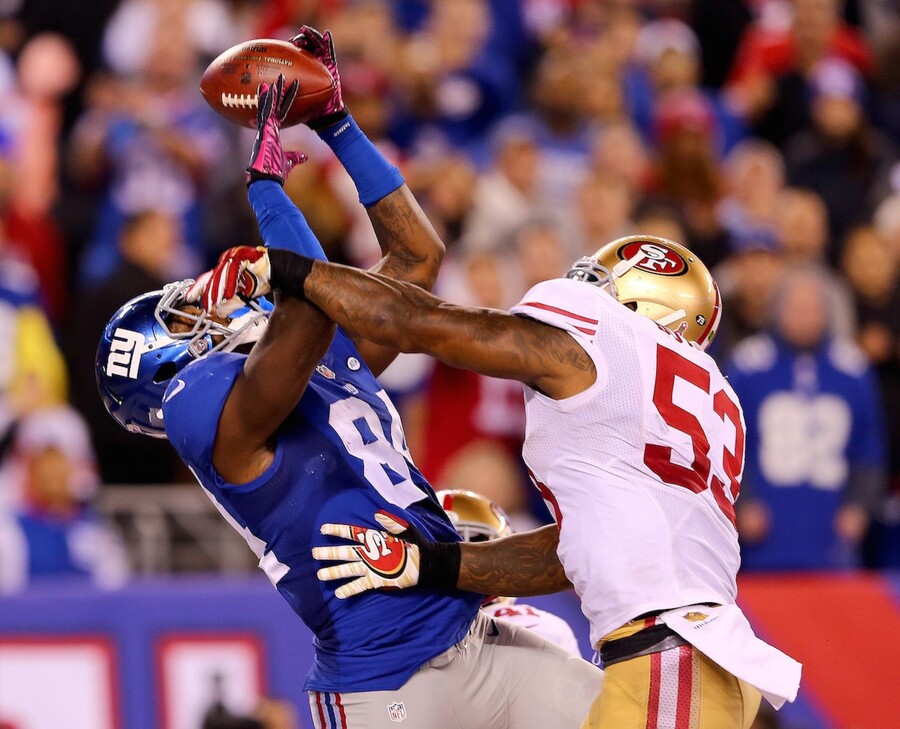 You know it's bad when there's a Dan Orlovsky sighting. And it's REALLY bad when Dan Orlovsky has to throw 38 passes in a game. But that's exactly what happened, as the Lions again looked pathetically lost in a 42-17 beatdown at the hands of the Cardinals. Matt Stafford was benched after things had already spiraled out of control, and the Lions finished with SIX turnovers. Their defense wasn't much better; Carson Palmer was an efficient 11-14 for 161 yards and three touchdowns, and Arizona averaged 7.5 yards per rush.

The Jaguars sure do seem to like shooting themselves in the foot. After missing two potential game-winning field goals last week, rookie Corey Grant fumbled the ball right in front of his own end zone, and the Bucs easily returned it for a touchdown. That was after three straight possessions that saw the Jags come away with points. There's a lot of talent on Jacksonville's roster, particularly at the skill positions, but they just can't seem to translate it into wins yet. The good news is that the core of their offensive roster is all first and second-year players. Maybe they all make another leap next year.

Drew Brees is making a valiant effort to play through a shoulder injury, but he's clearly not the top quarterback he's been over the past decade. He had three turnovers on Sunday, and was sacked five times, including twice where he fumbled. Some of his throws don't have the same zip as usual, either. On the other side of the ball, the Eagles' offense finally came together, but Sam Bradford threw two interceptions in the red zone. That won't cut it against better teams.

Coming into Week 5, Aaron Rodgers had an 82.3 QBR when facing pressure. The average for every other quarterback? 13. That's simply unfair. But the Rams may have shown a blueprint for beating the Packers, as they disrupted Rodgers throughout the day, forcing him into three turnovers. It was Rodgers' worst pro day in…well, in a long time. The Rams offense couldn't get anything going, though, so the pristine defensive effort was all for naught. Even with Rodgers' rough outing, Nick Foles reached a new level of bad Sunday, going 11-for-30 for 141 yards while tossing four interceptions. It really ruined a great performance from the defense.

San Diego has to get called out for their play in the fourth quarter against the Steelers. Not only did they give up a mammoth bomb from Michael Vick to Marcus Wheaton–a play in which it looked like the Chargers' secondary decided to simply stop trying, but they allowed Le'Veon Bell to score with no time remaining in a play where nothing else was going to happen except him running the football. The Steelers didn't even risk having Vick on the field to hand the ball off; it was a direct snap to Bell, who predictably ran it in, thanks to a nice second effort. A couple different Chargers players seemed out of position on the final play, which is really inexplicable. After escaping against Cleveland last week and needing to score 30 unanswered points against the Lions to win in Week 1, maybe this San Diego team isn't as good as people thought coming into the season.

Aaron Rodgers hadn't thrown an interception at home since December of 2012. That's 587 straight passes without a Lambeau pick, and he threw two against the Rams.

Charles Woodson and Peyton Manning have been in the NFL together for 18 years. Sunday was the first time Woodson has ever intercepted Manning.

11 different players caught a pass for the Lions. That's the most in a game this year.

Thomas Rawls' 169 yards rushing is more than Marshawn Lynch has ever ran for in a single game.

Cleveland over Baltimore was a good call, and the Bears not only covered, but they actually won outright. As for the other games? Just heartbreak all around. Let's move on to Week 6:

I like the way Cleveland has been playing lately, and I haven't liked how Denver's been playing at all. Granted, they've still covered most of their games, but I think Cleveland can hold it within a field goal here.

Pittsburgh shocked me last week, and I think they're playing better football now, but they also had 11 days to prepare against San Diego. On a shorter week against a stronger Arizona team? I don't like their chances.

One of these days, I'm going to get a Jacksonville upset correct. Houston has no business being favored over anyone, and they'll probably switch their starting quarterback four times before this game is even played. As long as the Jaguars don't do themselves in with untimely mental lapses, they'll be just fine.

This line could be a billion and I would take it. There's no way Tom Brady and company aren't motivated to destroy the Colts team–on national television, no less–that made them (and us) suffer through a summer of deflated footballs.

The Giants could very easily be 5-0, if not for a couple of fourth quarter collapses. Of course, they could also just as easily be 2-3, so I digress. Either way, they've played good football all season long, while the Eagles have looked inconsistent, at best.