Everything You Need To Know From Week 4 Of The NFL

We're now a quarter of the way through the NFL season. A few teams (Bengals, Packers, Patriots, Panthers, Falcons) have been consistently good (albeit not always against great teams), but just about everyone else has been on a roller coaster ride of mediocrity–occasionally showing flashes of brilliance, but tripping up just as often. That trend continued in Week 4, but in case you missed anything, here are a few of the highlights.

The last time the Chargers played the Browns, it was a sloppy 7-6 Cleveland win, with conditions on the field looking like outtakes from the movie Twister. This time, the fans' got their money's worth (and stayed dry). There were four scores in the final 10 minutes, including a tying score by the Browns that included a two-point conversion with 2:09 to go. But the fans left happy when Josh Lambo kicked a 34-yard field goal with no time remaining, albeit after initially missing the kick but getting a re-do when a Browns player was offsides. 30-27 Chargers win. If you're a fan of running backs catching passes, Danny Woodhead (4 catches, 84 yards) and Duke Johnson (9 catches, 85 yards, and one of the nicest touchdown catches all year) had you covered. Philip Rivers and Josh McCown combined to throw for 714 yards and five touchdowns. Football is much more fun to watch when it's not muddy.

Through the season's first quarter, the most complete team has been the Cincinnati Bengals. Their offensive line, led by left tackle Andrew Whitworth, is allowing plenty of time for Andy Dalton. Against the Chiefs, one of the best pass rushing teams in the league, Dalton went 17-for-24 for 321 yards and a touchdown. Dalton wasn't ever knocked down, and was pressured just two times on 26 dropbacks. Jeremy Hill also got back on track this week, scoring three short touchdowns. The Chiefs did have one great performer on Sunday: Cairo Santos, who nearly equaled an NFL record with seven field goals.

The refrain for the Falcons over the past few years has been the same: Matt Ryan and a plethora of receiving options, led by Julio Jones, could put up some points, but they were hindered by a poor offensive line, running game, and defense. Sunday was a complete 180: Devonta Freeman once again had three touchdowns, Atlanta running backs totaled 239 yards from scrimmage, and both Desmond Trufant and Nate Stupar returned fumbles for touchdowns. And Jones only had four catches for 32 yards. The Falcons were up 42-0 before the Texans added a few garbage time scores to make the final look a bit more respectable, but make no mistake: this was a thoroughly dominating performance.

Meanwhile, Atlanta's division mates were putting on a beatdown of their own. The Panthers also had a defensive touchdown, with Josh Norman returning one of his two interceptions for a score (four total picks for Carolina on the day) in a 37-23 victory of Tampa Bay. Ed Dickson also wins for most interesting touchdown of the day–he was trailing behind running back Jonathan Stewart when the ball popped up "like a greased pig," in Cam Newton's words. Dickson plucked it from the air and chugged 57 yards for a touchdown. Amazing. Is it possible that the best division race might actually be in the NFC South?!

Don't look now, but both New York teams are playing well, after multiple seasons of ineptitude. The Giants held a very strong Buffalo team in check, capping the victory off with a beautiful Rashad Jennings 51-yard catch and run score. Meanwhile, the Jets hopped across the pond and put up 425 total yards of offense. That included a career-high 166 from Chris Ivory, and even Har-vahd grad Ryan Fitzpatrick scrambled for 34 yards and multiple first downs.

Kam Chancellor missed the first two games of this season while holding out, and the Seahawks had a noticeable hole in their defense. He came back last week and Seattle forced a shutout, and this week Kam and Co. held the Lions to just three points on offense. But Chancellor's best play came in the final minutes. After giving up a long pass play to Calvin Johnson, Chancellor came from behind and punched the ball out of Johnson's hand, a split second before Megatron would have crossed the end zone. Instead of a touchdown, it was a fumble and touchback, and preserved the win for the Seahawks. 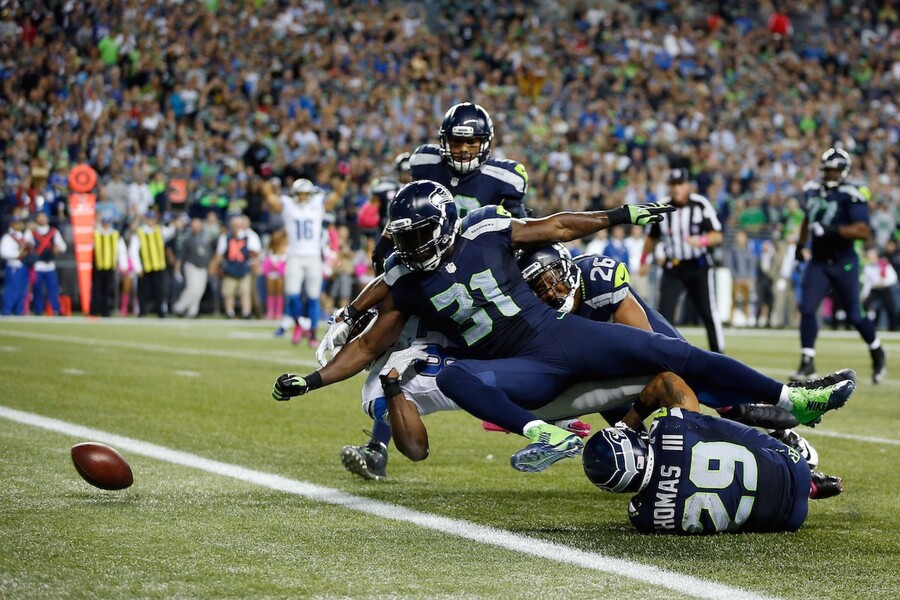 Coming off a 41-14 beatdown of Miami in South Florida, the Bills returned home for a showdown against the Giants. It appeared Buffalo was mentally still hanging out on the beach as they lost 24-10. The Bills were just 3-for-16 on third down, but more concerning were the penalties: 17 for 135 yards. Rex Ryan said after the game that he didn't feel all the penalties cost his team, but considering Buffalo had two touchdowns called back and lost by 14…you could argue otherwise.

Maybe the Dolphins thought a visit to London would cure their woes. But when they hopped off the plane and arrived at Wembley Stadium, they appeared to be a little Jet-lagged. They are just not a good football team. The offensive line is giving Ryan Tannehill absolutely no time, and what's worse, the team isn't even trying to establish the run. Yes, they got down early, but with an explosive option like Lamar Miller in the backfield, it's inexplicable that he only gets seven carries. Tannehill, meanwhile, chucked it up 44 times, completing just 19 passes for 198 yards, two picks, and got sacked three times.

It has not been a good stretch for the 49ers. They gave up a combined 90 points the previous two weeks, and at home against the Packers, they managed a measly three points in a 17-3 loss. With just 196 total yards, the Niners were nearly doubled up in yardage. Their running game is a mess; non-Colin Kaepernick runners mustered 20 yards on nine carries. The offensive line isn't helping either, allowing Kaep to get sacked six times. If San Francisco can take anything positive away from this game, it's that they fumbled three times and recovered all of them. The final score could have been a lot worse.

Dan LeBatard argues that being a kicker after a missed kick is the loneliest feeling in sports. Lonelier than missing a putt to win the Masters, lonelier than losing a tennis match, and lonelier than striking out with the bases loaded. Not only are you letting a city and your teammates down, he says, kickers aren't necessarily considered equals by their beefier teammates. Regardless of how kickers themselves feel about that, a few had truly terrible weeks: Jacksonville's Jason Myers (24 years old) missed a field goal at the end of regulation and another in overtime, and the Jags eventually lost by three, when 42-year-old Adam Vinatieri connected on a field goal for the Colts. Philly's Caleb Sturgis missed a 33-yarder and an extra point in a three-point loss to the Redskins. The Saints' Zach Hocker clanked what appeared to be a gimme 30-yarder off the upright, though he was bailed out on the second play of overtime when Drew Brees hit CJ Spiller for an 80-yard touchdown. And on Thursday night, Josh Scobee had two opportunities to add to the Steelers lead in regulation, but missed both. The second time, Scobee had to watch Justin Tucker send things to overtime with his leg, and eventually win it in the extra session. Because of Scobee's struggles, the Steelers had to go for it twice on 4th-and-short in field goal range. Both times, Pittsburgh neglected to use their best player in Le'Veon Bell. Sometimes, playcalling just gets too complicated, so head coach Mike Tomlin, you're not off the hook, either. Oh, and Scobee was cut shortly after missing those field goals.

The Rams, even with an impressive 24-22 road win over the previously undefeated Cardinals, go here simply because their inconsistency is maddening. They've now beaten the Seahawks and Cardinals, while losing badly to the Redskins and the Steelers, who were missing their starting quarterback for half the game. In their two wins, the Rams have averaged 27.5 points. In their two losses, they've averaged 8. Jeff Fisher's trend of getting his team up for big games continues. 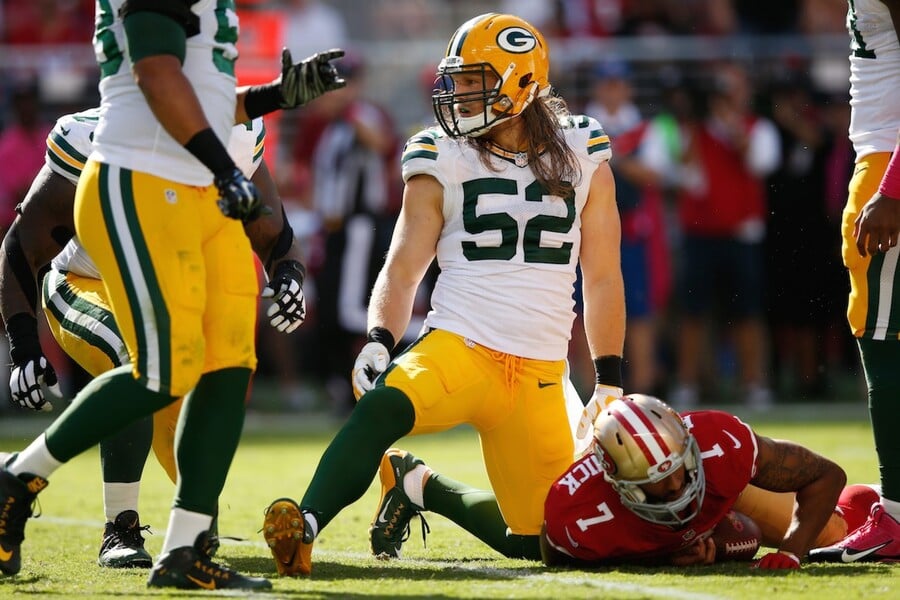 The Ravens allowed a 100-yard rusher for the first time in 30 games.

Buffalo's 57 penalties through Week 4 are the most by any team through its first four games in a decade.

Calvin Johnson has caught 61 passes in the red zone. This was his first fumble.

Despite being outplayed much of the game, the Ravens somehow pulled out the win, and even covered the early line, to boot. The Giants not only covered, they won outright, and the Panthers convincingly crushed the Bucs. As for the Raiders and Cardinals? Well…they just got outplayed. But it's still a winning record overall, so I'll take it! Here are five more for Week 5:

Yes, the Jags couldn't manage a win over the Andrew Luck-less Colts, but they looked competitive and would have escaped with a victory if they had any sort of a strong kicking game. Tampa Bay's offense is a lot more toothless than Indy's. Jags QB Blake Bortles has never won a road game…UNTIL NOW.

The Ravens have lost three games and their lone win was by three points. While it's true Baltimore traditionally has owned this series, the Browns showed a lot of fight in their loss to the Chargers, and Baltimore still has some question marks on defense. I think Cleveland does enough to cover here.

The Giants are playing well, and could very easily be 4-0. The Niners haven't looked good since a Week 1 torching of the Vikings. I don't see either of these things changing.

Pittsburgh will have had a long week to prepare, and the Chargers are nicked up. But the Steelers defense, in particular their secondary, is quite beatable. I suspect Philip Rivers has a field day.

One thing has remained true this season: if Jay Cutler is playing, the Bears are at least competitive. And while Kansas City's 1-3 record is due largely to the quality of opponent they've played, it still seems fairly generous to give them this big of a cushion. This has a late garbage-time score written all over it, which should be enough for Chicago to cover.