Everything You Need To Know From Week 2 Of The NFL

The NFL is a funny thing. Teams can look absolutely incredible one week, and then the following Sunday, it seems like they've never played a snap of football in their lives. Similarly, teams we thought were dreadful get their acts together and dominate on the field. It rarely makes sense, but it's almost always fun to watch. Here are the highlights from Week 2.

Two of the most electrifying receivers in football put on a clinic Sunday. Julio Jones tied Atlanta's franchise record for receptions in one game, hauling in 13 passes for 135 yards, including a beautiful 37-yarder down the sideline with less than 90 seconds left. That set up the eventual game-winning score, as the Falcons won 24-20. On the other side of the field, Odell Beckham Jr. snagged 7 passes for 146 yards, and turned a short catch into a 67-yard touchdown. These guys are an absolute joy to watch week in and week out, and Sunday was no exception.

Let's give a hand to teams that won in large part thanks to their defensive play. After four personal foul penalties in the first 25 minutes of the game, the Denver D righted itself and punished Kansas City for its mistakes. The biggest highlight was Bradley Roby returning a Jamaal Charles fumble for the winning touchdown just nine seconds after the Broncos tied the game, but Todd Davis and Shaquil Barrett also recovered fumbles, and Chris Harris and Aqib Talib picked off Alex Smith passes, totaling five takeaways. The team sacked Smith four times, as well, including on the final play to snuff out any attempt at a Chiefs comeback. Shout out to the Jets, as well, who also forced five turnovers against the Colts, including one at the 1-yard line as Indy was about to score—one of two Darrelle Revis fumble recoveries on the night. That's 10 takeaways now for the Jets in two games—they only had 28 through the past two seasons.

The Steelers are a great example of why we shouldn't overreact after one week. The offense had difficulty moving the ball in a Week 1 loss to the Patriots, but in Week 2, all it took was a little gambling: Pittsburgh converted two early two-point conversions, Ben Roethlisberger threw for 369 yards and three touchdowns, DeAngelo Williams tied a team record with three scores of his own and the team needed just 23 minutes to rack up 453 yards against a hapless San Francisco defense. After four extra points were missed in Week 1 and five more were missed in Week 2, it'll be interesting to see if more teams take after the Steelers and start going for two more often.

Washington running back Matt Jones proved the ground game isn't dead quite yet in the NFL. He ran all over the Rams, rushing 19 times for 123 yards and two scores, and adding another three catches for 23 yards. As a team, Washington ran the ball 37 times—nearly three times as many as St. Louis.

Arizona was one of the best teams in the league last year before Carson Palmer got hurt; their defense can hang with anyone, and Larry Fitzgerald, Michael Floyd and John Brown are a fairly formidable trio. Palmer is back this year and has already thrown for seven touchdowns, finishing an efficient 17-for-24 for 185 yards and four touchdowns. And he had some help from his electrifying rookie running back: David Johnson returned the opening kickoff a club record 108 yards, and also added a rushing touchdown, becoming the first player in NFL history to have a rushing touchdown, a receiving score, and a kickoff-return touchdown in the first two games of his career.

The Tom Brady "Middle Fingers in the Air" tour is in full force. The quarterback, who you may recognize from his starring role in this summer's blockbuster hit "Deflategate," torched the Bills for 466 yards and three touchdowns, then suggested afterwards that the team left a lot of plays on the field. One thing that's for certain: Brady simply owns the Bills. With the 40-32 win, he improved to 24-3 against Buffalo. 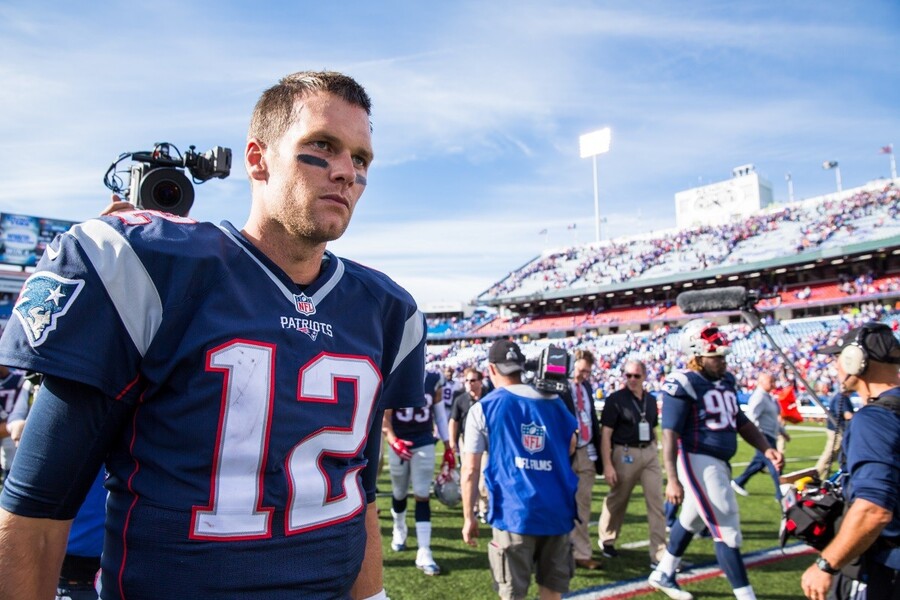 It's been 17 years since the Ravens didn't have either Ray Lewis, Ed Reed or Terrell Suggs on the field. Two of them have retired, and Suggs was lost to a season-ending Achilles injury last week. It showed on the field, as Baltimore got absolutely torched by Oakland's Derek Carr, to the tune of 351 yards passing and three touchdowns. As a unit, the Ravens gave up 448 yards—more than twice what they allowed to the Broncos last week—and only sacked Carr once.

One of the teams who looked great in Week 1 and terrible in Week 2? The Buffalo Bills. The defense gave up 507 yards, the offense managed 47 yards total on nine possessions after an opening touchdown drive, and the team was penalized 14 times for 140 yards. That's not going to win you a lot of football games, and it's definitely not going to be a good enough effort against the defending Super Bowl champs.

The Vikings were torn apart on the ground last week, giving up 230 yards to the 49ers. But the Lions simply couldn't get anything going against them, netting just 38 yards on 16 rushing attempts in a 26-16 loss.

Miami looked shaky in its Week 1 win, and Week 2 wasn't any better. The Dolphins did a terrible job closing out each half; Brent Grimes dropped an easy interception that could have been returned for a touchdown and Brice McCain was flagged for pass interference on third down, allowing Jaguars rookie kicker Jason Myers to nail a 58-yard field goal heading into the break. And to end the game, Olivier Vernon got a dumb personal foul penalty when he shoved tight end Clay Harbor after the play was over. That moved the Jags 15 yards closer, and Myers hit an easy 28-yarder to give Jacksonville its first win of the season.

Hold onto the ball, running backs! Jamaal Charles fumbled twice, once deep in Broncos territory, and the other at the end of the game that resulted in the deciding touchdown. Jeremy Hill lost two fumbles for the Bengals, and Adrian Peterson would have had a pair of lost fumbles as well, but one of his was negated because a defender lined up offsides. Seven other running backs put the ball on the turf, too.

The Packers have scored in the first quarter in 18 straight regular season games, an NFL record.

Before doing so on Sunday, Oakland hadn't scored more than 36 points in a game since 2011.

One of the surest things in the NFL? St. Louis will have a letdown after playing the Seahawks. In losing to Washington, the Rams are now 2-15 since 2005 in regular-season matchups immediately following a game against Seattle.

Well, my winning record was short-lived. That was about the only prediction I got right. The Patriots won, but the Titans, Lions, Niners and Rams all just completely blew it.

It's safe to say New Orleans isn't playing very well right now, and have been routinely beating themselves with silly mistakes and penalties. Meanwhile, the Panthers defense has looked very strong, giving up just 565 yards and 26 points total through two games. That's a good enough combination for me to favor the home team giving just a field goal.

Without Terrell Suggs, the Ravens are missing their defensive leader, and looked so, so bad against the Raiders, a team that, while full of potential, is still far away from being an offensive stalwart. And now they're going up against the Bengals, who have averaged 28.5 points and nearly 400 yards of offense through the first two weeks. I like Cincy to win outright, but definitely grab the points.

No Dez Bryant. No Tony Romo. No strong rushing attack. No chance? Nah, won't go that far, but Dallas is going to struggle to score points, even against a shoddy Atlanta defense. And the Matt Ryan/Julio Jones connection has been among the most solid in the league thus far. No reason that shouldn't continue here.

The Cardinals have dropped 79 points through the first two games, and host the Niners, who just got torched for 43 and gave up just under 20 yards per minute against the Steelers. It's easy to overreact after one week, and it's entirely possible I'm doing that here, but until 'Zona disappoints me, I'll roll with them.

Denver hasn't looked good in either of its wins, and Detroit hasn't looked good in either of its losses. In a situation like this, the better choice is usually to take the home team, particularly if they're getting points. I don't feel comfortable about it, but hey, let's give it a shot. After all, if Week 2 taught us anything, it's that every single game is a tossup until it gets played.