Everything You Need To Know From Week 16 Of The NFL

The post-season participants are nearly sewn up, as we finished a wild, penultimate week of the season. A few teams are trending in the right direction, while others are making questionable calls at the worst possible times. In case you missed anything, here are all the highlights from Week 16.

Though a handful of contests finished as one-score games, they weren't really close (or exciting) throughout. Because of the playoff implications and bonus football, we'll go with the Jets' 26-20 overtime win over the Patriots. It included a New England overcoming a 14-point deficit to tie the game with two minutes left, and then a coin toss call heard 'round the world, which resulted in the Jets marching down the field and scoring on the first possession of overtime. We'll also give an honorable mention to the Jacksonville/New Orleans game, which saw 65 points and nearly 1,000 total yards between the two teams. Hey, sometimes two good offenses facing two bad defenses can put on quite a show.

No Honey Badger, no problem. Even with Tyrann Mathieu sidelined, the Cardinals made the Green Bay offense look absolutely silly. Arizona harassed Aaron Rodgers all night, sacking him eight times and forcing him into three turnovers. And just for good measure, they sacked backup Scott Tolzien once, as well. Just how dominant was the Cardinals defense? They scored more than Green Bay's offense, as both of Rodgers' fumbles were returned for touchdowns. Arizona has won nine in a row and don't appear to be slowing down anytime soon. They've locked up a first-round bye, and will clinch homefield in the NFC if they beat Seattle next week and Carolina loses to Tampa Bay.

Despite a brain freeze moment where Kirk Cousins took a knee on first and goal with six seconds left and no timeouts remaining in the first half, the Redskins dominated the Eagles 38-24, as they clinched the NFC East. Cousins threw for a season-high 365 yards and tossed four touchdowns, while DeAngelo Hall led Washington's defense with a fumble return for a touchdown, one of SEVEN fumbles the Eagles had on the day. As a unit, the Redskins held the Eagles to a paltry 45 rushing yards and sacked Sam Bradford five times. It wasn't pretty, but Washington is going to win the division with at least a .500 record. Nobody would have predicted that a month ago. Bonus shout out to this game's tight ends, too – Jordan Reed and Zach Ertz combined for 22 catches, 251 yards and two touchdowns.

Look out, world. Brandon Weeden is ON THE LOOSE. After coming in for spot duty last week, Weeden once again started for a Texas team this year, leading Houston to a 34-6 victory over the Colts, a win that clinched the AFC South for the Texans. Weeden threw for two touchdowns and ran for another one, while the Houston D forced four turnovers, including a 33-yard fumble return from Quintin Demps. Sure, half of Houston's wins have come against the AFC South, but they're returning to the playoffs, and their defense has looked great over the second half of the season. They could be a difficult matchup for a few teams come the postseason.

At the time, the Falcons needed a win over the undefeated Panthers to keep their slim playoff hopes alive. Never mind that Atlanta had lost 38-0 just two weeks earlier; they came out inspired and looked like the team that started 5-0, not the one who had lost seven out of their past nine games. Julio Jones had one of his standard "amazing but it he makes it look so effortless that it's slightly less impressive" catches en route to 178 yards and a touchdown, and the Falcons defense held high-flying Cam Newton to 17-for-30 passing for 142 yards. After the Seahawks lost later in the day, it appeared the Falcons just might live to fight another week…

…but then the Minnesota Vikings took the field for their Sunday night tilt against the Giants. With eight seconds left in the first quarter, Blair Walsh hit a field goal, giving the Vikings a modest 3-0 lead. The Vikings then proceeded to rip off 46 of the next 56 points as they stormed into the postseason. Minnesota racked up 218 rushing yards and forced Eli Manning into three interceptions, including a pick-six by Harrison Smith. A date with Green Bay awaits next week–the winner will take home the NFC North crown. 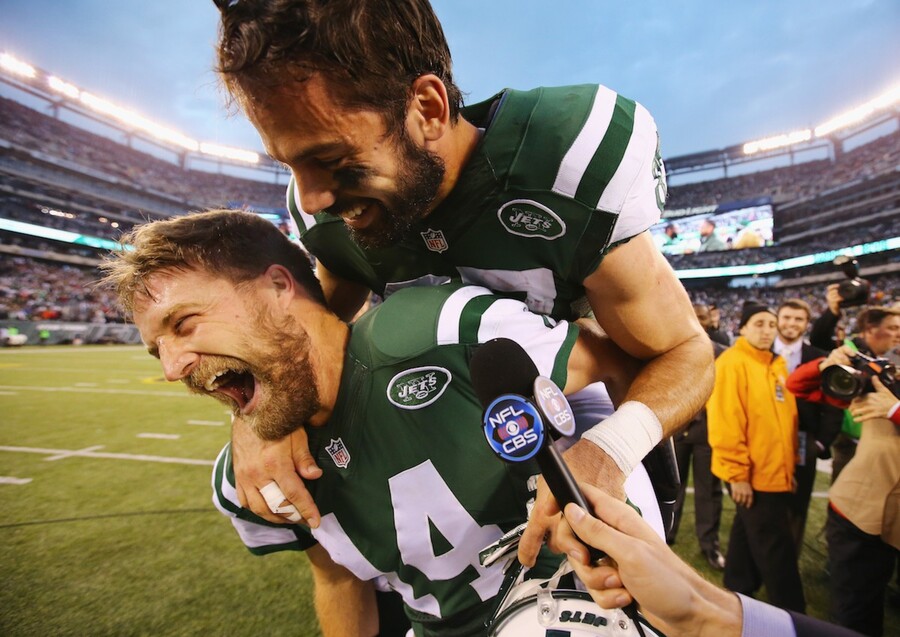 Here's a good rule of thumb: if you win the coin toss in overtime, elect to receive the ball. At worst, your offense starts with the ball. At best, you can win the game without ever letting the other team have a possession. New England's Matthew Slater learned that the hard way: after the Patriots forced overtime, they won the coin toss, only for Slater to say they wanted to kick to the Jets. As you can probably guess, the Jets scored a touchdown just four plays later, winning the game and potentially knocking the Patriots out of the first seed in the AFC. In Slater's defense, head coach Bill Belichick confirmed after the game that he had instructed Slater to say they wanted to kick off. It was an odd call, and it backfired.

If you asked people which team they were most afraid of headed into the postseason, the most common answer would likely be the Pittsburgh Steelers. Thanks to a baffling loss to the Ravens, the Steelers might not even make the playoffs. Pittsburgh lost despite getting almost 100 yards in pass interference yardage, having a Jimmy Smith 101-yard interception return negated by a neutral zone infraction, and seeing DeAngelo Williams rush for 100 yards and two scores. The Steelers also curiously wasted two timeouts in the first eight minutes of the second half, timeouts they probably would have liked to have in the final minutes of a close game. Ben Roethlisberger, who threw two ugly interceptions, said after the game that he didn't remember why the team called those timeouts.

For whatever reason, the Seahawks tend to play terrible football against the Rams. Despite only allowing 207 yards of offense, Seattle once again shot themselves in the foot, as Russell Wilson threw an interception, and Akeem Ayers brought a fumble back 45 yards for the Rams' first score of the game. Seattle will also have to do something about their rushing offense until Marshawn Lynch can return to action – Russell Wilson had 39 yards on six carries. The rest of the Seahawks backfield had 16 rushes for just 21 yards.

It's hard to fault a team too much for losing when they're already eliminated from the playoffs. At least with the loss, they're only helping their draft position. But the way Tampa Bay has imploded over the past few weeks has been difficult to watch. Sunday was more of the same, as they shot themselves in the foot too many times. Jameis Winston threw a jump ball off his back foot into the end zone that was intercepted by the Bears – it looked like Winston was doing his best impersonation of "500," the favorite game in schoolyards all across the nation, where you heave the ball up in the air as high as you can and call out a point value for the catch. In this case, Winston called negative-six, since that's how many points he took off the board. Later on, C Joe Hawley literally rolled the ball to Winston instead of snapping it to him. Though Winston recovered the fumble, the play put the Bucs on the edge of field goal range, and Connor Barth immediately missed a kick on the next play. There were some flashes of potential during this Tampa Bay season, but they've been taking steps backward lately.

Update: The Miami Dolphins are still very, very bad. The patchwork offensive line gave up six sacks in an 18-12 loss to the Colts. With 40 seconds left, the Dolphins had first-and-goal from the Indy 5, but three straight incompletions and a premature snap resulting in the final Colts sack ended any chance for a comeback. It remains to be seen if Ryan Tannehill is actually a good quarterback, though if Dolphins CB Brent Grimes' wife Miko has anything to say about it, he is not. She went on a Twitter rant after this latest lost to share her thoughts about Tannehill, namely that she "knew this qb stunk." She quickly deleted the tweets, but hey, it's the Internet. Everything lasts here.

Arizona's nine-game winning streak is their longest since 1948.

Both Washington and Arizona clinched their divisions in Philadelphia in back-to-back weeks.

The Rams beat the Seahawks in Seattle for the first time since 2004.

San Diego and Oakland each had more penalty yards than rushing yards.

Picking every game that had a line last week got me back to .500 for a week, so…that's progress? Barring a near-perfect week, I'll head into the postseason a loser, but hey, gotta keep playing those games (even if we don't know which teams will be sitting starters). Let's pick 'em all again. Enjoy the final week of the regular season!