Everything You Need To Know From Week 14 Of The NFL

Yikes, talk about a stinker of a week. This was a good Sunday to get your holiday shopping in, because there were blowouts, routs, and demolitions, but very few close games. If you missed anything, we've got you covered.

You'll have to go all the way back to the first game of the week to find the most entertaining one. The Cardinals and Vikings gave us a solid 23-20 contest that featured some terrific passing between the two teams, as Teddy Bridgewater and Carson Palmer each completed 25 passes, for 335/1TD and 310/2TDs, respectively. There was also a little intrigue down the stretch. The Vikings marched down to the Arizona 31 with 13 seconds left and trailing by three. But Dwight Freeney spun like a whirlwind and knocked the ball out of Bridgewater's hands, ending any chance at a comeback. Not only did the sack clinch the game, Freeney earned $200,000 for getting it. Finally, we witnessed exceptionally subpar running from Arizona running back Kerwynn Williams, who finished with two yards on six carries. His longest run? Seven yards, meaning his other five went for an impressive NEGATIVE five yards. It's rare you get to see someone average a full negative yard per carry, but Williams pulled it off. He's probably not going to be treating his lineman to Rolexes anytime soon.

There's been an interesting habit amidst the plethora of average teams in the NFL, where they lose games they should be winning. The Jets had a prime opportunity to drop the ball against the Titans today, and they came out firing. Ryan Fitzpatrick had 263 yards and three touchdowns, and if not for a trick play where Antonio Andrews found Marcus Mariota for a 41-yard score, (that's a RB to QB play for those of you scoring at home), the Jets defense would have pitched a shutout. As it was, they had five sacks and an interception, and held the Titans to fewer than two yards per carry. With how muddled the wild card picture is in the AFC, this was a huge win for the Jets. And really, a big loss for the Titans, too, as they remain tied for the worst record in the league.

Uh, Cleveland, where has this offense been all year? Sure, it was against a woeful 49ers team, but still…they outgained San Francisco 481 to 221, and had more rushing yards than the Niners had total offense. The Browns wanted to take a stand by benching Johnny Manziel a few weeks ago, though they had to start him today thanks to a rash of injuries to the team's other quarterbacks. And that's a good thing. Manziel signed a fan's $100 bill "Money Manziel" before pregame warmups, which is probably the least surprising thing you'll read all week. In a lost season, the Browns need to see what they have in him. Today was a step forward, but the next three weeks are at Seattle, at Kansas City, and home against Pittsburgh. Let's check in on Money Manziel at the end of the season and see how he's doing.

With just under two minutes in the first half, the Jaguars found themselves down 13-3 to the Colts. But over the final 31:56, Jacksonville scored an absurd 48 points, checking off just about every box in "Touchdown Bingo:" 80-yard bomb to Allen Hurns (who shook off a monster hit from two defenders), a punt return from Rashad Greene, a goal-line sneak by Blake Bortles, a short dive by Denard Robinson, and a few more passes for good measure. Don't look now, but the Jaguars are only a game out of first place in the woeful AFC South (more on them in the next section).

If you're a fan of offense, the Broncos and Raiders played a pretty awful football game by any stretch of the imagination. They combined for 61 rushing yards on 44 attempts, and even taking away four kneel downs from Derek Carr, the total was 40 rushes for 65 yards, barely cracking 1.5 yards per carry. Passing wasn't much better: Brock Osweiler did manage 308 yards, but needed to throw 51 times to get there. On the other side, Oakland had fewer than 100 yards passing. But this section isn't about the bad offense, it's about the terrific defense, particularly from Khalil Mack. The second-year DE out of Buffalo had FIVE sacks, tossing Brock Osweiler around like a rag doll. It was very much like how bored gamers treat their Sims characters: just minute after minute of abuse. On Denver's final three possessions, Mack defended a third-down pass and twice sacked Osweiler. They've probably let too many games slip through their fingers to make a playoff appearance this year, but there's a lot for Raiders fans to be excited about.

Russell Wilson has never had a lot of weapons around him, yet he's somehow always seemed to make it work. And he's playing better than anyone in the league right now. With five touchdown passes Sunday, he's got 16 in the past four weeks. And the Doug Baldwin Renaissance Tour continued, as he grabbed six passes for 82 yards and three touchdowns. Baldwin joins extremely rare company amongst his fellow receivers, with three straight games of two or more touchdown receptions. The defense punished the already beat up Ravens offense, forcing a fumble and holding the Baltimore rushing attack to just two yards per carry. Really the only bad thing to happen Sunday was that the Seahawks lost Thomas Rawls to a fractured ankle. He'll miss the rest of the season, but as it's been all year, the next man up will just have to get the job done. Fred Jackson, we're looking at you. 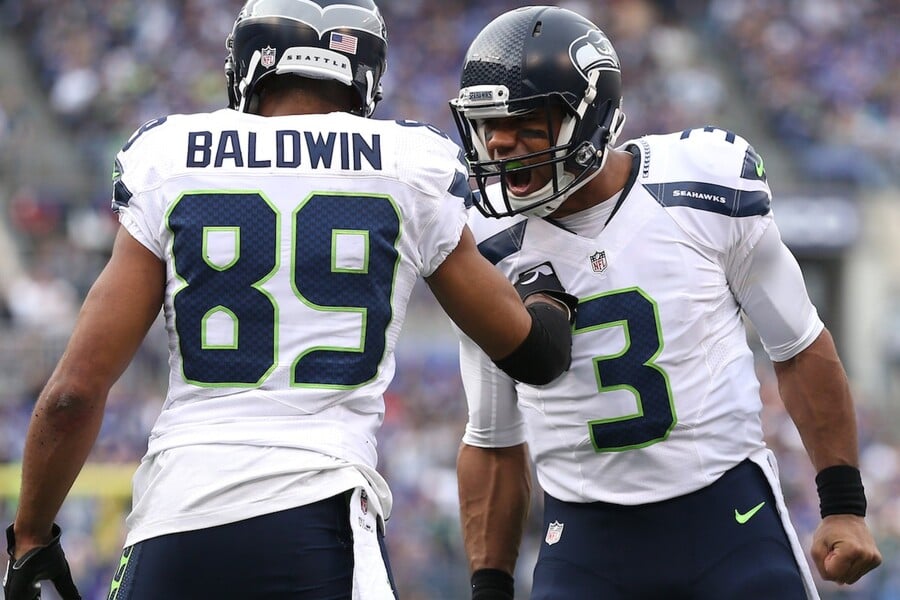 When the Chiefs and Chargers kicked off at Kansas City, the elements hinted that it might be a sloppy game. But this was worse than anyone could have imagined. The Chiefs won 10-3 as the rain poured down, though anyone who participated in or watched this game would like three hours of their life back. Despite weather that would seemingly favor the ground game, the Chargers mustered only 44 yards on 18 carries. After getting down to the Kansas City 2 with 16 seconds left, the Chargers then proceeded to lose seven yards, and Rivers' final pass to Danny Woodhead bounced off his hands and harmlessly out of the back of the end zone. It's a terrific representation of how San Diego's season has gone.

After Week 5, the Falcons were 5-0, with a 90% chance to make the playoffs. They've now played 13 games, and only have one more win than they did after Week 5. Their playoff odds currently? Three percent. The latest embarrassment was a 38-0 drubbing at the hands of the Panthers. Atlanta fumbled four times, were outgained by nearly 200 yards, and their yards per play was barely half that of the Panthers. Coming into the week, it was already a long shot for the Falcons to make a return to the postseason. But now, better start prepping for 2016.

For the second straight week in a row, the Bears turned to Robbie Gould to make a field goal at the end of regulation. Last week, it was to win it. Gould missed, and Chicago eventually lost in overtime. This time around, the Bears had gotten onto the fringe of Gould's range, a 50-yarder in the rain, with the team down three. He missed it badly to the left, resulting in another Bears loss. Gould said after last week's loss that, as a kicker, you accept the accolades when you win the game, so you have to accept the blame when you lose it. But man, he's had a rough couple of weeks.

With a chance to grab first place in the AFC South, the Houston Texans took the field for a primetime Sunday night game, and…just took a beating in a 27-6 loss to the Patriots. New England pestered Brian Hoyer all night, sacking him five times and forcing the Texans into just 3.6 yards per play. Houston only got seven first downs, and was a combined 3-for-16 on third and fourth down. Tight end Ryan Griffin had two passes where he appeared to catch the ball, only to drop it when he fell to the turf. The good news for the Texans? The Colts also lost, so they're still tied for first place. At 6-7. You've got to love the AFC South.

The Browns rushed for as many yards this week as they passed for last week.

Todd Gurley had 14 more yards rushing this week than he did the previous three weeks combined. He needed 27 fewer carries to do so.

The Colts had won their previous 16 games against AFC South opponents before getting routed by the Jags.

Really, the best advice I can give at this point is to do the opposite of what I suggest. The Patriots and Seahawks got easy road wins, but teams I thought were playing easier opponents (the Lions against the Rams, the Niners against the Browns, and the Cowboys to at least cover against a shaky Packers team) all fell through. Just goes to show you, there are a lot of bad teams in the NFL.

This is one of those awkward betting zones, because how often do you really see a game decided by five points? Either way, the Bears have been within a touchdown in just about every game where Jay Cutler has played the whole game, so I'm banking on them sticking around here. They'll probably find a way to blow it in the end, but all they have to do is lose by fewer than five.

Washington is 5-2 at home. That's enough for me to take them here, even if the last time we saw them at home was that ugly Monday night loss against the Cowboys. Let's just hope DeSean Jackson doesn't try to run backwards 20 yards on a punt return again.

I know not to overreact to one game, but this line feels low for a Jacksonville team that, while erratic, has played well for about a month a half now. I'm not sure Atlanta has the offensive firepower to keep up with them.

When these two teams met last year, Miami won 37-0. They could win 3-2 here for all I care. Philip Rivers hasn't looked fully healthy the past couple of weeks, and the Chargers haven't been healthy for two months. Miami still has a really small shot at the playoffs. I think they can avoid elimination for one more week.