Everything You Need To Know From Week 11 Of The NFL

After a few weeks of entertaining football, we were due for a dud. But man, this was a really bad week. We had brutally uninteresting games, a few awful performances, and a nearly concussed quarterback was allowed to stay in the game. In case you missed any of the action, here are the highlights from Week 11.

This one isn't even close: Cincinnati and Arizona gave us a Sunday night instant classic that at least partially made up for the rest of the week. Current Bengals quarterback Andy Dalton and former Bengals quarterback Carson Palmer had a nice duel going, combining for six touchdowns and nearly matching each other in yardage – Palmer had 317 passing yards, while Dalton had 315. Cincinnati took a quick lead, then Arizona came roaring back, and Cincy tied it at 31 before we saw a rare "simulating the snap count" penalty on Cincinnati's Domata Peko that put the Cardinals a lot closer for the game-winning field goal, which Chandler Catanzaro made. An interesting ending to an interesting game.

Jameis Winston has had a rocky rookie season (as most first-year quarterbacks do), but he looked absolutely amazing in a 45-17 shellacking of the Eagles. His five touchdown passes tied a record for NFL rookies, joining just Detroit's Matthew Stafford in 2009 and Chicago's Ray Buivid in 1937 as the only quarterbacks to accomplish that feat. He finished the first half with a 135.9 passer rating, and all of his touchdown passes were to different receivers. The Bucs have gone a long time without a proficient passer under center. It's still too early to tell if Winston will be the answer, but games like this are quite reassuring.

Ensuring Winston wasn't the only former National Championship winner to throw for five scores, Cam Newton tore up a different NFC East team, as the Panthers remained unbeaten with an easy win over the Redskins. Newton also mixed it up, throwing three touchdowns to three different receivers, and making sure both running back–Jonathan Stewart and Mike Tolbert–found paydirt, as well. The only thing as varied as the receiving corps was the Panthers defense. They recovered four Washington fumbles, courtesy of Luke Kuechly, Kony Ealy, Bene Benwikere and Thomas Davis. In fact, the Redskins were so frustrated that Washington DE Jason Hatcher said after the game that it feels like officials are against them because of the team's name. When you've got the other team thinking like that, you know you're doing something right.

Possibly the worst possible outcome for the Broncos is for Brock Osweiler to play well in Peyton Manning's absence. That'll make for an awkward decision when Manning is deemed healthy enough to play. Manning was hurting Denver's chances to win these past few weeks, and really hasn't been himself all season. Sunday we got a glimpse of life without Manning for the Broncos, and you know what? It wasn't bad at all. Osweiler, who said he didn't waste a single day studying under Manning, went 20-for-27 for 250 yards and two scores. He was sacked five times, but showed poise in big situations, hitting Demaryius Thomas for a 48-yard touchdown on the opening drive, and finding Cody Latimer in the end zone after the Bears had cut it to one. Osweiler's teammates stepped up, as well. Ronnie Hillman and C.J. Anderson combined for 161 yards out of the backfield, and the Denver D held Chicago to three field goals until the final 24 seconds, then stopped Jeremy Langford on a run when the Bears went for a game-tying two-point conversion. The Broncos have a big enough lead in the AFC West that they can afford a few slip-ups while Manning is out, but if Osweiler has anything to say about it, those slip-ups will be few and far between.

Tony Romo himself was understandably rusty in his first game back after missing seven games with a broken collarbone. But his presence alone gave the Cowboys a much needed spark. Rolando McClain kicked off the scoring with a 12-yard interception return. Romo got involved a bit later; his first pass was from his own end zone, and it was a short toss with his left hand. Once he started using his more dominant hand, things got even better. He did have two interceptions, including a really dreadful one in the red zone, but he made a handful of throws that Brandon Weeden and Matt Cassel haven't made in his absence. One was a beautiful touchdown toss to Terrence Williams in the end zone, allowing the receiver to lift up over two Dolphins defenders for the score. With the Giants on a bye and both Washington and Philadelphia losing, the Cowboys, even at 3-7, are very much alive in the NFC East. That's both inspiring and eye roll inducing.

Thomas Rawls wasn't even guaranteed to make the Seahawks' roster back during training camp. But earlier this year and again on Sunday when Marshawn Lynch was a late scratch, the rookie out of Central Michigan has simply looked unstoppable. At 5'9″ and 215 pounds, he's somehow simultaneously a bruiser who can also get outside and burn you with a long run. It's really impressive to watch him, and against the hapless 49ers, he totaled 255 yards on 33 touches, scoring both a rushing and receiving touchdown. That makes 530 rushing yards and two scores in the four games in which Rawls has received the bulk of the carries. With Lynch turning 30 in April, the Seahawks may have finally found their new workhorse running back. 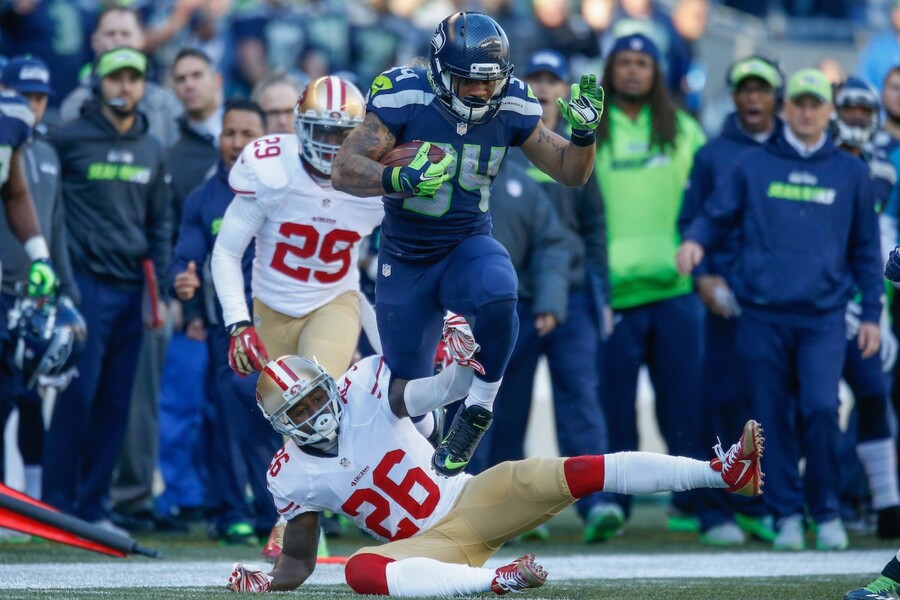 Leonard Hankerson caught a touchdown pass on Atlanta's first drive of the second half, and the Falcons went up 21-7. After that, everything went downhill. The team only managed 67 yards the rest of the way, and had as many turnovers as they did first downs, with three apiece. Matt Ryan also had a truly terrible interception–throwing the ball right to D'Qwell Jackson for a six-yard interception return. It was so bad, even the ball was disgusted by the decision. The pick six was part of 17 straight points for the Colts, and Atlanta has now lost four out of their last five after starting 5-0.

Case Keenum was making his first start for the Rams, a change that was supposed to provide a spark for a team that has had some impressive wins and more than a few head-scratching losses. Keenum was involved in several big plays, but unfortunately, most of them involved him giving the ball to the Ravens, a team noticeably not the one Keenum plays for. He finished 12-for-26 for 136 yards and fumbled three times, losing two of them. The most crucial gave the Ravens the ball with 54 seconds remaining. And that happened soon after a hit that slammed Keenum's head, and left him on his hands and knees–it looked 100 percent like a concussion. But Keenum stayed in the game and eventually fumbled. That left plenty of time for Baltimore, who earlier lost Justin Forsett to a gruesome broken arm, and who saw Joe Flacco tear his ACL on the final drive but stay in the game to lead his team for the winning field goal. It was an extremely ugly game, with three missed field goals, a missed extra point, six turnovers and 15 punts. Credit the Ravens for gutting out a win, and shame on the Rams for letting a quite likely concussed player stay in the game.

Five games into the season, the Jets were 4-1 and looking like one of the surprise stories of the NFL. But since then, they've been a completely different team. They've only beaten the Jaguars, in a game that they probably should have lost. Sunday was no exception, as they got down big early against the Texans. The running game is still virtually nonexistent, and the defense seemed very confused by Houston's Wildcat attack; Cecil Shorts ran four times for 26 yards, and threw a touchdown pass to a wide open Alfred Blue after a backwards pass. Credit the Texans for a unique game plan, but the Jets have gone from what seemed like a sure playoff position to middle of the pack in a hurry.

Minnesota has a gaudy record, but their first real test came at home against the Packers on Sunday. And the Vikings pretty much failed it. Adrian Peterson only ran 13 times for 45 yards against a fairly pedestrian run defense, losing a fumble as well. And the offensive line gave Teddy Bridgewater no protection at all, allowing six sacks in a 30-13 loss. In fact, Bridgewater had to briefly leave the game, he was so banged up. The defense didn't do the offense any favors, either. Terence Newman had a 50-yard pass interference penalty on third-and-15 with 10 seconds left in the first half. Anthony Barr had an illegal contact penalty on another third down. As a team, the Vikings were flagged eight times for 110 yards.

In all but one week this season, tight ends facing the Oakland Raiders have scored a touchdown. Not only did Detroit's Eric Ebron not score, he didn't even have a single catch in the Lions' 18-13 win. Of course, Ebron will probably take a win over individual accolades, but his inconsistency over his first two seasons has to be maddening to Detroit fans. All the physical tools are there, yet he hasn't been able to put it together yet.

The Chiefs' Dontari Poe scored on a one-yard run against the Chargers. At 346 pounds, that makes him the heaviest player in NFL history to score a touchdown.

Washington running backs ran 11 times for 10 yards against the Panthers.

Leodis McKelvin has now fumbled twice against the Patriots on kickoff or punt returns. Both fumbles resulted in touchdowns that ended up being game winners for New England.

The only undefeated quarterbacks with more than one start are Cam Newton, Tom Brady, Matt Hasselbeck and Tomy Romo.

With both Chicago and Arizona getting late-game scores, we have a very rare double push! Not too shabby. Tampa and Kansas City both covered with ease (Tampa would have been a great underdog pick, as they floated around +5 and +6 all week). And the Vikings showed that maybe when they actually play a good team, they might not be all that. But hey, this is my first winning week since the Reagan administration, so I'll take it. Onto Week 12.

Carolina is undefeated. Dallas is 3-7. Yes, I know Tony Romo makes the Cowboys more of a threat, but come on. They've beaten a Giants team that gave them the game, and inconsistent Eagles and Dolphins squads. The Panthers are better than any of their previous victories.

I know I just trashed the Vikings above, but Atlanta has been even worse. Until they prove they can win a game, they shouldn't be favored over anyone. I think Minnesota gets back to establishing the run in this one, and an opportunistic Vikings defense will take advantage of Matt Ryan's propensity for throwing horrible passes to the other team.

The Redskins have looked better of late (blowout loss to Carolina, notwithstanding), but the Giants are coming off a bye, and are about to face a brutal portion of their schedule. They'll need to win this one to stay in first place in the division, so I think they'll be focused.

Kansas City has scored 107 points in their last three games, all wins. They've given up just 26. Good luck, Buffalo.

Yes, this week is so bad I am actually picking this game. Johnny Manziel versus Matt Schaub. I'm fairly confident I won't be watching, and neither should you. Enjoy your Monday night.