Everything You Need To Know From Week 1 Of The NFL

Is there any sweeter sight than football returning into our lives? Well, if you don't like football, then maybe not. But for everybody else, here's everything you need to know from Week 1 of the NFL season.

All due respect to the crazy comeback from the Cowboys, but the Seahawks and Rams played a game that was exciting for a full 60 minutes (plus overtime), not just the final quarter and a half. Seahawks receiver Tyler Lockett returned a punt 57 yards for a touchdown. Rams wide receiver Tavon Austin did him one better, with a 16-yard run out of the backfield and a punt returned for 75 yards and another score. Later, Cary Williams recovered a fumble on a kickoff and returned it for a touchdown. That would have been the winning score if not for Seahawks safety Dion Bailey getting burned by Lance Kendricks with under a minute left in the game. With that touchdown, the Rams forced overtime, and ended up winning by a field goal. In this case, Russell Wilson, who predicted a win on Twitter, didn't get to throw the fateful final pass, but instead handed off to Marshawn Lynch, who was promptly stopped on 4th and 1. 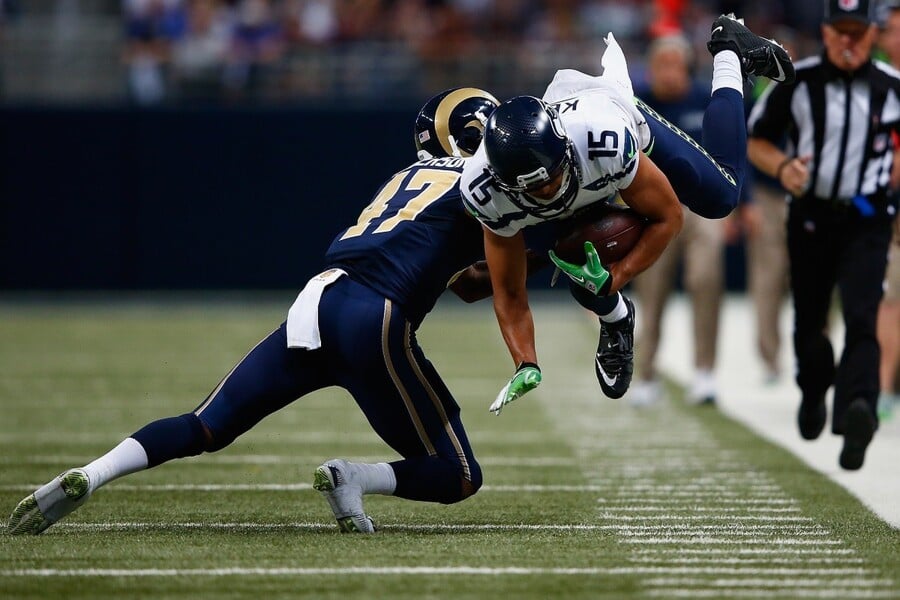 For at least a little bit of time, it looked like it'd be the year of the tight end. Six of the first eight passing touchdowns of the season went to tight ends: New England's Rob Gronkowski had three and his teammate Scott Chandler had one on Thursday night, and Travis Kelce caught two touchdowns to put Kansas City up early. In the afternoon games, Austin Sefarian-Jenkins racked up two garbage-time scores and 110 yards for the Bucs, and Jason Witten secured two touchdowns, including a game winner with seven seconds left, in the Sunday night game.

Speaking of that Sunday night game, we should probably start admitting Tony Romo has a few clutch genes in him. He finished 11 for 12 for 147 yards, led the Cowboys on a game-winning drive with 1:37 remaining, and threw the clinching touchdown after dropping the snap. In a losing effort, the Giants' Trumaine McBride ripped a ball out of Cole Beasley's hands that his teammate Dominique Rodgers-Cromartie returned for a touchdown just before halftime, and McBridge almost scored a touchdown of his own in the second half, returning an interception down to the one-yard line. Rashad Jennings punched it in on the very next play.

The Chiefs D, which was merely pedestrian last year, looked otherworldly against the Texans. If not for a couple of garbage time touchdowns, it would have been the best defensive performance of the week. Marcus Peters picked off a pass, Justin Houston forced a fumble, and Allen Bailey had the best belly flop onto a loose ball, particularly because he's almost 300 pounds. Other people we were glad to see in this game: Eric Berry, who made his first appearance since revealing he had lymphoma in November, and Sarah Thomas, serving as a line judge and becoming the first female official in NFL history.

Eagles linebacker Kiko Alonso had quite the ridiculous interception in the end zone. He did his best Odell Beckham Jr. impression, needing just one hand to pick off Matt Ryan. It was Ryan's first interception in the red zone since Week 10 of 2013. Unfortunately for Alonso, it came in a losing effort.

So much for taking a step back this season. Matt Forte, possibly the most underrated player in all of football, just continues to be a bright spot for the Bears. He finished with 141 yards rushing and a touchdown, and added another 25 yards through the air on five catches. It's unlikely he'll challenge his running back record of 102 receptions, but he's still going to be a major force for an offense that needs all the help it can get.

Adrian Peterson essentially had an entire season to rest and prepare for his first game back this year. And he… well, he didn't show up. Peterson finished with just 10 carries for 31 yards, as the entire Vikings offense looked like a Madden team with all the skill sliders set to zero. The offensive line gave up five sacks from five different 49ers, and as a team Minnesota only converted one first down. And on national television, too. Yikes.

When the Lions lost Ndamukong Suh and Nick Fairley from their defensive line this offseason, there were some questions about how the defense would fare. If Week 1 is any indication, it's going to be a LONG season. Despite jumping out to an early lead, the Lions gave up 30 unanswered points in their loss to the Chargers. Philip Rivers threw for over 400 yards and the Chargers held the ball for more than 38 minutes. The Lions also gave the Chargers three first downs from penalties.

Browns QB Josh McCown, on his third team in as many seasons, looked to be running free towards a touchdown early in his game against the Jets. Unfortunately, he did his best impression of a helicopter in attempting to jump over (or really, through) the defense. He fumbled the ball right at the goal line, and later left the game with a concussion. His backup, a guy you've probably never heard of named Johnny Manziel, did throw for a touchdown, but also had three turnovers in an ugly 31-10 loss.

Adam "PacMan" Jones took playing until the whistle to a new level. During the Bengals' 33-13 victory over the Raiders, Jones found himself tangled up with receiver Amari Cooper. The two fell to the turf, where Jones proceeded to rip off Cooper's helmet and then slam the rookie's head onto said helmet. A bit surprisingly, Jones, who has a history of trouble with the league, is only receiving a fine for his actions, and won't be suspended.

Imagine a quarterback going 42 for 72 for 292 yards, three interceptions and six sacks. Outside of throwing an insane amount of passes, you'd say that wasn't a very good stat line, right? Well, that's what Peyton Manning and Joe Flacco put up COMBINED in an offensive snoozefest in Denver. Up until the final minute, the Ravens and Broncos had just one combined red zone snap. And perhaps fittingly, the final offensive play that wasn't a kneeldown resulted in an interception. These teams played two years ago to start the season and scored 76 total points. This one was a little different.

Marcus Mariota finished his first NFL game with more touchdown passes (four) than incompletions (three). He was taken out in the fourth quarter, with the Titans leading 42-7. 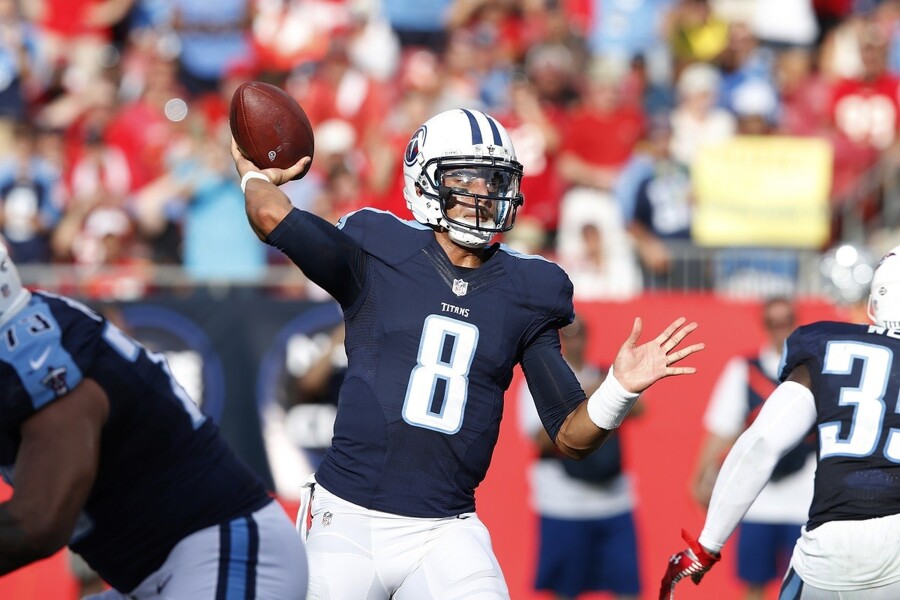 On the other side of the field, Jameis Winston's first career NFL pass was an interception returned for a touchdown.

The Kansas City Chiefs had absolutely no wide receivers catch a touchdown all of last season. Alex Smith threw three touchdowns on Sunday. Naturally, none of them went to a wide receiver.

Up until the final minute of regulation, the Broncos and Ravens – two teams who combined for 76 points to start the 2013 season – recorded just one combined red zone snap.

Eight kickers missed an extra point all of last year. During the off-season, the NFL moved the extra point distance back 15 yards. In Week 1, four teams – Houston, Jacksonville, Cincinnati, and San Diego – all missed extra points from the new distance. And, thanks to the added distance and a pair of penalties, the Browns kicked the longest PAT in league history: a 48-yarder.

Each week, I'm going to pick five games and make a prediction based off the spread. And I'll have a running tally of my record so you can mercilessly mock my inability to make good choices. My picks last week were Green Bay (-6.5) over CHICAGO, Miami (-4) over WASHINGTON, SAN DIEGO (-5) over Detroit, Indianapolis (-1) over BUFFALO, and NEW ENGLAND (-7) over Green Bay. At 3-1-1, this is easily going to be my best week of the year. As always, the home team will be in ALL CAPS.

Outside of a game last season where the Pats sat a ton of their starters, Buffalo has beaten New England exactly once since 2003. I know the Bills are improved, but Brady and co. are still on their vengeance tour.

The Niners didn't look bad on Monday night, while the Steelers sleepwalked through their game with New England. I don't know if San Francisco can actually pull this off, but I think they can keep it within a touchdown.

This is more thinking Cleveland is bad than thinking the Titans can put up 42 points again. Either way, I can't imagine Tennessee losing this game, so they'll probably come out incredibly flat just to spite me.

With DeSean Jackson out a few weeks, the Redskins' already inept offense is hurting even more. St. Louis looked sharp against the Seahawks (six sacks on Russell Wilson), and that defensive line is going to have a field day with a less mobile Kirk Cousins.

Yes, Detroit blew an 18-point lead. But Minnesota only mustered three points and looked lost. I think the Lions' D can handle an offense with less bite.