For 20 years, Troy Aikman has been a consistent voice on FOX football broadcasts. He retired from playing in 2000; the following season he was already part of the network's No. 2 broadcast team, alongside Dick Stockton and Daryl Johnston. More recently, he was FOX's top duo with Joe Buck.

Now, it's time for a change of scenery.

The New York Post reported Aikman is signing a five-year deal with ESPN worth a little more than $90 million. A big selling point: ESPN, which broadcasts Monday Night Football, offered a higher annual salary than Tony Romo received from CBS. Romo signed a ten-year, $180 million contract in February 2020, the richest in broadcasting history. 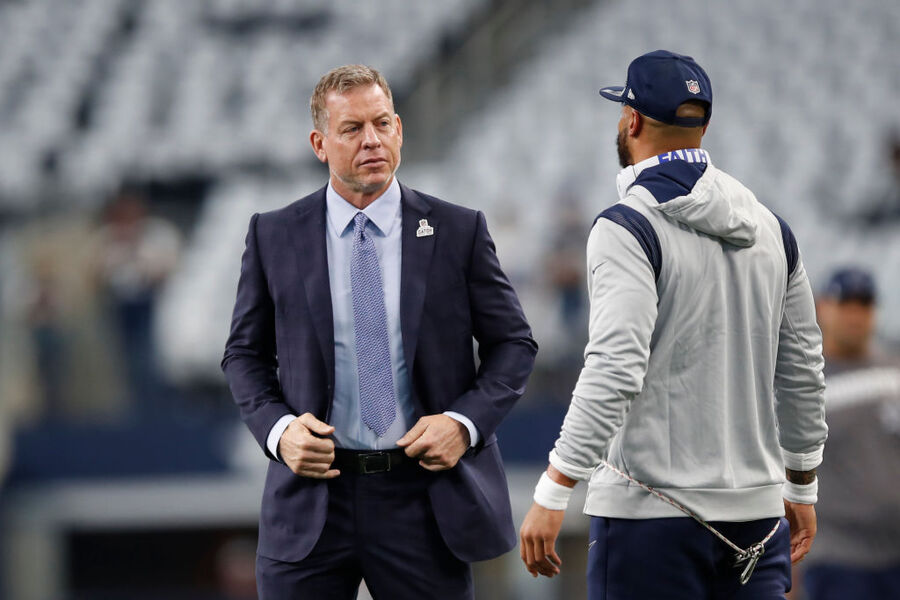 Aikman's move creates plenty of intrigue for the rest of the industry. ESPN will be shifting from 18 to 25 games next season, introducing the need for more broadcast teams. And Aikman's longtime FOX partner could follow him to ESPN—Buck's contract ends after next season.

Other networks are keeping a close eye on the situation. NBC, who just gave Cris Collinsworth a $12.5 million deal to stay on Sunday Night Football (this time with Mike Tirico) could watch Al Michaels depart to Amazon, which has exclusive broadcast rights to Thursday night games.

Amazon and Michaels are close to a deal, but the broadcaster is waiting to see who Amazon brings in as a partner. Some potential options: 49ers GM and former analyst John Lynch, Rams head coach Sean McVay, and former quarterbacks Drew Brees and Tom Brady.

FOX is also airing two of the next three Super Bowls. Should Buck depart, there will be a new voice calling the second of those games. In that scenario, Kevin Burkhardt likely has the inside track to play-by-play duties.

This could be the biggest shakeup of the century in sports broadcasting. On the heels of Romo's deal, Aikman's move makes one thing clear: if networks want to lure top talent, they need to pony up cash—and lots of it.