For years, sports fans around the world have been able to tune into one channel for all their sports-loving needs – ESPN. The worldwide leader in sports has provided fans with all they needed to be up on the latest and greatest action involving their favorite teams –  from game broadcasts to highlights to special programming. In the years to come, that may no longer be the case.

Disney, which owns ESPN, has told the sports network that it needs to cut $350 million from its budget over the next two years, $100 million for 2016 and another $250 million in 2017. The need to cut costs is rumored to be why the network has let personalities like Keith Olbermann and Bill Simmons go and could let more go in the future as contracts come up for negotiation.

So what gives? Have sports suddenly become less popular? Is Disney not making enough money from ESPN? That seems a little hard to believe since the network will be paying a small fortune to air NBA games ($1.4 billion/year) starting with the 2016-17 season.

As it turns out, the world of sports is as popular as ever. It's network television that is not. In the last year, ESPN has lost 3.2 million subscribers, and since 2011 the reach of the network has dropped 7.2 percent; a considerable drop since it was once in nearly 100 percent of the pay-television market (roughly 100 million homes).

To put the losses into clearer perspective, ESPN is actually a rather costly channel for cable providers at $6.04. TNT, Fox News, TBS, and the NFL Network only cost about $1.50. 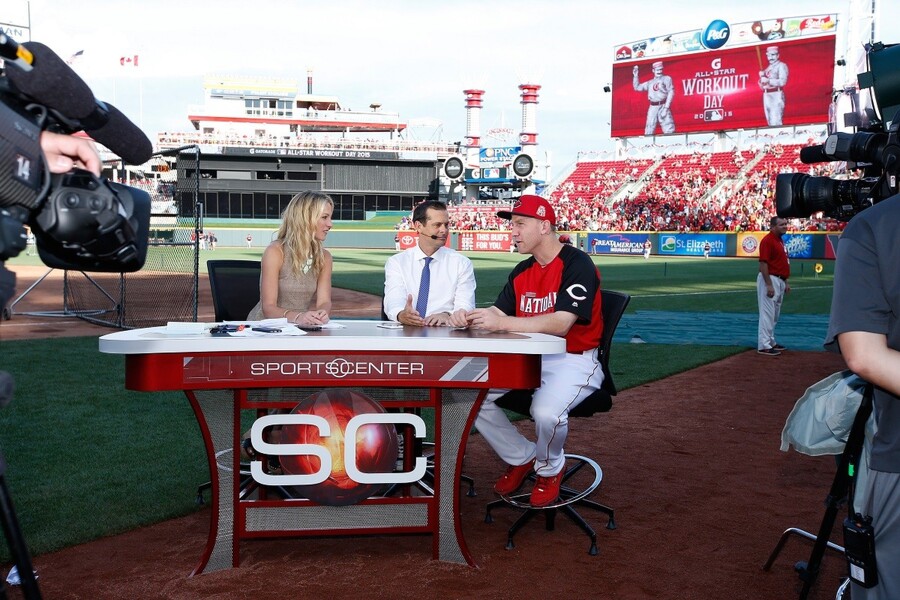 It can't be all about the cost because ESPN is typically bundled along with the other channels for cable subscribers. It's not like ESPN comes as a singular option like HBO or Showtime. So what's the real issue?

Could it be the programming? Could it be that viewers are tired of the various personalities that the network hires offering their opinions up as news and not reporting the news? Are people tired of ESPN working harder to create news than it is to report it?

Maybe. That could explain why more and more people are opting to get their sports news from the internet rather than ESPN. Why bother listening to how much Merril Hodge hates Johnny Maniel when you can go to any number of sites online to find out how the quarterback competition in Cleveland is going?

ESPN has always had controversial personalities though, so there must be more to it than that. There is more competition now with Fox Sports 1 and NBCSN making ratings gains on ESPN. However, Fox Sports 1 announced in June that it is looking to scale back its news operation. It will also be scaling back live reports and reporters will be doing a lot less travelling.

So if the blame can't be put on the competition or the product where can it go? Could it really be that many people are turning to the internet?

Disney could be getting a little greedy. For Disney, owning ESPN was about more than just branching out into the sports world. It was about promoting the Disney name to the millions upon millions of viewers that watched ESPN.

For example, in the past Disney (which also owns ABC) got four minutes of air time during NBA games to promote other programming. Last season, ESPN cut that time down to a minute so it could sell more ad space and increase revenue. This of course did not make ABC and Disney executives very happy.

Disney is putting ESPN between a rock and a hard place. They want revenue to go up, but they want costs cut. To boost revenue you need to sell more air space. With the cost of the NBA contract and the cost of other programming like Monday Night Football ($1.9 billion/year) ESPN needs to do all it can to boost revenue.

Some poor decisions by ESPN executives are certainly not helping matters. ESPN executives came to an agreement with the Dish Network involving its streaming internet television service. If more than three million people ditched ESPN by May 2014 they could drop ESPN from its service. Well… that number has been met.

So what is ESPN to do? Is it going to have to go the route of HBO and bundle all of its channels for one monthly charge? Experts say they would have to charge upwards of $30 month to make what it does now.

Global expansion could end up being the only thing that can save ESPN. As the NFL continues its push to take the league worldwide, college teams play games overseas, and the NBA grows in popularity with more and more international players entering the league the new markets that will become open to advertisers may be just what the virtual doctor has ordered.