Eli Manning Wants To Be The Highest-Paid Quarterback In The NFL, And It Could Happen

A number of quarterbacks have agreed to new contracts this offseason. Russell Wilson signed a big one. So did Cam Newton. Ben Roethlisberger inked a large extension earlier this offseason, and Philip Rivers just signed one with the Chargers. The list goes on, and now there's another quarterback wanting to add his name to the list: Eli Manning. But Manning doesn't want just any old contract. No, he wants to be the highest paid quarterback in the league.

Is he nuts?! Sure, he's won two Super Bowls, but this is a guy who threw for 18 touchdowns and a whopping 27 interceptions just two years ago! For his career, Manning has thrown 20 or more interceptions in three different seasons, and has a career completion rate of just 59%. And this guy wants to be paid more than any other quarterback?

Amazingly enough, it's not that unreasonable. Manning played well last year, throwing for 4,410 yards while racking up 30 touchdowns and just 14 interceptions. That was without his #1 receiver for much of the season. If Victor Cruz can be even half the player he was last year, Manning will have some real threats around him.

And believe it or not, Manning actually already was at one point the highest-paid quarterback in the NFL, at least on an annual basis. Back in 2009, Manning signed a six-year, $97.5 million contract. His $16.3 million annual salary was the most of any quarterback at the time, as he made $100,000 more than Carson Palmer, and $1 million more than Philip Rivers.

Now? Manning, whose contract expires after this season, is the 17th-highest paid quarterback in the league, at $17 million this year. Aaron Rodgers is tops, earning $22 million per year. Wilson and Roethlisberger are right behind him at $21.9 million annually. And Rivers and Newton are earning good cash with $20.8 million per year. Manning is behind guys like Jay Cutler, Ryan Tannehill and Alex Smith, and is barely ahead of Andy Dalton, Sam Bradford and Nick Foles in annual salary. 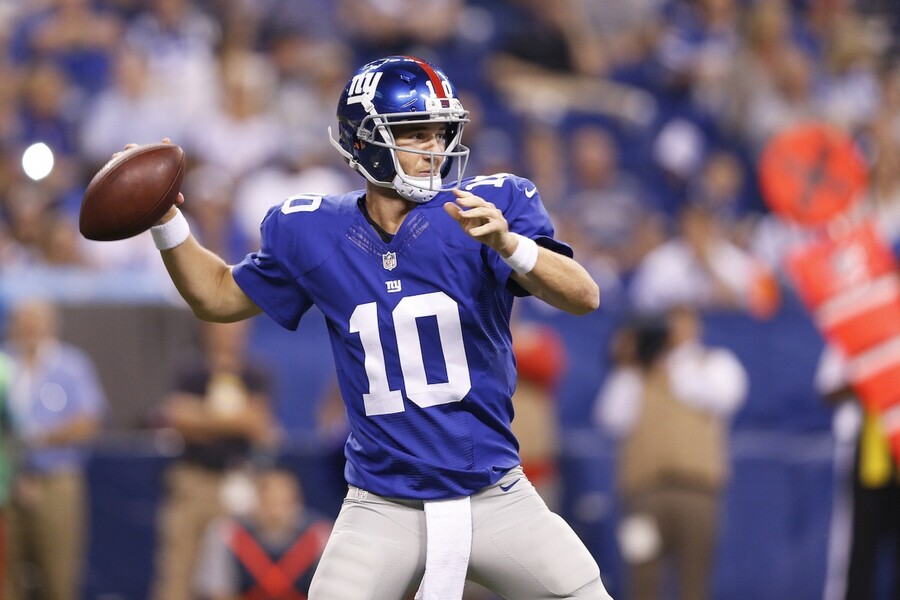 It's pretty remarkable to think how the value of a quarterback has grown over the past six years, but the NFL has certainly been trending towards a pass-first league. In 2009, no quarterback threw more than 600 passes. Last season, six quarterbacks, including Manning. His brother Peyton was only four throws behind at 597. In fact, nine signal callers threw more passes than 2009's top hurler, Matt Schaub.

Simply put, the quarterback position is generally the biggest barometer of success in the NFL. If you've got a good one, you're likely to see consistent success. The Packers, Patriots and Colts are perennial winners, thanks to Rodgers, Tom Brady, and Andrew Luck (and Peyton Manning before him) constantly providing elite play at the quarterback position. Meanwhile, teams like the Raiders and Rams haven't found consistent answers there, and… well, do you remember the last time either one of them made the playoffs? (If you're scoring at home, it was in 2004, when the Rams made it in as a wild card.)

The Giants are likely going to pay Manning pretty close to top dollar, since they know he's going to provide them with good, sometimes even great quarterback play. Yes, he'll occasionally toss an awkward lob pass with his left hand, or will throw into triple coverage to a receiver that's not even looking, but overall, he's better than a lot of other quarterbacks in the league. The Giants will pay him like one, though it'll be interesting to see what the final number is.

Pretend that, for whatever reason, the Giants and Manning can't come to an agreement, the team can slap the exclusive franchise tag on him. That means in 2016, Manning would be making $25 million, and he'd get his wish of being highest-paid in the league again, if only for a season.