Duncan Robinson, Owner Of A $90 Million Contract, Has Played One Minute In The Heat's Latest Playoff Series

Back during the very first game of this year's playoffs, Duncan Robinson was on fire. The Miami guard dropped 27 points — including a red-hot 8-for-9 (88%) from three-point range — as the Heat cruised to a 115-91 victory over the Atlanta Hawks. Robinson cooled off throughout the rest of the series, though. He managed just nine points from Games 2 through 5, including a game where he committed more fouls than he scored points, and an 0-for-5 stinker in Game 5.

Now, the Heat find themselves in a tightly contested 2-2 series with the Philadelphia 76ers. These Sixers have Joel Embiid back on the floor — wearing a cool mask, to boot — and a version of James Harden that looks more like his MVP self than the disinterested, slow version that we saw for most of the regular season.

Meanwhile, Robinson has only seen one minute of action throughout the four games of this series. 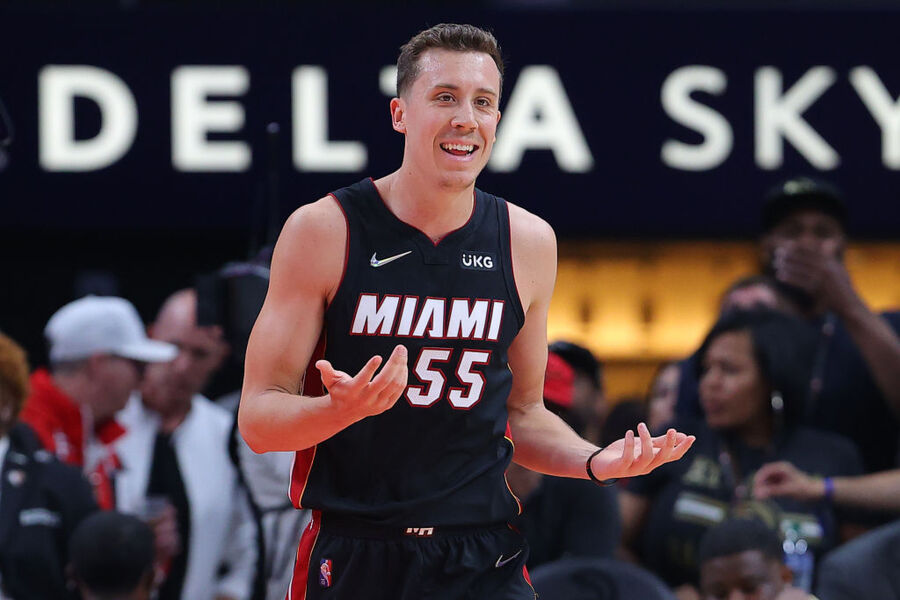 He went from starting nearly every game of the regular season to coming off the bench during the Heat's first-round playoff series. Then, he went from a streaky bench player to not even leaving the bench at all in the Eastern Conference Semifinals against Philadelphia, other than seeing slightly under a minute of action in the Heat's Game 3 loss.

This turn of events is a slight financial problem for the Heat, since Robinson just signed a five-year, $90 million contract last summer. The team paid him $15.56 million this season, which is the fourth-highest contract on the team.

In the span of a month, Robinson has become an afterthought. Unless the Heat are hiding something, he's been a healthy scratch in the three games he hasn't played. The matchup against Philadelphia isn't ideal for him on the defensive end, but it's still an alarming development just how quickly he's fallen out of favor.

Of course, these playoffs aren't over yet. If Miami ends up winning this series and faces either the Milwaukee Bucks or Boston Celtics, Heat head coach Erik Spoelstra might be able to find a fit for Robinson.

For now, though, he's only been a very expensive piece on the bench.