The Tragic Downfall Of The NBA's Delonte West

Former professional basketball player Delonte West made millions in the NBA. He was drafted in the first round of the NBA draft by the Boston Celtics. West played in the NBA for eight years for the Boston Celtics, Seattle Supersonics, Cleveland Cavaliers and Dallas Mavericks. That's a career anyone could be proud of. However, Delonte West spent half of his career playing with an undiagnosed mental illness, running through money faster than he could make it, and marking his days and nights with episodes of mania and depression. Delonte West is bipolar. He is a shadow of the explosive player he was for eight seasons in the NBA.

Signs of trouble first popped up in 2016 when West was spotted wandering the streets of Houston wearing a hospital gown over a plaid shirt. He was barefoot. He looked completely out of it. While he loitered in the parking lot of a Jack In The Box, a fan approached him and asked: "Are you Delonte West?" West replied: "I used to be, but I'm not about that life anymore."

Then earlier today (January 2020), someone filmed a video in Washington D.C. that showed an extremely destitute-looking Delonte getting beaten up in the middle of the street. A later video filmed by police who had him in cuffs showed Delonte rambling and screaming. 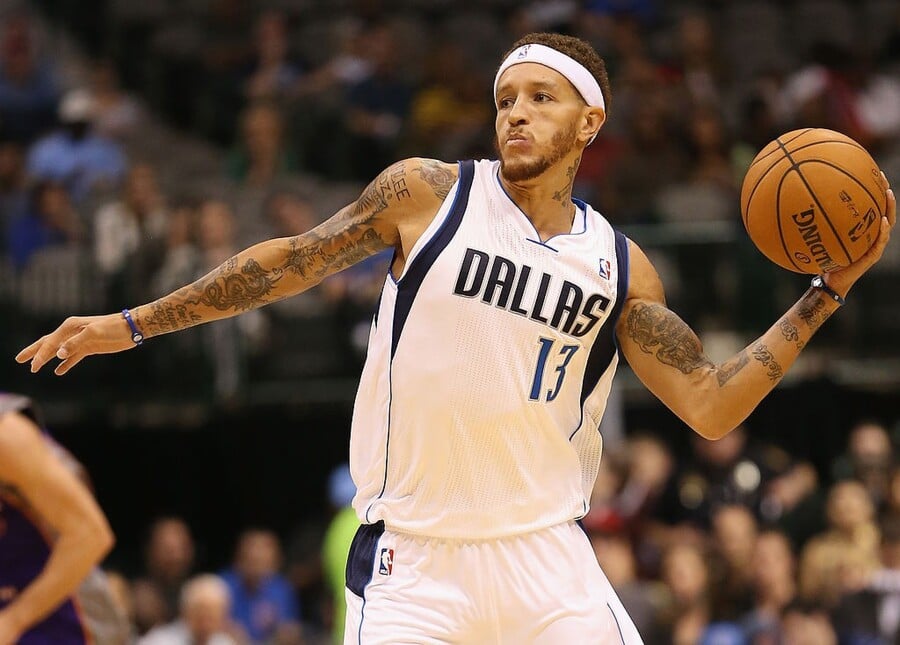 Delonte West was born on July 26, 1983, in Washington, D.C. His childhood was littered with mental health issues. He tried to kill himself several times and landed in a children's hospital on several occasions after he swallowed pills and cut himself. He attended Eleanor Roosevelt High School, where he played basketball. He was named the Washington Post's All-Met Basketball Player of the Year, due to his averages of 20.2 points, 6.5 rebounds, 3.9 assists, and 3.1 steals per game.

West played college basketball at Philadelphia's St. Joseph's University. In college, he averaged, 18.9 points and 6.7 assists per game. He led the Hawks to an Elite Eight appearance in the NCAA Tournament. He left college after his junior season and was drafted with the 24th overall pick in the 2004 NBA Draft by the Boston Celtics. He is now 32 years old.

In 2008, West was diagnosed with bipolar disorder following a preseason Cavaliers game, in which he exploded at a referee. This incident followed several occasions where he was checked out, missed practice, or left practice in a rage. He realized he needed a break. West left the Cavaliers for two weeks and returned home to Washington, D.C. to seek counseling. He also started taking medication to stabilize his mood disorder.

When he returned to the team, he was reenergized. West ended up averaging 11.7 points per game that season. Cleveland eventually collapsed in the playoffs. A rumor began to circulate that said the Cavaliers lost because LeBron James had discovered that West was romantically involved with his mother. West has denied this story repeatedly, though the rumors dog him to this day.

Then, on the night of September 17, 2009, West was pulled over on his three-wheeled Can-Am Spyder motorcycle. He told the officer he was carrying a handgun in his waistband. A search of West and his vehicle revealed three guns- a 9mm handgun in his waistband, a .357 magnum strapped to his leg, and a shotgun in a guitar case slung across his back. All three guns were loaded.

West was sentenced to eight months of unsupervised home detention, two months probation, and 40 hours of community service. During this period, West married his childhood sweetheart. He divorced her a month later.

It is impossible to view that incident and most of West's career that followed without the angle of his mental illness. He blew through money. At one point during the 2011 NBA lockout, he applied for a job at Home Depot because he was out of money. He worked at a Brandywine furniture store and sold boxed sets of knives at a stand at Costco. He cracked strange jokes on Twitter such as:

"Broke down in the ATM line. 25 cars behind me and I already reached my daily limit… I'm broke n my cars broke. Where's my therapist???"

The Dallas Mavericks were the last NBA team to take a chance on West. That lasted less than a year. He was suspended twice in October 2012 for behavioral issues, then waived by the team. He was renting an apartment in a high rise apartment building in Dallas with a balcony that overlooked American Airlines Arena. In the days following his dismissal from the Mavericks, West sat up there and watched as fans filed into the arena. He was still sitting there, staring, catatonic, when the fans left the arena 2 ½ hours later.

It was during those dark post-NBA days that West met his future wife, Caressa Madden, through a mutual friend. They were immediately inseparable. The couple headed back east together to West's home on the banks of the Potomac in Maryland to wait out his basketball unemployment. The situation that winter inside West's $1 million, eight-bedroom house was bleak. The furnace went out and West couldn't afford a new one. He filled the rooms with space heaters. The master bedroom alone needed four of them. Caressa was pregnant. He heated water on the stove so that she could take a warm bath.

West proposed to Caressa by cutting off a piece of a jump rope he found in the garage and wrapping it around her finger:

West painted his basement black and spent his days down there planning and plotting ways to make a quick buck. He tried to figure out which of his possessions he could sell. Most importantly, he tried finding ways to fill the long basketball-less hours of the day.

He threw out all of his basketball memorabilia. He didn't want any reminders of his failed career.

And then the phone rang. It was January 2013 and he had an offer to play basketball again in Dallas. However, West didn't understand that he wasn't being picked up by the Mavericks again. Rather, he was going to be playing for the D-League's Texas Legends. The D-League is the NBA's official minor league. West would have to work his way back and that didn't initially sit well with him. He didn't report for practice for several weeks and when he did, he was angry and resentful. He would get emotional and stalk off the court. When he did play, the coaches liked what they saw. No one has ever debated West's talent.

Slowly, West began to accept that no team was going to call him with a multi-year, multi-million dollar NBA contract. By this time, his son Cash had been born. He had a wife and a family to support. West began to do whatever it took to make ends meet. In the 2015 season alone, he played with the L.A. Clippers' summer league in Las Vegas, played in China and Venezuela, and considered playing in Turkey and Puerto Rico before heading back to the Legends. He played three games before a hairline fracture in his left hand ended his season.

Now, a year later, West appears in a fast-food parking lot, looking bizarre and disheveled. Reports have surfaced that West has decided that his bipolar diagnosis was mistaken. He's gone off his meds. That isn't uncommon for bipolar people. People afflicted with that particular mental illness are known for not keeping up with the meds that stabilize their moods. Bipolar disorder is a life-long battle.