Deontay Wilder Net Worth Vs. Tyson Fury Net Worth: Comparing Career Earnings Ahead Of Their Epic Rematch

Tonight in Las Vegas at the MGM Grand, American boxer Deontay Wilder faces off against Irish/British boxer Tyson Fury in what is a highly anticipated rematch. For those who do not follow boxing, Tyson and Deontay first faced each other on December 1, 2018. Deontay entered that fight with a record of 40 and 0. Fury was mounting somewhat of a comeback to the boxing world after being lost in the woods for a few years, binging on drugs and alcohol. To the shock, dismay and ridicule of the boxing world, Deontay/Fury I ended in a DRAW. Skeptics scoffed at the results. Allegations that boxing is rigged rang across twitter and internet sports media. Why would it be rigged? To set up this very rematch of course! Why do something once when you can do it twice and make double the money! And speaking of money, what are the net worths and career earnings of Deontay and Tyson as of this writing? Let's take a look!

Deontay Wilder Net Worth: The 34 year old Deontay Wilder heads into the fight with a record of 43 – 0 – 1. That's 42 wins and one draw out of 43 professional fights. He didn't originally intend to become a boxing champion. In high school Deontay dreamed of playing basketball and/or football for his dream school, The University of Alabama. Unfortunately Deontay's girlfriend became pregnant and their baby was born with a rare defect called Spina bifida. His daughter's medical needs and a general desire for him to be nearby forced Deontay to give up the idea of attending The University of Alabama and killed his dream of playing division 1 basketball and football. Instead he enrolled at Shelton State Community College where he took up boxing. Unlike most boxers who begin training in their teens, Deontay put gloves on for the very first time when he was 20.

After putting up a 35-5 amateur record, Deontay turned pro in November 2008 when he was 23 years old, winning his first match by TKO. In 2009 he won 9 straight matches. He won each of those fights in the first round. Between 2009 and 2012 he wracked up a 25-fight winning streak. All of those bouts were won by the fourth round. His win streak continued through 2018.

Deontay was guaranteed a minimum of $4 million when he first faced off against Tyson Fury in December 2018. A sold-out crowd and 320,000 pay-per-view buyers watched the infamous match that ended in a draw. Both Tyson and Deontay earned a total of $10 million from the match when all bonuses were calculated.

In May 2019 Deontay earned a total of $10 million defeating Dominic Breazeale with a first round knockout.

In November 2019 he earned $20 million defeating Luis Ortiz in their rematch.

Heading into the Tyson Fury rematch, Deontay's career earnings top $42 million, before taxes, fees, lawyers and managers. We peg Deontay's net worth without his Fury guarantee at $20 million.

For the rematch, both Fury and Deontay are guaranteed $28 million PLUS a 50/50 cut of pay-per-view profits. That's a total guarantee of $56 million. The pay-per-view costs $80. Roughly 325,000 people paid for their first fight. In order for the boxers to earn additional money on top of their guarantees, they'll have to have at least 700,000 pay-per-view buys. Actually that would just break even.

When you take into account his $28 million guarantee, Deontay Wilder's career earnings are $70 million. We peg his net worth with the guarantee at $30 million. 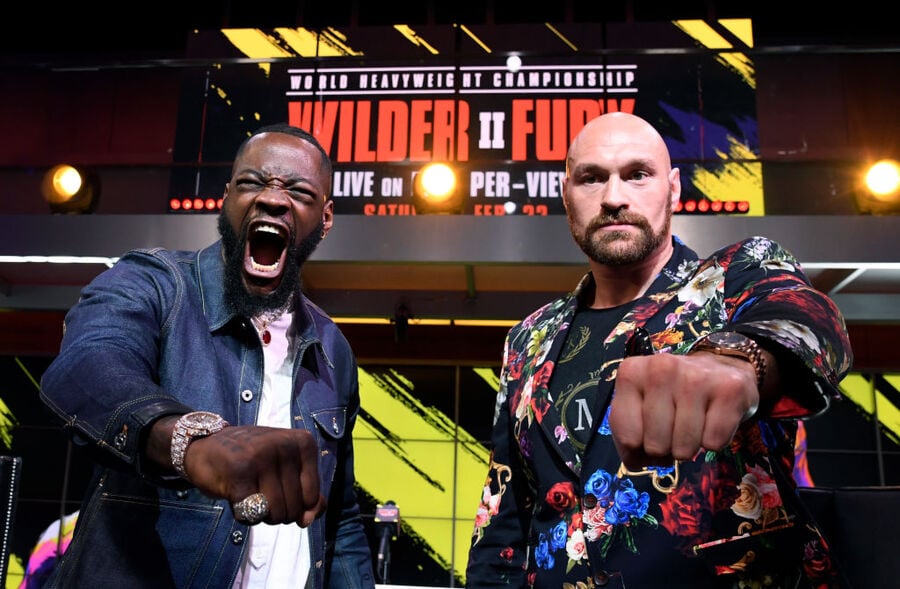 Tyson Fury Net Worth: The 31 year old Tyson Fury enters the ring tonight with a career record of 29 – 0 – 1. Twenty of his wins are by KO. His only blemish is the draw against Wilder. Tyson was born into an Irish Gypsy family with a long history of boxing. He was born one month premature and given a bleak chance of survival by doctors. But he was a fighter and survived and as such his father decided to name him Tyson, an homage to the then undisputed heavyweight champion of the world, Mike Tyson.

As a kid, his mother was frequently pregnant. She was pregnant at least 14 times, with only four surviving children. When Tyson was nine, his mother gave birth to a daughter who tragically died a few weeks later. The loss had an enormous impact on Tyson. His father chose to focus Tyson's anger and energy on boxing. Tyson's father would go on to be his coach until 2011 when he was sent to jail.

In 2015 Tyson was arranged to face off against Wladimir Klitschko in a world heavyweight title match. Odds-makers favored Wladimir at 4 to 1 odds. After 12 rounds Fury was named the unanimous winner by decision. Fury earned $7 million for his work while Klitschko earned around $23 million.

At this point Tyson was primed for an enormous payday to rematch Klitschko. A rematch was scheduled for 2016. Unfortunately, Tyson entered a deep depression and downward spiral in the months following his win. He gained more than 100 pounds and was declared "medically unfit" for a second fight. After testing positive for cocaine, the fight was postponed indefinitely and Tyson was forced to vacate his titles.

He took roughly two years away from boxing and mounting a comeback.

He returned to the ring in June 2018 with a win against Sefer Seferi. In August 2018 he defeated Francesco Pianeta.

In December 2018 Tyson faced off against Deontay Wilder for the first time. Tyson was guaranteed $3 million before the fight but ultimately earned $10 million from the draw. Amazingly, Tyson reportedly donated his entire paycheck to charity.

Heading into the Deontay Wilder rematch, we estimate Tyson's career earnings at $14 million. Outside of his Deontay guarantee his net worth heading into the fight would be around $8 million.

When you take into account the $28 million guarantee, Tyson's career earnings after the rematch will be $42 million. After the fight we estimate his net worth will be $20 million.