Larry Bird, John Stockton, Michael Jordan, Steve Nash, Rip Hamilton – What do these five have in common? They're some of the best mid-range jump shooters in the history of basketball.

The mid-range jump shot, while quickly falling out of favor with today's NBA stars, remains a valuable weapon for those who perfect it. DeRozan may be making it his calling card.

The All-Star Raptor signed a five-year, $139 million deal this past off-season, making him one of the highest-paid players in the league. Though DeRozan averaged 23.5 points per game and led the Raptors all the way to the Eastern Conference Finals, there was still a great deal of skepticism when the Raptors extended the offer. But no one seems skeptical anymore.

So far this season, the shooting guard averages 29.2 ppg (third in the league), along with 5.3 rebounds and 4.1 assists. He was the first player since Michael Jordan to start the season scoring 30 or more in 8 of his first 9 games, and he has the Raptors sitting just one game back from the Cavs for first place in the East at 17-7. Last year, DeRozan shot 44% from the floor; this season, he shoots 48%.

Chris Farr, who has been DeRozan's personal coach since 2009, believes that much of this has to do with DeRozan's desire to improve. Farr recommended that DeRozan stick to his strengths and shy away from the ever-tempting 3-point line, and the result has been tremendous. DeRozan averages more than 10 mid-range jump shot attempts per game, and he shoots 46% from that area. He's by far the top mid-range shooter in the league in terms of shot attempts, and considering he's one of the highest scorers, it must be working. 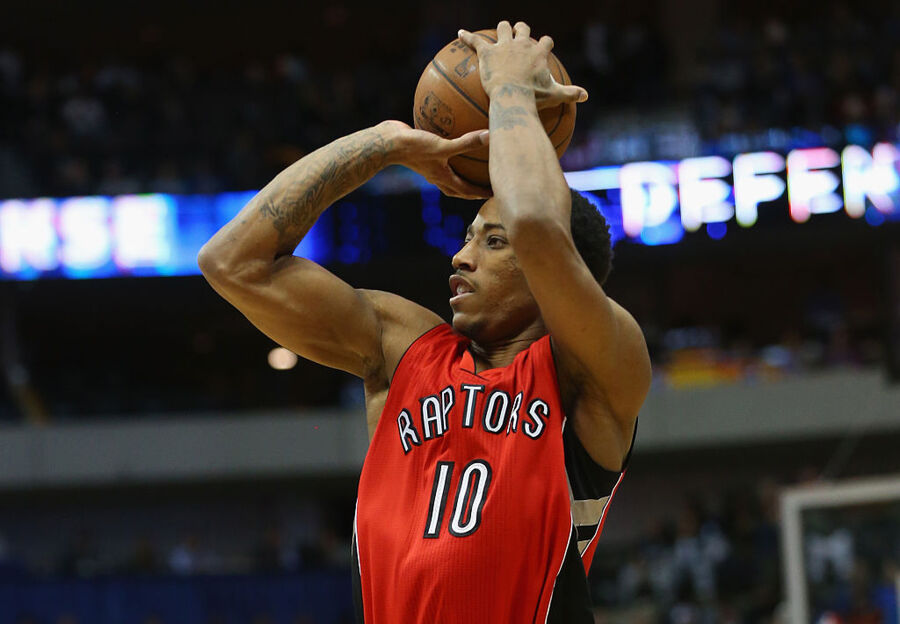 DeRozan is so dedicated to improving his game that when he went to Rio for the Olympics this summer, he paid Farr, along with his personal trainer Jason Estrada, to come with him. He would work out on his own, practice with the team, then often go back for another workout at the end of the day! According to Estrada, most other players on the U.S. Olympic team didn't bring personal coaches or trainers.

"He decided to go the extra mile and say, 'You know what, I wanna make sure that I'm staying on top of my game every single way possible, off the court, from a strength standpoint, to prepare me for the season," Estrada said.

Farr spoke glowingly of DeRozan's work ethic and competitive spirit, particularly regarding the way he stepped up his game while surrounded by all the talent on the U.S. team.

"He had been around all that greatness," he said. "I mean, the guys, [the] accolades, MVPs and scoring champions, and his desire to be a part of that. He's hungry for it. He worked for it, and I'm telling you, his desperation to make the Olympic team, to be an All-Star, to lead his team to a championship, that's what pushed him over. His desperation made him determined to work harder, and that's what he did."

Perhaps the most important improvement that DeRozan has made to his game is on the defensive end. One of the primary reasons that the Raptors were ousted in six games by LeBron James and the Cavs in the Eastern Conference Finals was their inability to shut down King James. DeRozan's defensive shift took place largely in Rio, where his scoring wasn't as important to such a stacked offensive squad.

"You just find a new passion, and I found it during the Olympics," DeRozan said. "(Team USA) didn't need me for scoring or none of that so you learn to do other things that make me a better player and try to carry that over to my team."

The Raptors' coach certainly noticed, and made it clear to DeRozan that he wanted to see the same defensive intensity shine in the 2016-17 season.

"I told him this summer: He told on himself with the U.S. team, I said, 'How come you can go play for Mike Krzyzewski and play defense but you come here and we have to hide you defensively?'" said head coach Dwane Casey. "When he makes the muscle he can get down and guard and defend. That's the growth of DeMar DeRozan, is him saying, 'Let me guard that guy?' And taking it on as a challenge."

It's certainly true that DeRozan has put the time in, and the numbers so far this season have proven it. In the end, the true test will be this season in the playoffs. Will the Raptors be able to dethrone the King? If DeMar DeRozan has anything to say about it, they will.